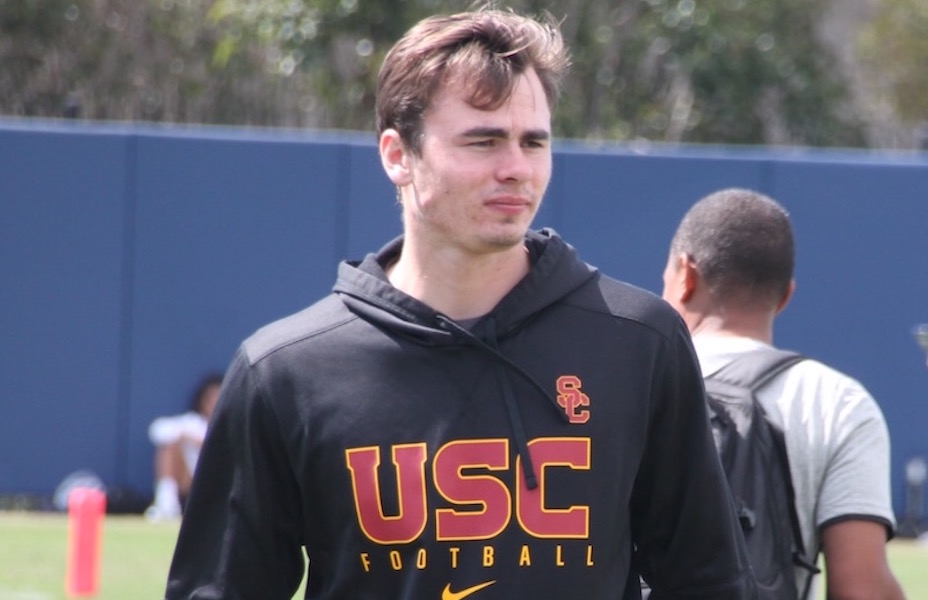 The Not So Obvious: Walking the Los Angeles Chargers camp in a very visible USC shirt, JT “obviously” was making his recruiting presence felt to many of the Trojan recruits for the Class of 2019 and beyond. Anybody who thinks that JT’s presence doesn’t have a huge recruiting impact even this early in the process must have fell off the turnip truck one too many times. Here’s a little O/NSO secret, Daniels physical appearance and personality interaction is a huge impact and the John McKay Center must be smiling.

The Obvious: One of the premier USC recruits for the Class of 2019 is former JT Daniels’ Mater Dei teammate Bru McCoy, a national recruit if there ever was one, was one of many high-level talents at Chargers’ facilities.

The Not So Obvious: McCoy (6-3, 205) will naturally look at all his recruiting options, but the Trojans are said to be in prime position to see him in a cardinal and gold uniform in the future. The question will be where the two-way prep superstar plays – wide receiver, tight end, linebacker? You don’t think that Bru wouldn’t mind again being on the receiving end of JT Daniels passes at the collegiate level? The O/NSO isn’t much of a gambler, but it isn’t a gamble to say when it’s all said and done, Bru most likely will be wearing cardinal and gold.

The Not So Obvious: At the Opening Regional, Kayvon (6-5, 235) told recruiting services that he was very interested in being a Trojans. What really makes Thibodeaux a little more than your run-of-the-mill top shelf recruit is his focus on academics. He says he wants to be a lawyer when his playing days are over, and proudly says he is close to an overall 4.0 GPA. To validate his value as a true scholar-athlete, former Trojans’ All-America defensive lineman Willie McGinest, a camp counselor, said that he was not only impressed with Kayvon’s natural ability, but the kid’s desire to learn and put into practice what he learned from the celebrated Trojan legend.

The Not So Obvious: Dollars, who was named the Opening Regional running back MVP, is another major Trojan target and before the negative recruiting beings about the depth of the USC running backs, look again at spring practice where the Men of Troy opened spring ball with only one healthy running back, senior Aca’Cedric Ware. With sophomore Stephen Carr on the mend after back surgery and missing spring ball and sophomore Vavae Malepeai hoping to return next week after a hamstring issue, the Trojans’ tailback depth is looking for talented bodies. With Dollars (5-10, 185) showing extraordinary quickness, you can imagine that the Trojans will be looking for a Bush/White déjà vu. With big back Markese Stepp arriving from Indianapolis in the summer, you can picture a Dollars/Stepp future cardinal and gold backfield.

The Obvious: There was quite a USC presence at The Opening Regional at Chargers facilities last weekend.

The Not So Obvious: In case you missed it, WeAreSC reported the following Trojans as making quite a representation: Willie McGinest, Curtis Conway, Chris Claiborne, Adoree’ Jackson, JT Daniels, Amon-Ra St. Brown, Ajene Harris, Marvin and C.J. Pollard and Pie Young. It was a good depiction of cardinal and gold – past, present, and future.

The Obvious: One of the Trojans’ major recruiting needs for the Class of 2018 is offensive linemen.

The Not So Obvious: With the Trojans looking to become more physical along the offensive line, one of the ways to accomplish that goal is to recruit bigger, faster, and more physical players. One of those the Trojans are looking at is Harbor City (Calif.) Narbonne OT Jonah Tauanu’u, who the O/NSO has seen in person and looks anything but a returning high school senior. The kid passes the eye test. At 6-5, 275 give-or-take, he is a Neil Callaway target.

The Obvious: Most of the above players mentioned above all received invitations to The National Opening in the summer, which will take place in Dallas and not at Nike Headquarters in Oregon.

The Not So Obvious: One outstanding player last weekend that didn’t make the initial invitation to Dallas was Corona (Calif.) Centennial defensive end Drake Jackson (6-4, 260). Although Drake didn’t receive a first invitation, it would be shocking if he isn’t invited in the near future. And BYW, it is known that the Jackson family is very pro USC.

The Not So Obvious: You have to wonder, besides the obvious financial increase, how much playing in the stadium of his college career (the Coli) and the comfort of playing in the shadows of his university, a comfort zone, had in his decision to return. Or maybe he was excited to play a season in the new, renovated Coliseum in the near future (wink). According to NFL.com, Robey-Coleman will receive a three-year, $15.75-million contract, with $8 million guaranteed.

The Not So Obvious: Good for Marqise, who made quite an impression this past professional season. As all Trojans know, Marqise – when healthy – is almost unstoppable. Overcoming some injuries in the NFL, this last campaign showcased much of the promise many Jag fans saw when the former Trojans’ All-America was drafted. According to ESPN, Lee signed a four-year deal with a $38 million maximum value and $18 million guaranteed. Wowzers!

The Obvious: And finally, Devon Kennard is a former Trojans’ outside linebacker/defensive end.

The Not So Obvious: Congrats to free agent Devon on signing a three-year deal with the Detroit Lions for a reported worth of $18.75 million. After a Trojans career that tested his character through injury and position changes, the relentless, hardworking Kennard is certainly deserving of his new monetary gain. From a Giant to a Lion, his pocketbook is now one giant lion.