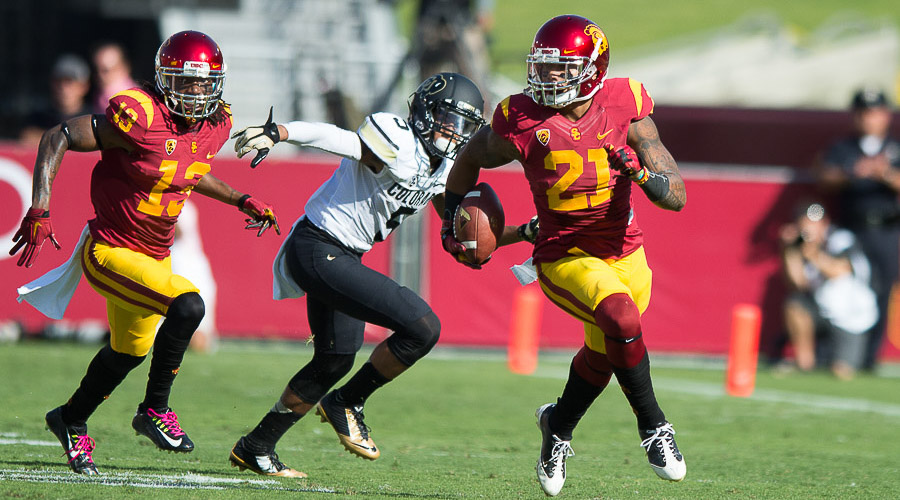 The Obvious: Having begun on Friday and continuing through the weekend, it’s a big happening in the world of USC football with the NFL Combine in Indianapolis, which began on Friday, USC’s all-important Junior Day on Saturday, and The Opening Los Angeles Regional set for Sunday at Redondo Beach High.

The Not So Obvious: It’s the cycle of a football life as former Trojans work to impress the NFL scouts in the Midwest, a Junior Day on campus filled with high priority recruits, and concluding on Sunday with The Opening Los Angeles Regional, which brings together an all-star collection of returning high school players -some already committed to the Trojans and some being hotly pursued by Clay Helton’s staff – showcasing their ball and blocking skills.

The Not So Obvious: For those wishing to watch the NFL Combine this weekend, it’s being televised on the NFL Network from Feb. 23 – 29.

The Obvious: Linebacker Su’a Cravens (above photo – No. 21) is an NFL Combine Trojans participant.

The Not So Obvious: If you believe the various scouting reports and mock drafts, Cravens is not quite the elite draft pick that he thought he was finishing the season. The reason, of course, is that nobody is quite sure where he plays – linebacker or safety and at what weight? Cravens, however, is brimming with confidence and thought of himself was a potential first-round pick. If you go by the experts, he is currently not a first-rounder, but perhaps a strong showing at the combine will turn some heads.

The Not So Obvious: Already answering questions from NFL scouts before the action began, Kessler is hoping to prove that he’s more than a short-term NFL backup. If you’re talking about mixed reviews, then you have to be talking about Cody Kessler. Is he a product of a system or is he what you see is what you get? Nobody disputes his leadership qualities; he proved that a long time ago. The real question is can he move an NFL offense. Many see him drafted in the mid rounds, and that might be a best-case scenario. The jury is currently out on Kessler.

The Obvious: Running back Tre Madden is an NFL Combine Trojans participant.

The Not So Obvious: Some were surprised that the oft-injured Trojans running back was even invited to the NFL Combine. On Friday, he did some early bench press work (24 reps) and entertained with a 32-inch vertical leap and 108.0 broad jump. Nobody really questions his potential, and that is mainly what you saw in his career – potential. The O/NSO thinks that until he dons the pads either as a draft choice or a free agent, Tre will need to prove he is durable.

The Not So Obvious: A big a mystery to NFL scouts, Seymour seemed to have either been injured or in the doghouse at Troy. His Trojans career was filled with highs and lows – potential as opposed to production – but he did have his moments. If you go by one theory that he was given a bum deal by former Trojans secondary coach Keith Heyward, then you have a reason that Seymour’s ability was stymied. Against elite receivers at the NFL combine, Seymour will be able to showcase his athletic ability. Scouts will be looking for his recognition and man skills.

The Not So Obvious: If there are questions marks, it is how well is Tuerk recovering from knee surgery? On Friday, he did participate in the bench press (22 reps), so he is doing what he can. From the day he was a prep superstar at Santa Margarita (Calif.) Catholic, the pundits have said he had NFL written all over him. At USC, he had to play numerous positions, with center being the last stop and the most logical stop for a pro career.

The Not So Obvious: The great enigma, nobody questions his warrior mentality, and he has already stood out in Indianapolis with a “unique” new haircut and attaining a top 5 mark for the bench press (26) for running backs. With the NFL moving away from a true fullback, can Vainuku be a special situation running back? There is a school of thought that Vainuku could be a punishing NFL running back with some claiming he didn’t get a chance to show what he could do at USC. He did run a 4.66 in the 40 and 26 bench press reps on Friday at the combine, so that will enhance his status before the scouts. There seems to be general agreement that the best chance of Soma sticking with an NFL team is his acumen on being a superior player on special teams.

The Not So Obvious: Although most believe he had a successful senior season by being named All-Pac-12, there are some that believe that he still has a lot to prove to make it in the NFL. There were too many times when opposing offense didn’t consistently have to double-team Woods at the point of attack. Usually, that means the opposition believes its center can handle him. Woods was, however, impressive at the NFLPA Collegiate Bowl and has the right body build to play a nose tackle in the NFL. The combine will perhaps answer some questions that are still on the table before mini camps after the April draft.

The Obvious: Saturday will be Junior Day on the Trojans campus.

The Not So Obvious: With Clay Helton’s staff fully assembled and after hours of recruiting organizational meetings, the staff will get a huge opportunity to put their best foot forward in front of some really high priority recruits. No question they will be trying to impress on campus the likes of Class of 2017 prospects DL Haskell Garrett (Las Vegas, Nev./Bishop Gorman), OL Wyatt Davis (Bellflower, Calif./St. John Bosco), OL Chuck Filiaga (Murrieta, Calif./Vista Murrieta), and WR Osiris St. Brown (Santa Ana, Calif./Mater Dei). Garrett is currently committed to Ohio State.

The Obvious: A number of Trojans already committed for the Class of 2017 will on hand at Junior Day.

The Not So Obvious: Among those that have already committed to USC and are expected to be on campus on Saturday include S Bubba Bolden (Las Vegas Nev./Bishop Gorman) and RB Stephen Carr (Fontana, Calif./Summit).

The Obvious: Keyshawn Johnson is one of USC’s all-time receivers.

The Not So Obvious: Expected to be in attendance for Junior day will be WR Keyshawn Johnson Jr. (Calabasas, Calif./Calabasas), who is the son of the former Trojans receiving great.

The Obvious: There will be a number of high valued Class of 2018 recruits at Junior Day.

The Not So Obvious: Among the visitors on Saturday will be recently announced Trojans commit QB Matt Corral (Westlake Village, Calif./Oaks Christian).

The Obvious: Sunday will be the annual Nike The Opening Los Angeles Regional at Redondo Beach High.

The Obvious: And finally, a reminder that today, Friday, is the last day for Trojans season ticket holders to renew for the 2016 season.

The Not So Obvious: The cost seems to be going up for a couple of season tickets, which is now slightly less than $1,000 for those that do not subscribe to support groups. That’s a lot of money for most folks, which makes one wonder how much higher the cost will go, especially when the Coliseum is finally renovated and the fear of a personal seat license being a possibility.