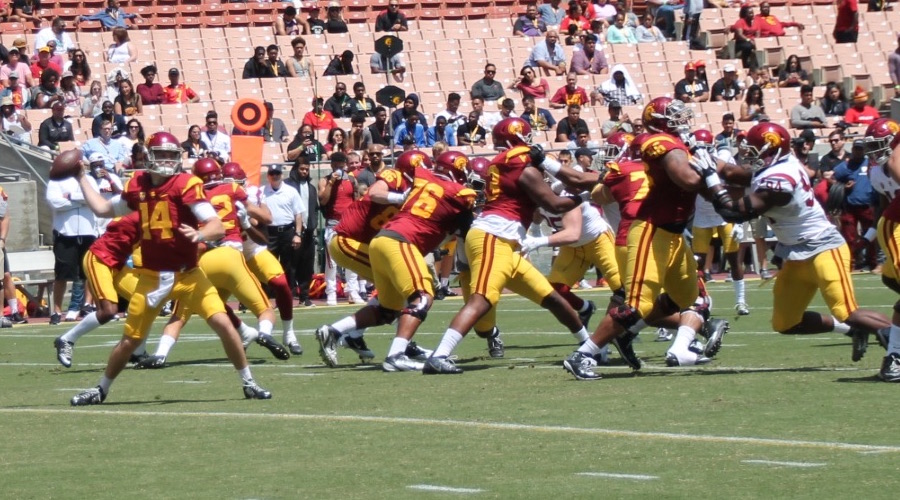 The Obvious: Last weekend marked the official end of Pac-12 Conference spring football practices and spring games and the beginning of the long wait until the first kickoff in late August.

The Not So Obvious: As it pertains to Pac-12 spring football games, there were a variety of formats. The USC Trojans chose to make this end-of-spring activity a noontime Coliseum presentation, a combination practice, situational scrimmage (with limited tackling), fan fest, and post-practice autograph session. A number of rival schools had similar plans or had some sort of alternative design to please both fans and alumni. In order of next season’s Trojans schedule, below are the basics of each opponent’s spring game and some of the notable performances and comments.

The Obvious: The Trojans open the 2017 season on Sept. 2 against Western Michigan in the Coliseum.

The Not So Obvious: The Broncos held their spring game on Saturday, April 15, under first-year head coach Tim Lester, a former Western Michigan quarterback. The Broncos held their annual “Wooden Oar” spring game at Waldo Stadium. Actually, it wasn’t a spring game because no score was kept and several key returners did not suit up for the “Brown and Gold” because of precautionary reasons. Western Michigan lost significant talent off last season’s nationally ranked team (13-1), so the focus for the afternoon was primarily on the quarterback competition between 6-foot, 200-pound dual-threat junior Tom Flacco, the only WM QB with actual game experience and brother of Joe Flacco, and 6-foot-2, 205-pound redshirt sophomore Jon Wassink. Flacco figures to be the guy.  Both quarterbacks look to replace departed Zach Terrell, a four-year starter who finished with a program-record 12,100 passing yards while leading the Broncos to three straight bowl appearances in his career. FYI, Terrell recently signed as a free agent with the Baltimore Ravens.

The Obvious: On Sept. 9 in the Coliseum, the Trojans entertain the Stanford Cardinal in the Pac-12 opener for both teams.

The Not So Obvious: The Cardinal held their spring game on April 15. Senior quarterback Ryan Burns replaced sophomore K.J. Costello (5 of 13) and led the Cardinal offense to a 37-30 victory over the defense at Cagan Stadium. Burns completed 10 of 15 passes and pitched a 38-yard touchdown to sophomore receiver Donald Stewart. Anticipated senior starting quarterback Keller Chryst did not play due to his recovery from a severe knee injury suffered in the Sun Bowl, but Chryst is expected to be ready for the 2017 opener with Rice in Sydney, Australia. With former All-America tailback Christian McCaffrey on to the NFL, expected junior Cardinal tailback starter Bryce Love did not play to heal from his injury. However, the Stanford running game didn’t suffer in the spring game, as junior Cameron Scarlett had an impressive 65-yard touchdown run, sophomore Dorian Maddox exploded for a 58-yard jaunt, and sophomore Trevor Speights contributed with a 33-yard run. Afterward, Cardinal head coach David Shaw called his tailbacks “a phenomenal group.”

The Obvious: In the third game on Sept. 16, the Trojans play another non-conference game against the Texas Longhorns, the first trip to the Coliseum for the Horns since 1967.

The Not So Obvious: Under first-year head coach Tom Herman, formerly of Houston, the Longhorns held their spring game before a big turnout at Darrell K. Royal Stadium on April 15. With the score tied 51-51, Herman placed the ball down at the 2-yard line with a fourth-and-goal, sudden-death situation. The Orange team came up with a big stop, stuffing freshman Toneil Carter’s rush attempt to give them a one-point win. Longhorns’ sophomore quarterback Shane Buechele, son of former Anaheim (Calif.) Servite High QB and major league baseball player Steve Buechele, passed for 369 yards on 23 of 39, two touchdowns, and one interception. The game was scored offensive points vs defensive points.

The Obvious: In game four on Sept. 23, the Trojans embark on their first road trip with a Pac-12 encounter with the North Division Cal Bears under new head coach and former Trojans defensive coordinator Justin Wilcox.

The Not So Obvious: Played on April 22, the Cal Bears spring game basically consisted of a 100-play practice scrimmage, which was preceded by a series of individual drills. True freshman DB Elijah Hicks, who enrolled over the winter, was a standout in the scrimmage, causing several pass break-ups and an interception. The Bears worked on a revamped offensive line and pondered whether to have a defensive line with a four-man front or a three-man front. It figures that the three-man front is going to be the foundational set with a lot of movement along the line. Junior safety Quentin Tartabull also performed well. Redshirt junior quarterback Chase Forrest was 15 of 29 for 189 yards, one TD, and two interceptions while redshirt sophomore quarterback Ross Bowers was 18 of 29 for 168 yards, three TDs, and no interceptions. Redshirt sophomore wide receiver Kanawai Noa had eight receptions for 112 yards, leading 14 different receivers with at least one catch.

The Obvious: In game five, the Trojans continue on the road with a Friday night, Pac-12 visitation on Sept. 29 at Washington State.

The Obvious: In game six, the Men of Troy return to the Coliseum on Oct. 7, hosting the Oregon State Beavers in a Pac-12 conflict.

The Not So Obvious: The Beavers held their spring game on March 18. Junior tailback Ryan Nall started the 100-play workout by rifling a 60-yard scoring pass to senior Junter Jarmon on a well-executed option play. Redshirt sophomore tight end Tuli Wily-Matugi finished the festivities with a diving catch of a 2-yard pass from senior Darell Garretson in the back of the end zone for the final score. The Defense edged the Offense, 72-69, using a modified scoring system that rewarded touchdowns, 20-yard gains, interceptions, defensive stops, and other criteria.

The Obvious: In game seven on Oct. 14, the Trojans continue their two-game home stand, hosting a huge Pac-12 South Division game against the Utah Utes.

The Not So Obvious: The Utes finished with their spring game on April 15. The Red team beat the White team, 20-10, in a 90-minute scrimmage at Rice Eccles Stadium. Senior quarterback Troy Williams and sophomore Tyler Huntley, who played only in the first half, completed a combined 17 of 27 attempts for 138 yards. Neither QB had a touchdown pass, but Huntley did throw an interception. Sophomore tailback Devonta’e Henry-Cole had 44 yards rushing on 15 carries, 23 yards receiving, and two rushing touchdowns. By coaching decision, the Utes were without 22 players due to injuries and not wanting to risk injury to other players.

The Obvious: In game eight, the Cardinal and Gold travel back to South Bend for their Oct. 21 donnybrook with Notre Dame.

The Not So Obvious: The Irish held their spring game in renovated Notre Dame Stadium on April 22. The Gold defeated the Blue, 27-14, in the Annual Blue-Gold Game. Backup sophomore quarterback Ian Book threw for 277 yards (17 of 22) and one touchdown. Defensively, sophomore defensive end Daelin Hayes, a former Trojans verbal, had seven tackles with three sacks for the winning team in front of the 20,147. Junior running back Dexter Williams (Gold) led all players with 132 all-purpose yards, including 96 rushing yards and 36 receiving yards.

The Obvious: In game nine, USC continues on the road with another Pac-12 South showdown at Arizona State on Oct. 28.

The Not So Obvious: The Sun Devils completed spring ball on April 15 with their spring game inside Sun Devil Stadium. A disappointing 4,600 fans were in attendance, as ASU made their spring game more a no-tackling practice. Afterward, head coach Todd Graham said, “I think we did a lot of good things defensively and a lot of good things on offense. (There were) a lot of explosive plays. I was very impressed with (wide receiver) John (Humprey). Blake (Barnett), Manny (Wilkins) both had some incredible throws, but John’s impressive. Our receivers have been impressive as have our running backs. I think Nick Ralston, Kalen Ballage, and Demario Richard have been excellent.”

The Obvious: In game ten, the Trojans return to the Coliseum for a Pac-12 South battle with Arizona on Nov. 4.

The Not So Obvious: The Arizona football “Spring Showcase” was played on Friday night, March 31, as the Wildcats hosted an early evening, open scrimmage at Arizona Stadium. Calling the spring game a practice, head coach Rich Rodriguez appraised his sophomore quarterback Khalil Tate’s impressive final “practice” performance. Rich Rod said, “It helped him (Tate). He’d had a pretty solid spring. But that was the best he had played. I don’t necessarily believe in guys that are ‘gamers’ and then turn it on when the lights are on. You’ve got to do it every day. He’s a very talented guy that it’s important to. He’ll keep getting better.” On a problematic side, Rodriguez said his most concerning area entering summer is the offensive line and its depth.

The Obvious: In game eleven on Nov. 11, the Trojans return to the road for a major Pac-12 South Division match with defending division champion Colorado.

The Not So Obvious: The Buffaloes spring game was held on March 18, and 6,250 watched the proceedings. The Buffs spring game consisted of an hour of drills before finishing with an additional hour of situational scrimmaging. The limited scrimmage got off to a shaky start when sophomore quarterback Steven Montez, who is expected to be the 2017 starter, got picked off by junior defensive back Nick Fisher on his first pass from scrimmage. It wasn’t until his third drive that Montez finally found his groove. Montez led an impressive 14-play, 55-yard drive, finishing it off with a 1-yard quarterback keeper.

The Obvious: The regular season ends on Nov. 18, as the Men of Troy welcome UCLA to the Coliseum in the annual crosstown showdown and Pac-12 South Division tussle.

The Not So Obvious: In UCLA’s spring game on April 29, the White team used a 10-point fourth quarter to capture a 17-10 win, as the Bruins wrapped up spring football with the annual “Showcase Event” on Saturday afternoon in Drake Stadium on campus. Junior running back Bolu Olorunfunmi broke loose on a 46-yard scoring run with 1:37 to play in the fourth quarter to cap off a rally by the White team. UCLA junior quarterback Josh Rosen completed 14 of 18 passes on the day for 83 yards and a touchdown.

The Obvious: And finally, it’s hard to judge what any of these spring games actually means, since so many of the teams use different formats, and rosters can be diluted due to injuries and rehabilitations.

The Not So Obvious: However, it’s not really about the spring games as much as what was learned during the weekly spring practice sessions that test technique, fundamentals, and improvement. However, what can be said about spring games in this day and age is that they are a fun way of getting the masses together for a rewarding day at the stadium.