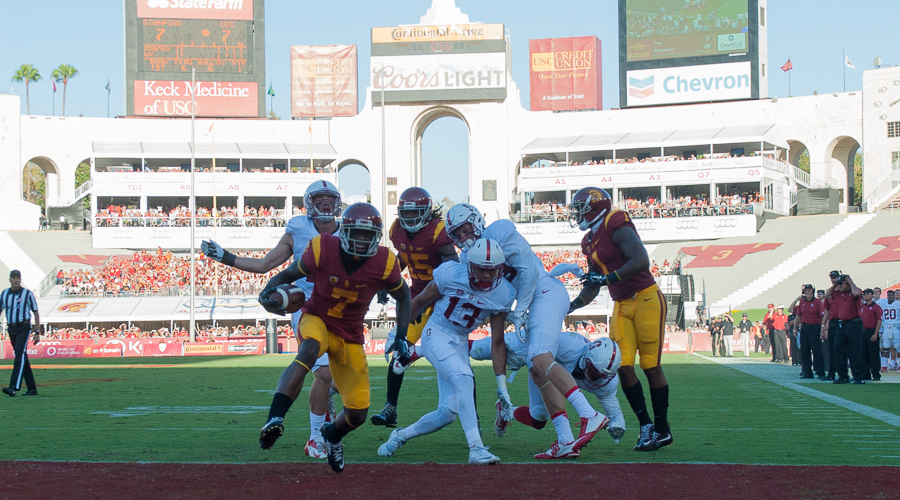 The Not So Obvious: This will be a rematch from the two teams previous meeting on Sept 19 in the Los Angeles Memorial Coliseum, which was won by the Cardinal 41- 31. However, experience could play a factor in Saturday’s championship game, as a number of Stanford players have already played in two Pac-12 Conference championship games (2012 & 2013).

The Obvious: Stanford opened a 4 ½ -point favorite to defeat the Trojans

The Not So Obvious: With Saturday night’s game being a rematch, this will be the 14th time that the Trojans have played the same team twice in the same year (the first since 1987). The last six games in the series have been decided by 10 points or less.

The Not So Obvious: The Pac-12 Championship Game broadcasters for Saturday’s kickoff against Stanford will be Brad Nessler (play-by-play), Todd Blackledge (analysis), and Holly Rowe (sidelines).

The Obvious: Saturday’s Trojans radio broadcast of the Pac-12 Championship will air live on ESPNLA 710 AM at 4:45 p.m. PT with Pete Arbogast (play by play), John Jackson (analyst) and Jordan Moore (sideline).

The Trojans four-hour ESPNLA 710 pregame show on Saturday begins at 12:45 p.m. PT and will feature Arbogast, Jackson, Moore, WeAreSC.com publisher Garry Paskwietz, Steve Mason, Harvey Hyde, Katie Boggs, and Shaun Cody. There will be a two-hour post-game show following the conclusion of the game with Chris Fisher and Shaun Cody.

The Not So Obvious: The Stanford broadcast can be heard on flagship station KTRB 860 AM with Scott Reiss (play-by-play), Todd Husak (analyst), and John Platz. (sidelines).

The Obvious: The Santa Clara weather report for Saturday calls for mostly cloudy with a high of 63 and a low of 46 degrees.

The Not So Obvious: The real weather report will be whether the Trojans are ready to give Stanford all they can handle from a physical point of view and whether the Men of Troy aren’t going to suffer from a letdown after the big UCLA win last weekend. Since Clay Helton’s team has already faced Stanford, so we’ll soon find out whether they learned the secret to beating the Cardinal this time around.

Offensively, the Trojans will need to play the same type of ball control that Stanford will attempt to do against them. With All-Pac-12 offensive right tackle Zach Banner leads the Trojans ground assault, and junior tailback Justin Davis is really starting to flash some Trojans tailback legacy endurance, so we’ll find out whether the Trojans will be able to impose their will on the ground. Then there’s senior quarterback Cody Kessler, whose passing role has been reduced, but his quality passes have remained constant. Whether Kessler can match the passing production of Stanford QB Kevin Hogan will be critical. The Cardinal secondary has been vulnerable, and Trojans fans will be waiting to see whether sophomore All-Pac-12 receiver JuJu Smith-Schuster is double-teamed by the Cardinal defense and whether the Trojans adjust by throwing more to wide receiver Steven Mitchell Jr. (above photo) and their tight ends. Whether the Trojans can neutralize former Trojans D-line recruit and current Stanford All-Pac-12 DT Aziz Shittu and All-Pac-12 linebacker Blake Martinez will be vital for the Trojans to move the ball on the ground.

Defensively, the Trojans know what is coming with the Stanford offense – a physical challenge. We’ll see whether there has been improvement by the Trojans front seven from the last time these two clubs played. Stanford is sure to test the Trojans newly aggressive defensive front by unleashing All-Pac-12 offensive linemen like guard Josh Garnett and tackle Kyle Murphy. Of course, the Trojans will have to stop the Pac-12 Offensive Player of the Year, sophomore running back Christian McCaffrey, and veteran QB and second team All-Pac-12 selection Kevin Hogan. Whether the Trojans can stay patient and contend with this two-headed monster will be critical to the outcome. If Hogan plays his game through the air and is allowed to get out of the pocket and run up field, the Trojans will be in trouble. And beware of Stanford’s tall All-Pac-12 tight end Austin Hooper Jr., who can be a real mismatch for the Trojans secondary – as learned the last time these two teams played – along with big wide receivers like Devon Cajuste and Michael Rector. This is the type of game that should showcase the Trojans two-time All-Pac-12 linebacker Su’a Cravens, All-Pac-12 defensive lineman Antwaun Woods, and All-Pac-12 defensive back Adoree’ Jackson, all of whom will need to be at their best. Add second-team All-Pac-12 defensive tackle Delvon Simmons, and it should be a war from sideline to sideline.

Perhaps the biggest key, however, is whether the Trojans can upset the favored Cardinal through special teams. It figures that Trojans placekicker Alex Wood is ready to go and is now experienced enough to get the job done. And, of course, there is the incomparable Adoree’ Jackson on kickoff and punt returns. Whether the Cardinal allow Jackson to return kickoff and punts will be interesting. The Trojans could also have their hands full with Christian McCaffrey the Stanford counterpart to Adoree’. However, placekicking could decide the game, so whether the Trojans can limit the field goal attempts by Stanford standout Conrad Ukropina, who upset Notre Dame last week with a game-winning field goal as time was running out, remains to be seen. Ukropina is definitely a major weapon for the Cardinal.

Lastly, there is the experience of the two head coaches in a Pac-12 Championship Game. Stanford’s David Shaw has coached in two of these high-pressured games, and Trojans head coach Clay Helton has no such experience. We’ll see whether Helton is ready to match wits with Shaw, especially in the second half during crunch time.

The Not So Obvious: Regarding the Pac-12 Championship Game against Stanford, “He (Kevin Hogan) is a big key to stopping a very talented Stanford offense. We have to do a great job on first and second down to create some longer third down situations than we had in the first game. We need to really try to get to this quarterback in passing situations. We have put heavy emphasis on our own third down situations; I thought we can do even better than we did in this first game. It’s going to be critical to keep the ball away from this high-powered Stanford offense.”

The Not So Obvious: Regarding the Trojans hiring of Clay Helton and a return to the running game, Shaw says, “I think it’s well deserved (the hiring). He’s very well respected in coaching circles. Stability is always good for the coaching profession. (It made) a lot of sense to recommit to the running game.”

Regarding the Trojans tailback tandem of Justin Davis and Ronald Jones ll, Shaw said, “(Davis) has size, quickness and vision and the young cat (Jones) is just explosive. It’s a great one-two punch.”

The Obvious: Through 12 games, the Trojans offense is averaging 36.0 points per game while the Stanford defense is allowing 23.2 points per outing.

The Obvious: The Trojans quarterback is fifth-year senior Cody Kessler,

The Not So Obvious: In the September game against Stanford, Kessler was 25 of 32 for 272 yards and three touchdowns with wide receiver Steven Mitchell Jr. catching two touchdown passes and JuJu Smith-Schuster catching the other.

The Obvious: USC and Stanford are both private institutions.

The Obvious: The Trojans traditionally have recruited well in Northern California.

The Obvious: In the 13th game of the season, the Trojans are playing in the month of December.

The Obvious: And finally, a major key to the game will be the Trojans ability run the ball on a tough, interior Stanford defense.

The Not So Obvious: In the Trojans seven games this year under Clay Helton (including wins over a pair of Top 25 teams), the Trojans have outrushed opponents in each game (by an average of 263 to 124 yards) and been +9 in turnovers (14 to 5).