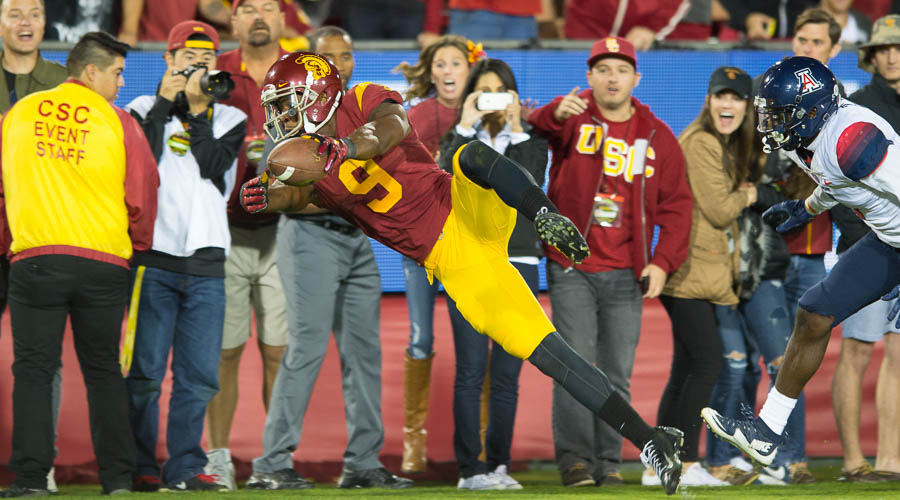 The Not So Obvious: Unless the Trojans finish the regular season in a Pac-12 South Division tie with Utah that would give them the tie-breaker, the Trojans need to sweep their final two games against Oregon and UCLA to undeniably assure themselves the division title to advance to the Pac-12 Championship Game on Dec. 5 in Levi’s Stadium in Santa Clara. As for the Ducks, who upset Pac-12 North Division leader Stanford last weekend, 37-36, in Palo Alto, they must beat the Trojans and hope Stanford losses to Cal on Saturday in the Big Game in Stanford Stadium.

The Obvious: Oregon opened a 3 ½ -point favorite to defeat the Trojans.

The Not So Obvious: This is the 10th straight USC-Oregon game that both teams are ranked. The Trojans hold a 37-19-2 record in its series with Oregon, dating to 1915. The Trojans have lost three of the past four games, four of the last six, and nine of the past 14 contests. Both teams carry a four-game win streak into Saturday’s game.

The Not So Obvious: The ESPN broadcasters for Saturday’s kickoff against Oregon will be Dave Pasch (play-by-play), Brian Griese (analysis), and Tom Luginbill (sidelines).

The Obvious: Saturday’s Trojans radio broadcast of the Oregon game will air live on ESPNLA 710 AM at 12:30 p.m. with Pete Arbogast (play by play), John Jackson (analyst) and Jordan Moore (sideline).

The Trojans four-hour ESPNLA 710 pregame show on Saturday begins at 8:30 a.m. PT and will feature Arbogast, Jackson, Moore, WeAreSC.com publisher Garry Paskwietz (9:35am), Steve Mason, Harvey Hyde, Katie Boggs, and Shaun Cody. There will be a two-hour post-game show following the conclusion of the game with Chris Fisher and Shaun Cody.

The Not So Obvious: The Oregon broadcast can be heard on flagship station KUGN 590 AM with Jerry Allen (play-by-play) and Mike Jorgensen (analyst).

The Obvious: Through 10 games, the Trojans offense is averaging 36.4 points per game while the Oregon defense is allowing 37.1 points per outing.

The Obvious: The Oregon weather report for Saturday in Eugene calls for sunny with a high of 45 and a low of 31 degrees.

The Not So Obvious: The real weather report will be whether the Trojans defense can adjust to a Ducks offensive scheme that they haven’t seen since 2012. With both Trojans inside linebackers Cameron Smith and backup Lamar Dawson lost for the season, you can expect the Trojans to turn to a number of candidates, but the first one up appears to be sophomore Olajuwon Tucker. It’s not a question whether Oregon attacks the linebacking area lost to a surgeon’s knife, but how often and how effective. With new and inexperience linebackers, watch out for a lot of misdirection and read option plays by Oregon. In sophomore Royce Freeman, the Ducks have one of the best backs in the country, and Freeman will be tough to stop from breaking long-gone runs. Freeman’s backups, Kani Benoit and Taj Griffin, are more than capable of inflicting rushing pain on the Trojans.

Oregon’s high-powered attack is led by elusive and athletic quarterback Vernon Adams Jr., and we’ll find out whether the Trojans defensive up front can contain Adams from improvising when a play breaks down. If the Trojans can’t do it, the Men of Troy could be in for a long afternoon. The Trojans secondary will be skating a tightrope, having to come up on runs and still not be sucked in on play-action passes. Both Trojans corners, Adoree’ Jackson and Iman Marshall, figure to get severely tested, as will the safeties. Oregon receivers Braylon Addison, Darren Carrington, Devon Allen, and two-way star Charles Nelson can go the distance at any time.

Offensively, the Trojans will need to score and score and score, and the O/NSO doesn’t mean field goals. Quarterback Cody Kessler will have play error-free football as will the rest of his offensive teammates like running backs Justin Davis and Robert Jones ll. JuJu Smith-Schuster (above photo), who was named this week one of the 10 semifinalists for the 2015 Biletnikoff Award given annually to the top wide receiver in college football, will probably be double covered, and Kessler will have to make adjustments to other receivers like Darreus Rogers, Steven Mitchell Jr., and his tight ends. Oregon has the Pac-12’s worst pass defense (318 yds. per game), so advantage Trojans.

And lets now forget whether the Trojans battered offensive line, which will feature inexperienced redshirt freshman right guard Chris Brown filling in for injured sophomore Viane Talamaivao (knee) who may see limited action. It remains to be seen whether the Trojans offense can mount long drives, score touchdowns, and generally keep the Ducks explosive offense off the field. Most games are won in the battle of turnovers, and this game will be no exception. The Trojans running game should be able to move the ball against the Oregon defense, which can be vulnerable, although they have a stud in big defensive end DeForest Buckner.

In terms of special teams, both clubs have explosive performers. The Trojans Adoree’ Jackson and the Ducks Charles Nelson are two of the best anywhere. As for placekicking, we find out whether the Trojans Alex Wood can match legs with the Ducks Aiden Schneider, who has some impressive conference and national statistics.

The Not So Obvious: Regarding the Ducks, Helton says, “This is going to be about points. I think it always is against Oregon. You can’t have a bunch of three-and-outs; you can’t get stopped in the red zone because they’re going to put some points on the board. A lot of pressure is going to be on our offense this week to be able to match and our defense to be able to create stops and create turnovers.”

The Obvious: The head coach of Oregon is Mark Helfrich, who is in his third season with the Ducks after taking over for Chip Kelly, now the head coach for the Philadelphia Eagles.

The Not So Obvious: Regarding the Trojans, Helfrich says, “The Trojans are an exceptional threat. You turn on the tape and quickly get slapped in the face with how good USC is. Our guys will be excited about that challenge.”

The Obvious: The Trojans scored one of their most memorable upsets of the series in 2011 when the No. 18 Men of Troy surprised the No. 4 Ducks 38-35.

The Obvious: The Trojans have one of the electrifying all-purpose performers in CB/WR/ST sophomore Adoree’ Jackson.

The Not So Obvious: The Ducks also have their own explosive special team options. Oregon ranks in the national Top 15 in kickoff returns and punt returns, thanks to elusive WR/S Charles Nelson, who along with Braylon Addison have combined for five career scoring punt returns.

The Not So Obvious: A transfer from Eastern Washington, Adams as thrown a touchdown in 33 straight games (the first 26 at Eastern Washington), has 12,000-plus career passing yards, and a combined 126 TDs at both schools.

The Obvious: Saturday’s game between the Trojans and Ducks might come down to how many points each placekicker can convert.

The Obvious: The Trojans defense will be hurting with the loss of true freshman standout inside linebacker Cameron Smith (ACL) and senior Lamar Dawson (shoulder), both out for the balance of the season.

The Not So Obvious: The Oregon defense is led on defense by senior inside linebackers Joe Walker and Rodney Hardrick, senior superstar defensive end DeForest Buckner, and sophomore corner Tyree Robinson, who was once a Trojans recruiting target.

The Obvious: The Trojans currently have no players from the state of Oregon.

The Not So Obvious: Oregon has 38 players from California

The Obvious: The Trojans have played almost all their football games in the United States.

The Not So Obvious: The only football game that the Trojans have played outside of the United States occurred 30 years ago in 1985 against Oregon in the regular season finale Mirage Bowl in Tokyo, Japan. The Trojans won, 20-6, and from that team is current radio analyst John Jackson, who was a wide receiver.

The Obvious: Trojans Hall of Fame and legendary football coach John McKay was once a halfback at the University of Oregon.

The Not So Obvious: Sirmon was a four-year (1996-99) starting linebacker at Oregon and then was a graduate assistant coach with the Ducks in 2009. Nothing like all in the family.