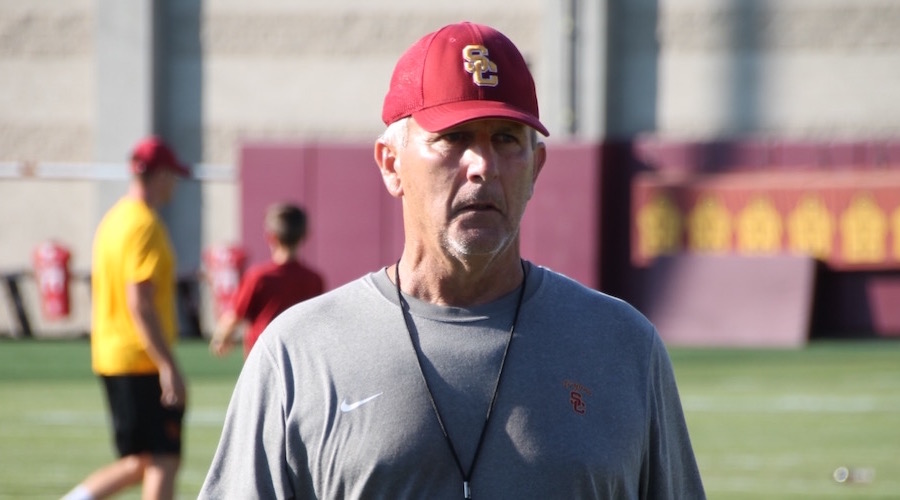 The Obvious: As Clay Helton’s football team continues to prepare for the No. 1 Alabama Crimson Tide, competition on Howard Jones/Brian Kennedy Fields also continues for a limited amount of starting positions that were unsolidified after last Sunday’s depth chart release.

The Not So Obvious: There are still enough “OR” spots open for starting positions to have made things interesting this week leading up to the Sept. 3 season opener in Arlington Texas and AT&T Stadium. Among other O/NSO items, here’s a look at some of those listed as “OR” as the Trojans prepare of a closed to everybody (media and public) mock game on Saturday.

The Obvious: Junior Damien Mama and sophomore Chris Brown are listed as co-starters at left guard.

The Not So Obvious: When the offensive line depth chart was released, the public got to see the analysis and up-to-date evaluation from first-year offensive line coach Neil Callaway (photo above). The anticipation at left guard between Brown and Mama has continued this week with most observers believing that when it’s all said and done that Brown will be the starter against Alabama.

The Obvious: Although training camp observers were not totally surprised, a true freshman offensive tackle (E.J. Price) is listed as right behind senior starter Chad Wheeler.

The Not So Obvious: It figures that if Wheeler can’t go against Alabama because of his foot issue, his replacement will not be the inexperienced Price in spite of what the depth chart says. Either senior All-Pac-12 tackle Zach Banner or sophomore Chuma Edoga figures to fill Wheeler’s spot if Chad can’t go. Although Price isn’t really expected to replace Wheeler, it does show how quickly E.J. has made a positive impression on Callaway. It’s possible, however, that Price will see some action against the Crimson Tide.

The Obvious: Todd McShay is one of ESPN’s draft gurus, and he is already chiming in on the 2017 NFL draft.

The Not So Obvious: McShay says that Alabama’s Cam Robinson is the nation’s top offensive lineman for the 2017 NFL draft and lists Trojans senior tackle Chad Wheeler as his No. 9 O-lineman. Yes, you’re right, no Zach Banner in McShay’s Top 10, which also included underclassmen.

The Not So Obvious: Burnett certainly made the most of his opportunities in training camp and made play after play. Not that Mitchell was a disappointment because he wasn’t. It’s just that Burnett’s play was so outstanding that wide receivers coach Tee Martin had little choice but to do the right thing and list both explosive players as co-starters. Burnett is expected to be part of a four wideout formation.

The Obvious: Senior Michael Hutchings has earned the starting spot at inside linebacker next to sophomore Cameron Smith.

The Not So Obvious: What a great way for Hutchings to start his senior season, being in the opening lineup against the defending national champion Crimson Tide in AT&T Stadium, home of the Dallas Cowboys. Talk to Michael and he is very eager to compete. He’ll tell you it’s just another game, but he does acknowledge the challenge of the SEC powerhouse.

The Not So Obvious: Nobody on the defense seems to have benefited more with arrival or should we say return of defensive coordinator Clancy Pendergast than McQuay. No question that McQuay’s reborn confidence is knowing that Pendergast has confidence in him. Clancy’s return has given new opportunity to McQuay and the Trojans hope it all translates into a big senior season for the native Floridian.

The Not So Obvious: Well, this competition continues and it’s a question of strong leg versus directional consistency. Tilbey has the leg of a howitzer cannon while Budrovic’s punts are like on a GPS system. Like quarterbacks Max Browne and Sam Darnold, Tilbey and Budrovic bring a different option to the table.

The Obvious: Although junior Max Browne has earned the starting quarterback position over redshirt freshman Sam Darnold, there is mild debate over the selection of Browne to start against Alabama.

The Not So Obvious: There are always hypothetical questions that could be asked regarding Clay Helton’s quarterback decision. One of those hypothetical questions out there is “if Max Browne and Sam Darnold were in the same academic and/or athletic eligibility grade, would Browne have still been selected over Darnold?

The Obvious: The Alabama defense is being projected as one of the fastest and most talented group in quite some time.

The Not So Obvious: Some are saying that the weakness of Alabama’s defense is a young secondary. Well, you might want to also consider that some with intimate knowledge of the Tide’s secondary believe that it is extremely gifted and is far from having any Swiss cheese holes. Some believe that this may be Nick Saban’s fastest and most talented defense of his Alabama tenure.

The Obvious: Every home season, the Trojans Marching Band holds selected tailgaters to raise money for its program.

The Not So Obvious: The Trojans Marching Band is again offering their own public all-you-can-eat tailgate parties for three separate home games (Oct. 1/ASU, Oct. 8/Colorado, Nov. 26/Notre Dame). Taking place on the USC campus and Hancock Park South Lawn, the menu will be varied, but the Notre Dame tailgater on campus will feature “Bosko’s BBQ.” Special game day entrees include fruit, salad, desserts, and sodas, beer, wine and full bar. The tailgate will start five hours prior to kickoff and the kitchen closes 90 minutes prior to kickoff. Cost is $40 for adults, $15 for students, and children 10 and under free. There will be separate pricing for Bosko’s BBQ. The Notre Dame tailgater will move to North Exposition Park (West Lawn). For more info, call 562-577-4737.

The Obvious: Every season, strength of schedule becomes a major point when the College Football Playoff committee meets to rank its teams.

The Not So Obvious: The Trojans are one of three NCAA FBS (formerly Division 1-A) schools that has never played an FCS (formerly non-Division 1-A) opponent since the divisions were established in 1978. BTW, the other schools are annual opponents UCLA and Notre Dame.

The Obvious: Last season, the Trojans drew media criticism for hosting pedestrian Arkansas State and Idaho, which didn’t exactly give experts an early chance to properly evaluate the Men of Troy.

The Not So Obvious: Perhaps learning a lesson regarding the Trojans brutal 2016 schedule, the Oregon Ducks have added San Jose State and Portland State to its 2018 schedule. Perhaps also seeing the potential damage of a tough non-conference schedule, Utah will host Southern Utah in 2022.

The Not So Obvious: Perhaps at first aided by injury to some of the younger competition, it can be safely said that grad student Stevie “Mr.T” Tu’ikolovatu has more than earned his spot as the Trojans nose tackle in DC Clancy Pendergast’s 5-2 defense. Yes, he has been that good against the veteran Trojans offensive line and last Sunday’s announcement only make it official.

The Obvious: Junior placekicker Matt Boermeester has earned the placekicker position for 2016.

The Not So Obvious: Boermeester’s powerful left leg was on display during the critical training camp scrimmages, and it played a big part in solidifying the starter spot. Now all Matt has to do is prove to special teams coach John Baxter that he is worthy of the appointment. All Matt has left is to show he is the man against No. 1 Alabama on national television. Is that too much to ask?

The Obvious: Ultra-talented true freshman Jack Jones from Long Beach Poly High was expected to be in the mix for a number of positions.

The Not So Obvious: Jack is certainly showing that promise as he is already listed as an the third option behind Adoree’ Jackson and Steven Mitchell Jr. on kickoff returns and is Adoree’s backup on punt returns. Now, did Jack really say he should be a Heisman Trophy candidate?

The Obvious: And finally, no question the Trojans are deep at the tailback position.

The Not So Obvious: And to show you the type of depth the Men of Troy have at the running backs spot, after the pecking order of Justin Davis, Ronald Jones ll, and Aca’Cedric Ware, former walk-on and now scholarship ball carrier James Toland lV is listed equal along with sophomore Dominic Davis, which is no slight to Dominic’s performance. Toland could be starting at a number of schools.