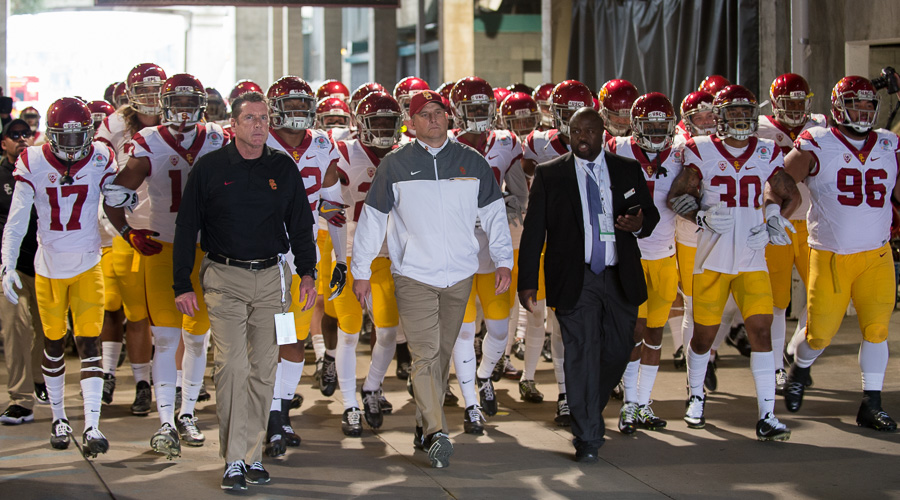 The Obvious: The USC Trojans have released their 2017 football schedule.

The Not So Obvious: The first thing one notices is that the Trojans are home three of the first 5 games, which should provide for a good transition for new inexperienced talent and mold cohesiveness. However, those first trio of games (Western Michigan, Stanford, Texas) should be challenging even with WMU and Texas having new head coaches. The real challenge for the Trojans early-on is that Pac-12 opener with Stanford on Sept. 9 in the Coliseum. The Cardinal game will be the seventh year in a row that the Trojans have opened Pac-12 play with Stanford.

The Obvious: The 2017 schedule positive news is that the Trojans will not play a Thursday night game, either home or away.

The Not So Obvious: The negative 2017 schedule news is that the Men of Troy will have a Friday night game at Washington State on Saturday, Sept 29, which will have the return of standout quarterback Luke Falk. On the plus side, it figures the weather in late September will be manageable.

The Obvious: The Trojans finish their 2017 season with three of their last five games played on the road.

The Obvious: The Trojans will not have a bye week in 2017.

The Not So Obvious: Of all the Pac-12 teams, the Trojans are the only team in the conference that ends it regular season earlier (Nov. 18) than everybody else.

The Obvious: The 2017 Pac-12 will be judged in part by the results of its non-conference schedule.

The Not So Obvious: Pac-12 non-conference games that will draw attention either by their rankings or by location include Houston at Arizona, Arizona State at Texas Tech, Ole Miss at California, Colorado vs. Colorado State, Nebraska at Oregon, Minnesota at Oregon State, Notre Dame at Stanford, Texas A&M at UCLA, Utah at BYU, Washington at Rutgers, Boise State at Washington State, and, of course, the Trojans hosting Texas and traveling to Notre Dame.

The Obvious: The Trojans 2017 schedule features five opponents that played in bowl games this past season and won at least eight games.

The Not So Obvious: The Trojans will not play Oregon and Washington during the regular season, which should be considered a plus in the overall picture.

The Obvious: Earlier this week, Trojans consensus junior All-American corner and all-purpose performer Adoree’ Jackson announced that he is entering the 2017 NFL draft.

The Not So Obvious: Disappointing? Sure. Shocker? Absolutely not. When A.J. was injured in the Rose Bowl against Penn State, it was a reminder to him and his family that you’re always one play away from finding a new career. Take the money and run? In this case, as for many others, it just made financial sense to head to the NFL, and the O/NSO wishes Adoree’ all the success in the world.

The Obvious: With the departure of Adoree’ Jackson, the Trojans arguably lost their most explosive player for the 2017 season.

The Not So Obvious: No question the Trojans will need to find some sort of Jackson replacement…if one exists. The 2017 Cardinal and Gold could become a team of players that all up their game during spring ball and provide some sort of A.J. compensation. Look for either wide receiver Deontay Burnett or corner Jack Jones to get the first-look during spring ball to handle punt returns and/or kick-off returns. Another possibility could be Steven Mitchell, a dynamic player when healthy, who is recovering from knee surgery.

The Obvious: With the departure of Adoree’ Jackson, the Trojans will look to fill his corner spot.

The Not So Obvious: On the outset of spring ball, it is expected that freshman Jack Jones will first up to replace Jackson. Other candidates figure to be Ajene Harris, Isaiah Langley and intriguing freshman Keyshawn “Pie” Young. And don’t count out rehabilitating corner Jonathan Lockett.

The Obvious: The early departure of Adoree’ Jackson could have an effect on this season’s recruiting class.

The Not So Obvious: It will be interesting now to see how the recruiting chips fall now that the Jackson decision to the NFL has become official.

The Obvious: Former Trojans running back coach Kennedy Polamalu has accepted a position as running backs coach for the Minnesota Vikings.

The Not So Obvious: Having been jettisoned by UCLA as its offensive coordinator and running backs coach, Polamalu, the beloved former Trojan player and assistant coach, returns to the NFL. Polamalu has coached at the NFL level before, coaching running backs in Cleveland (2004) and in Jacksonville (2005-09).

The Obvious: There are a number of former Trojans now playing with the Minnesota Vikings.

The Not So Obvious: At Minnesota, Kennedy Polamalu will be reunited with former Trojans TE Rhett Ellison, DE Everson Griffen, and OT Matt Kalil.

The Not So Obvious: McKenzie is the son of Oakland Raiders GM Reggie McKenzie, an ex-NFL linebacker. Jalen’s uncle, Raleigh, is a former NFL offensive lineman. Jalen, who said he had offers from Baylor, Maryland, and ASU, announced that he has been a Trojan fan since the days of Pete Carroll and knew he was going to be a Trojan when his plane landed in Los Angeles for his recruiting visit. In a media interview, McKenzie said there are some big announcements to come, but he wouldn’t reveal who they were.

The Obvious: The Trojans are recruiting Georgia defensive tackle Aubrey Soloman who made an official visit to USC last weekend.

The Not So Obvious: According to ESPN, “Michigan coach Jim Harbaugh has been known to get creative on in-home visits with recruits. He has had sleep overs, climbed trees and now you can add riding go-karts to the list. Harbaugh, defensive coordinator Don Brown and linebackers coach Chris Partridge all traveled down to Leesburg, Georgia (this week) to conduct an in-home visit with ESPN 300 defensive tackle Aubrey Solomon. The coaches and prospect drove go-karts, went bowling and made arts and crafts for Solomon’s younger sister on the visit.”

The Obvious: And finally, there is always discussion after the 2016 season which conference was the strongest.

The Not So Obvious: Only the Pac-12 finished 2016 with two teams (USC and Washington) in the final top five of the AP poll.