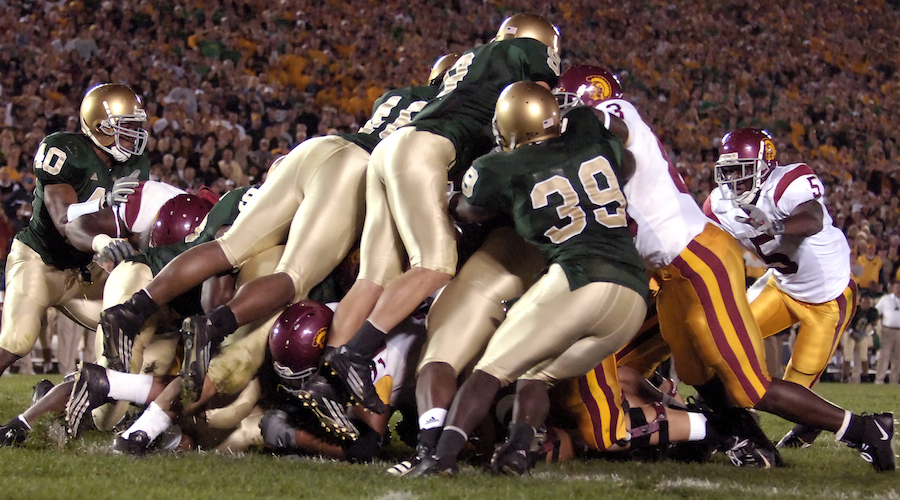 The Obvious: Simply put, Saturday evening’s No. 11 USC Trojans (6-1, 4-1 Pac-12) at No. 13 Notre Dame (5-1) football game in Notre Dame Stadium (4:30 p.m. PT/7:30 p.m. ET) is a College Football Playoff elimination round. The winner keeps it hopes alive for a national championship and for the loser, it’s wait till next year. Oh, and by the way, this will be the 89th edition of college football’s greatest intersectional rivalry.

The Not So Obvious: As far as the Trojans and the CFP, this is it for Clay Helton’s cardinal and gold. In playing the Irish, Troy will be tested severely against a Notre Dame team that has lost just one game, a narrow 20-19 defeat to No. 2 Georgia. If the Trojans come out and play like they have for most of the season, it doesn’t bode well. If the Trojans play their best game of 2017, they’ll still be in the hunt for a possible CFP semi-final selection. With all that’s at stake for both teams, Notre Dame Stadium figures to be one maniacal venue.

The Obvious: The Trojans opened a 4-point underdog to the Irish.

The Not So Obvious: The Men of Troy have won 11 of the past 15 meetings with the Irish, but 4 of those losses have been since 2010. The Trojans have won 6 of the past 10 games in Notre Dame Stadium, but have lost the last two times in South Bend, which includes 2015, which was just six days after Clay Helton was named as USC’s interim head coach.

The Not So Obvious: The NBC broadcasters for Saturday night’s game will be Mike Tirico (play-by-play), Doug Flutie(analysis), and Kathryn Tappen (sidelines).

The Not So Obvious: The Notre Dame broadcast can be heard on flagship station WSBT(960AM) with Don Criqui (play-by-play) and Allen Pinkett (analyst).

The Obvious: Saturday’s South Bend weather forecast calls for partly cloudy with a high of 73 degrees, a low of 60 degrees, 57 percent humidity, and 10 precipitation.

The Not So Obvious: The real weather report is whether the Trojans are ready for a Notre Dame Stadium that will be rocking and rolling on Saturday night. We’ll see whether Trojans’ quarterback Sam Darnold, receivers, and offensive line are ready to execute in what will be the most hostile environment the Men of Troy will face on the road all season. Look for Trojans’ running back Ronald Jones ll to be a potential equalizer for a tough Irish defensive… if RoJo is given a hole. The ND defense ranks 15th nationally in scoring defense and allows just 16 points per game. Defensively, we’ll see whether the Trojans’ defense can play the best game of the season in order to handle a very physical Irish running attack. Expect ND to come out strong early to put the Men of Troy away early. In running back Josh Adams (6-2, 228), Troy will be facing a future NFL rusher with size, power, and speed. While Adams is exceptional, the Irish offense revolves around the talents of sophomore dual-threat quarterback Brandon Wimbush (6-2, 228), who is also big, strong, fast, and shifty. Like Adams, Wimbush has the ability to take it to the house on any play from anywhere on the field and he is an adequate passer. Wimbush reminds the O/NSO of standout quarterbacks from the Lou Holtz era… We’ll also see whether Notre Dame’s preseason All-America offensive linemen, tackle Mike McGlinchey (6-8, 315) and guard Quenton Nelson (6-5, 330), can be neutralized by the smaller Trojans D-line, especially one that is now lacking in depth due to the loss of DL Kenny Bigelow (recently retired) and the loss of senior starting nose tackle Josh Fatu (concussion protocol). Two of those starting Trojan linemen who will try to maintain order are sophomore defensive end Christian Rector, who was recently named to the mid-season AP All-America second team, and junior DL Rasheem Green, who has also had a superior season but is also nursing an ankle issue. We’ll see whether newcomers and backups can offset the recent DL developments. Given its inconsistent play, the Trojans’ secondary is sure to be tested, especially by West Coast native ND receivers like WR Equanimeous St. Brown (older brother of USC recruit Amon-Ra St. Brown) and TE Alize Mack. We’ll find out whether the Trojans have the better placekicker in walk-on true freshman Chase McGrath, who defeated Texas with an OT FG, or Notre Dame’s Justin Yoon, a junior, who had a four-for-four FG performance against Georgia this season and has a career long of 52 yards.

The Obvious: The 2017 Trojans’ offense averages 34.4 points per game while the Notre Dame defense is allowing 16.8 points per outing.

The Obvious: Notre Dame head coach Brian Kelly returns for his 8th season as the head coach of the Fighting Irish.

The Not So Obvious: Assessing the Trojans, Kelly says, “I think everybody nationally knows about Sam Darnold and what he can do, Heisman trophy candidate. Great supporting cast: Ronald Jones, Deonte (Burnett). Very, very capable in many areas; the ability to throw it. They are going to be a challenge as it relates to their passing game, and they are very good at running the football, as well. Defensively, Clancy Pendergast is an experience the defensive coordinator. He’s done a great job. I think if you look at their defensive front, it’s probably more than anything else, been one where they have gotten a lot more disruptions; the ability to pressure the quarterback. (Rasheem) Green has done a nice job this year. Fatu (questionable with concussion protocol) is physical at the nose, has been extremely disruptive. I think my favorite player on the defense is Cameron Smith. He’s all over the field. He’s smart. Great tackler in space. The ability to do a lot of things in coverage, but plays well in the box. Back end of the defense is as good as we’ve seen. I think Marvell Tell is going to be a great guy on Sundays.”

The Not So Obvious: Helton says, “A USC vs Notre Dame game in South Bend is a bucket list item for many people. It’s why you come to these schools, it’s why you play the game. Somebody asked me the other day, ‘what’s it mean to you to be able to be a part of this?’ I mean, this is what dreams are made of. You grow up hoping to be at USC, and getting to play Notre Dame, and just being a part of that is special. You know, this has been a game that’s been played over 90 years. It’s 22 national championships, it’s just a legacy, it’s a tradition. You’re making history when you win this game.”

The Obvious: The Notre Dame quarterback is sophomore Brandon Wimbush.

The Not So Obvious: Wimbush, a native of Teaneck, New Jersey, and St. Peter’s Prep, was the New Jersey Gatorade Player of the year in 2014.

The Obvious: There has been great controversy over the continuing Coliseum renovation.

The Not So Obvious: Saturday’s game will mark the first time the Trojans and their fan base get a look at recently renovated 80,795 Notre Dame Stadium, whose new press box is now on the opposite side of the field from where it once was in the storied history of the venue.

The Obvious: The USC/Notre Dame series began in 1926.

The Not So Obvious: The Irish lead the series against the Trojans 46-36-5 (not including the 2005 victory by the Cardinal and Gold, which was vacated by NCAA penalty).

The Obvious: As per Notre Dame Weekender tradition, the entire Trojans Marching Band, Song Girls, and entire unit will be in Chicago and at Notre Dame Stadium.

The Not So Obvious: If you’re staying in Chicago, make sure you catch Fridays free pep rally at the Navy Pier, which begins at noon. The rally will be located at the recently-renovated “Wave Wall Steps” on the south side of the pier. On game day, the TMB will perform at halftime and will be seated in Section 117, Rows 4-15. FYI, the Midwest trip is yet to be fully funded, so a tax-deductible donation of any amount would be greatly appreciated. If you give $100 or more, you’ll receive a special USC/ND spirit pin. https://app.mobilecause.com/vf/TRAVEL

The Obvious: The Trojans have no players from the state of Indiana.

The Not So Obvious: Notre Dame has 11 players on its roster from California.

The Obvious: And finally, the winner of Saturday’s game will be awarded the annual “winning team” shillelagh, which will reside on the victor’s campus for a full year.

The Not So Obvious: There has been actually two shillelaghs in the USC/ND series. The second shillelagh was commissioned when the first one ran out of space. For the record, there are now 46 Irish shamrocks, 36 Trojan heads, and 5 combined medallions on the second shillelagh. The shillelagh does not include one USC win because of NCAA penalty or there would be 37 Trojan heads. Now comes question of the week: Who will add to their shillelagh totals after Saturday night’s bloodletting?