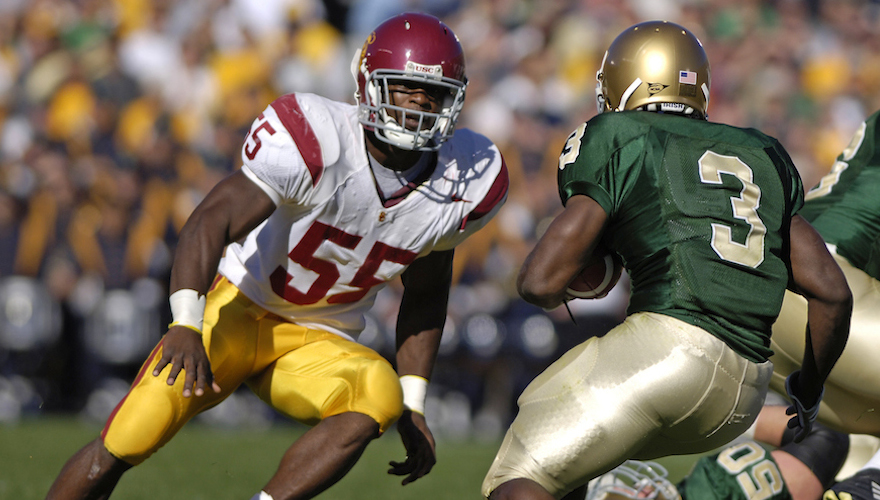 The Obvious: In the 87th meeting of college football’s greatest intersectional rivalry, the unranked USC Trojans (3-2 overall, 1-2 Pac 12) will be looking to rebound from a stunning coaching change and upset loss at the expense of the No. 14 Notre Dame Fighting Irish (5-1) on Saturday night in Notre Dame Stadium (4:30 PDT/7:30 p.m. EDT/NBC).

The Not So Obvious: The Trojans will be looking to reverse their last visit to Notre Dame Stadium when they lost 14-10 in dramatic fashion, and Ed Orgeron, now at LSU, was the Trojans interim head coach. Today, they have another interim coach in offensive coordinator Clay Helton, who replaced Steve Sarkisian. The Trojans have now had four coaches in four years of battle with Notre Dame (Lane Kiffin, Orgeron, Sarkisian, and Helton).

The Obvious: Whenever there’s a coaching change, especially if it’s an interim head coach, there can be immediate changes in play and protocol.

The Not So Obvious: Interim head coach Clay Helton made a major change this week when he allowed players’ parents to return to practice. Another immediate shift in policy was less obvious. Under Steve Sarkisian, the team was expected to fly to South Bend on Friday. Helton, however, changed the departure time, and the team flew into South Bend on Thursday evening.

The Obvious: The Trojans are 6 ½ -point underdogs to Notre Dame.

The Not So Obvious: Since 2003, the Men of Troy have won five of their last six outings in South Bend. Overall in Notre Dame Stadium, the Trojans are 14-24-1. It might not seem impressive, but they have the most wins of any Irish opponent in Notre Dame Stadium history. The Trojans have also won 10 of the past 13 meetings with the Irish, but all three losses have been since 2010.

The Not So Obvious: The NBC broadcasters for Saturday night’s game will be Dan Hicks (play-by-play), Doug Flutie (analysis), and Kathryn Tappen (sidelines).

The Trojans four-hour pre-game show will commence at 12:30 p.m. (PDT) with Arbogast, Jackson, Moore, WeAreSC.com publisher Garry Paskwietz, Steve Mason, Harvey Hyde, Katie Boggs, and Shaun Cody. There will be a two-hour post-game show following the conclusion of the game with Chris Fisher and Shaun Cody.

The Not So Obvious: The Notre Dame broadcast can be heard on flagship station WSBT 960 AM with Don Criqui (play-by-play), Allen Pinkett (analyst) and Jeff Jeffers (sidelines).

The Obvious: Everybody has an opinion on the final score of Saturday’s game.

The Not So Obvious: Highly respected Notre Dame columnist Lou Somogyi of Blue and Gold says, “ My preseason pick was Clemson and USC as the losses in a 10-2 regular season, so this goes against my better judgment because I’m gutless. USC will be extra dangerous because of the loss to Washington.” Somogyi, however, predicts the Irish 27-26.

The Obvious: Through five games, the Trojans offense is averaging 39.8 points per game while the Notre Dame defense is allowing 21.2 points per outing.

The Obvious: The South Bend weather report for Saturday calls for cloudy with a high of 48, a low of 32 degrees, and 42 degrees (feels like 37 degrees) at kickoff.

The Not So Obvious: The real weather report will be whether the Trojans can come together after the official termination of Steve Sarkisian and the elevation of offensive coordinator Clay Helton to interim head coach The general consensus is that Helton has the experience and respect of the players to again handle the position, which is his second interim time around with the Trojans. A key will be whether the Trojans team can react the same way it did in the 2013 season when Ed Orgeron was elevated to interim head coach, and Coach O virtually turned the downward spiral of the Lane Kiffin era completely around. Whether Helton can recapture that lightening in a bottle is questionable, but there are experienced players from that time period, like QB Cody Kessler, who know the drill.

A real key is whether the Trojans assistant coaches can also capture the former magic. One of the strong points of the Orgeron/Helton interim era was that the other assistants were so supportive and not, at least outwardly, worried about their future. This, however, is a different staff, so we’ll see whether they’re all on the same page.

The Trojans offense will be centered around quarterback Cody Kessler who had a not-so-Heisman game against the Washington Huskies. Last time the Trojans were in South Bend, Kessler was strong in a tough game at ND, and last season he lit up the Fighting Irish with six touchdown passes. It remains to be seen how Helton, who is now totally free of Sarkisian’s play calling suggestions, changes the offense.

It will be intriguing whether the Trojans increase their commitment to the rushing game and how the tailback rotation is used. With the loss of All-Pac-12 center Max Tuerk (knee), we’ll find out whether the loss of Max changes the way the offensive line performs and if its game suffers. The spotlight will also be upon O-line coach Bob Connelly to see if he can rally his troops to make a dent in a suspect Notre Dame defense. Another question: Will the O-line be able to pass block and will new center Toa Lobendahn be able to make the right line calls and audibles?

Defensively, the Trojans will be missing defensive tackle Claude Pelon (knee). The Irish offensive line is very good and very physical, so we’ll find out if the Trojans front 7 can handle the physical style of play reminiscent of Stanford. Defensive coordinator Justin Wilcox will be further under the microscope because he was Sarkisian’s hire and can no longer cling to that type of security. It will be interesting to see with Sark no longer in the picture whether Wilcox’s defense becomes more liberal or conservative in his directives of blitzes and defensive line twists and stunts.

The real weather is expect to be in the low 40s and into the high 30s late in the game, so we’ll find out whether the weather becomes a nemesis of the Trojans.

The Obvious: The Trojans interim head coach is Clay Helton, and he’ll have at least seven games and possibly a bowl game to throw his hat in the Trojans head-coaching candidate ring.

The Not So Obvious: The good news for Trojans fans and the team is that Helton has plenty of experience being a USC interim head coach. He was given deserved kudos over his handling the Men of Troy to victory over Fresno State in the 2013 Las Vegas Bowl.

The Obvious: The head coach of Notre Dame is Brian Kelly, who is in his 6th season with the Irish.

The Not So Obvious: Kelly’s name has been out there as a possible candidate for the USC job. He has tried to deny that he is going anywhere. As for the game, the Trojans have proven to be highly susceptible to a physical, pounding ground attack, and the Irish have the horses to make it rough and tough inside the pit. You can bet Kelly won’t hesitate to keep the ground invasion continuous if it’s working.

The Obvious: Trojans preseason All-American center Max Tuerk has been lost for the season with a torn ligament in his right knee.

The Not So Obvious: Sophomore Toa Lobendahn replaces Tuerk and fans should take notice of the center-to-quarterback exchange during the game. In the past, Lobendahn has had issues with the exchange, but he got plenty of reps at center against Washington.

The Obvious: The Irish offense is led by sophomore quarterback DeShone Kizer, who is 19th nationally in passing efficiency and has rushed for more than 100 yards and has three running TDs.

The Not So Obvious: In addition to Kizer, senior running back C.J. Prosise is in the nation’s Top 20 in all-purpose running, rushing and scoring. Junior Will Fuller has the fourth-most career touchdown catches (23) in ND history and is sixth nationally in receiving TDs and 20th in receiving yards. The Irish offensive line is manly and provides for a punishing running attack.

The Obvious: The Trojans defense is led by junior All-Pac-12 linebacker Su’a Cravens, who figures to be a high NFL draft choice this spring.

The Not So Obvious: The Notre Dame defense is led by junior linebacker Jaylon Smith, senior linebacker Joe Schmidt, and senior safety Elijah Shumate. Smith is considered a sure first round draft pick while Schmidt is the glue to the Irish defense and a former walk-on out of Santa Ana (Calif.) Mater Dei.

The Obvious: The Trojans currently have no players from the state of Indiana.

The Obvious: Chris Brown plays for both the Trojans and the Irish.

The Obvious: The winner of the USC/ND game gets yearlong possession of the Shillelagh.

The Not So Obvious: The four-foot Shillelagh, which is a Gaelic war club made of oak or blackthorn saplings from Ireland, has ruby-adorned Trojan heads with the year and game score representing USC victories, while emerald-studded shamrocks stand for Notre Dame wins.

The Obvious: Saturday night’s game at Notre Dame Stadium is a sellout.

The Not So Obvious: It marks the 248th consecutive sellout in Notre Dame Stadium.

The Obvious: And finally, Saturday marks the 10th anniversary of the famous 2005 USC/ND game that is referred to as the “Bush Push.”

The Not So Obvious: Most remember the twisting touchdown by Trojans quarterback Matt Leinart from the 1-yard line with three seconds remaining. What is lost is that the drive was 75 yards, which included that thrilling fourth-and- 9, 61-yard pass play, which was an audible. Leinart to wide receiver Dwayne Jarrett, you can be sure the Irish haven’t forgotten it.