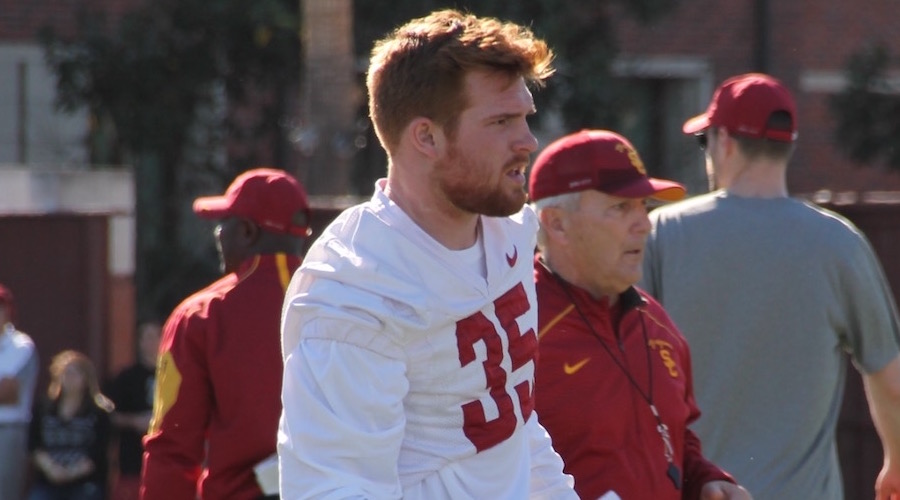 The Obvious: The USC Trojans have begun “summer” team workouts in preparation for training camp in early August.

The Not So Obvious: Just how much one can learn regarding the 2016 Trojans depends on what you’re looking for. There’s no way to know if the defensive line or offensive line will be dominating next season. What can be learned is the team’s work ethic, character, and leadership. That in itself is a core value in developing a team. Probably the most intriguing aspect of these workouts is how the new freshmen adjust to the elite athleticism of their new teammates and the challenge of learning the playbook.

The Obvious: At some level, a number of Trojans are still recovering from off-season surgery.

The Not So Obvious: No player in summer workouts will be watched with more scrutiny than sophomore inside linebacker Cameron Smith (photo above), who is still recovering from knee surgery and a shoulder sprain and will play a vital role in how well the Trojans defense functions in 2016. Cam will be brought along slowly and carefully with a healthy August training camp the main goal.

The Obvious: Junior Max Browne and redshirt Sam Darnold remain Trojans quarterback prospects and one of them will lead the Trojans against Alabama in the season opener in Dallas.

The Not So Obvious: Certainly nothing will be decided regarding Browne or Darnold during these summer workouts. However, each quarterback will be vying for their teammates trust and direction. It’s kind of like the primary elections. As of now, one could reasonably say that Browne is a current team leader with Darnold’s actions speaking louder than words.

The Obvious: During summer workouts, there can always be a surprise or two in position changes that wasn’t on display during spring practice.

The Not So Obvious: One of the early surprises in this week’s opening session of summer workouts was offensive tackle Chuma Edoga playing along the defensive line. Is this an experiment or foreshadowing of things to come? The Trojans are in obvious need of defensive line help and depth. For the record, at McEachern High (Powder Springs, Georgia), Chuma did play some defense.

The Obvious: Blue and Gold is a respected publication that covers Notre Dame on a yearly basis.

The Not So Obvious: In its early appraisal of the Trojans, B&G writes, “ This is the one game on the Fighting Irish slate where (Coach Brian) Kelly’s team is the likely underdog. USC’s talent can match up with most anyone in the country, but it’s going to be more about leadership and resolve while attempting to stabilize its program under head coach Clay Helton, who fired four coaches (three on defense) after last year’s six-loss season.”

The Obvious: In its USC analysis, Blue and Gold questions whether the Trojans can survive a brutal schedule by the time they play the Irish in late November in the Coliseum.

The Not So Obvious: Blue and Gold writes, “USC opens with defending national champion Alabama in Arlington, Texas, and then also has road trips to defending Pac-12 champion Stanford and then to Utah. November will be a gauntlet with three teams it lost to last year: Oregon, at Washington, and Notre Dame – with cross-town rival UCLA in between. How much will it have left once it faces Notre Dame?”

The Obvious: Lynn Swann, the former Trojans All-American wide receiver, will soon assume the position of athletic director at the University of Southern California.

The Not So Obvious: Swann took to social media to express his condolences on the passing of Muhammad Ali. Swann wrote, “Ali set the stage for all of us to be confident in who we are and our beliefs. As people and athletes.”

The Obvious: Verne Lundquist, who has called a number of Trojans football games over a brilliant broadcasting career, has been the voice of the SEC ON CBS since 2000.

The Not So Obvious: Lundquist will step down from his lead college football role at CBS Sports following the 2016 season.

The Obvious: FOX sports has released its early college football television schedule for 2016.

The Not So Obvious: The Trojans will appear on FOX Sports 1 when the Men of Troy travel to Utah on Friday night, Sept. 23, at 6 p.m. PT.

The Obvious: Brent Musburger is a longtime voice of college football on ESPN and now the SEC Network.

The Not So Obvious: Musburger, who has called many Trojans came in the past, has agreed to a multiyear contract extension with ESPN and will continue to be the voice of the SEC Network.

The Obvious: The Pac-12 will hold its football championship game on Friday night, Dec. 2, at Levi’s Stadium in Santa Clara.

The Obvious: And finally, Father’s Day will be Sunday, June 17

The Not So Obvious: If you’re looking for a USC Father’s Day gift, you might want to investigate the following offering. The Trojans have announced a Father’s Day Package for the Utah State game (Sept. 19/11 a.m. PT). Included in the package are two Trojan athletic fund tickets (located in yard-line sections) one campus parking pass, pre-game Coliseum locker room tour (2 people – 8 a.m. tour), two commemorative Marcus Allen bobbleheads (shipped after the game), an exclusive USC BBQ spatula, and a commemorative ticket. The cost? Just $500 per package.