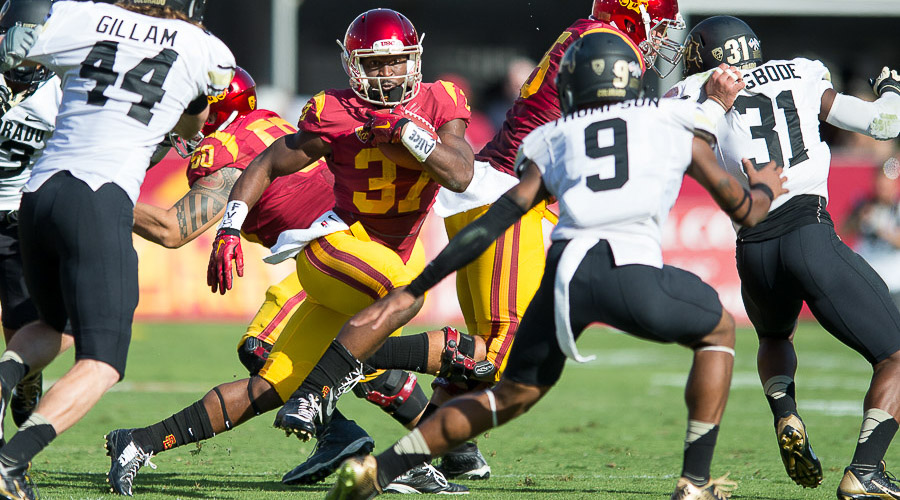 The Obvious: The Trojans opened as six-point favorites over the Cornhuskers.

The Not So Obvious: The Men of Troy are 3-0-1 against Nebraska, who would love nothing better than to give their interim head coach and the university its first victory over the Trojans. As an added note, the Trojans have played six games in San Diego and have a 2-3-1 record.

The Obvious: The San Diego weather report for Saturday calls for sunny with a high of 65 and a low of 44 degrees.

The Not So Obvious: The real weather report will be whether Nebraska is as motivated as the Trojans. We’ll find out early who wants it more in terms of energy and execution. It figures that the Trojans have the edge in overall talent, but funny things happen in bowl games with unusual circumstances. We’ll see whether Steve Sarkisian’s is team fired up for what figures to be the last hurray for a select number of underclassmen that have their eyes set on the 2015 NFL draft.

Offensively, we’ll see whether the young Trojans offensive line can handle the physical Huskers defense led by all-star defensive end Randy Gregory. Wisconsin was able to do it with ease, but can the Trojans do it with such youth? We may be watching the last game for Trojans tailback Javorius “Buck” Allen and wide receiver Nelson Agholor. We’ll find out whether their performances in the Holiday Bowl is a factor in terms of early entry in the 2015 NFL draft. Trojans junior quarterback Cody Kessler has been remarkable during the season, but he needs to continue to show he does it on a big stage. Maybe this isn’t the Nebraska of old, but Kessler needs to show he’s successful against all comers.

Defensively, the Trojans will have to flex their muscles and make sure that Nebraska senior standout and AP second-team All-America running back tailback Ameer Abdullah doesn’t become the next Mike Rozier, the former Huskers Heisman Trophy winning tailback. Abdullah is that good and although he was injured for part of the 2015 campaign, he is healthy now. The Trojans defensive front, led by junior All-America defensive lineman Leonard “Big Cat” Williams, needs to keep NU’s athletic sophomore quarterback Tommy Armstrong Jr. from getting off both running and passing the ball. Not a consistent passer, we’ll see whether the Trojans defense can effectively contain Armstrong and stop him from getting into a passing rhythm. We also find out whether Nebraska goes right after Trojans new nose tackle Delvon Simmons, who has replaced junior Antwaun Woods, who is recovering from shoulder surgery. Then, of course, there is the defensive scheming of defensive coordinator Justin Wilcox. We’ll see whether the Trojans can execute his plan.

The Trojans will be wearing their home uniforms, but we’ll find out whether they’ll also be wearing their metallic red helmets on Saturday night. They didn’t against Notre Dame in the Coliseum and you saw the positive results.

The Obvious: Saturday’s game from the Qualcomm Stadium will be telecast live on ESPN (5:00 p.m. PST/8 p.m. EST).

The Obvious: Saturday’s Trojans game from Qualcomm Stadium will be broadcast on the Trojans flagship station, ESPNLA 710 Radio, with Pete Arbogast (play by play), John Jackson (analyst) and Jordan Moore (sideline) describing all the in-game action.

The Not So Obvious: For those that can’t get the Trojans flagship broadcast in San Diego, EPSN radio will cover the game with play-by-play voice Bill Rosinski, analyst David Norrie, and Joe Schad. The game will also air on the Nebraska network, flagship station KFAB 1100AM, with Greg Sharpe, analyst Matt Davison, and sideline reporter Lane Grindle.

The Obvious: Both USC and Nebraska have future NFL running backs.

The Not So Obvious: The Trojans feature Javorius “Buck” Allen (8 100-yard rushing outings this year, leads the Pac-12 in all-purpose yards and is the only player in the country with 12 games of 100-plus yards from scrimmage.) For Nebraska, Ameer Abdullah (1,523 yards, 18 touchdowns, is in the national Top 15 in rushing, rushing TDs, all-purpose yards and scoring) will give the Trojans a challenge.

Both tailbacks are from the Southeast region of our country. Trojans tailback Buck Allen is from Tallahassee, Florida, while Huskers tailback Ameer Abdullah is from Homewood, Alabama.

The Obvious: The Trojans quarterback is junior Cody Kessler, who will be looking to show the country that he is a strong 2015 Heisman Trophy candidate.

The Not So Obvious: The Nebraska quarterback is sophomore Tommy Armstrong, a dangerous athlete when he’s on his game passing as well as running. Armstrong (6-foot-1, 220 pounds), who calls Cibolo, Texas, home, had 2,314 passing yards and 664 rushing yards with 24 combined touchdowns.

The Obvious: The Trojans first-year head coach is Steve Sarkisian, who can make a big statement regarding the direction of his program by beating the Cornhuskers and finishing 9-4.

The Not So Obvious: The Nebraska interim coach head coach is Barney Cotton, a lifer in the Cornhuskers program, having played at Nebraska, been an assistant coach and also has a son on the team. It has been unofficially made public that after the Holiday Bowl, Cotton is heading to be the offensive coordinator at UNLV under anticipated new head coach Tony Sanchez, formerly of powerhouse Las Vegas Bishop Gorman High.

The Obvious: The Trojans have never appeared in the Holiday Bowl.

The Obvious: The Trojans have no players on their roster from the state of Nebraska.

The Obvious: In its history, 69 Trojans claim San Diego has their hometown.

The Not So Obvious: Qualcomm Stadium opened in August of 1967 and has hosted a number of memorable moments including Willie Mays 600th home run, Lou Brock’s 892nd stolen base to tie Ty Cobb’s record, the inaugural Holiday Bowl (1978), the 1978 MLB All-Star Game, and Super Bowl XXll and XXXVll,

The Obvious: As part of the pageantry of a bowl game, there is great put effort into a pregame show.

The Not So Obvious: The Holiday Bowl is no exception. Before the game, fans inside Qualcomm Stadium will be treated to performances by both university marching bands, spectacular pageantry, Navy LeapFrog parachute jumpers, and, of course, a National University Holiday Bowl tradition, The Big Flag, the football field size American Flag. All the pregame action starts 30 minutes before kickoff.

The Obvious: As part of the pageantry of a bowl game, there is great effort into a halftime show.The Not So Obvious: Get ready for the Dr. Pepper/Stater Bros. Halftime Show with “world-class pageantry,” marching bands, and an “unbelievable fireworks display that you have to see to believe!” This band, dance and cheer halftime extravaganza is a production of WorldStrides Heritage Performance Programs.

The Obvious: Bowl games like to take teams to various city attractions for the obligatory photo shoot.

The Not So Obvious: The Trojans have already visited the San Diego Zoo and SeaWorld, and Friday morning, both teams were welcomed aboard the USS Essex at the 32nd Street Naval Base. Besides getting a tour of the Essex, both teams also were treated to lunch by the Navy and Marines.

The Obvious: And finally, the Trojan Family is hosting pregame party (1 p.m. – 4 p.m.) on Saturday outside Qualcomm Stadium.

The Not So Obvious: It’s an all-you-can-eat lunch buffet, a hosted bar, games, Traveler, Song Girls and the Trojan Marching Band. Admission is $100 for adults and $50 per child (ages 3-10). FYI, the party will be located in Section L of the Qualcomm Stadium parking lot. It’s time to party!