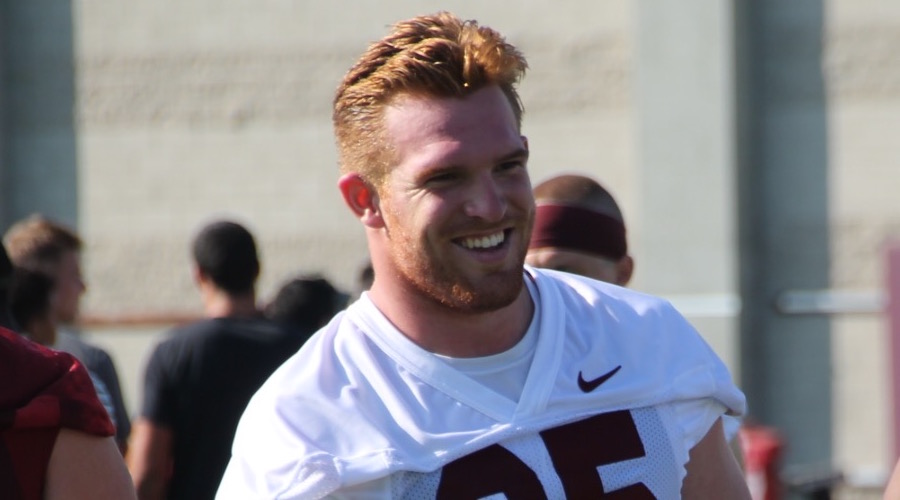 The Obvious: Despite the fact the USC Trojans are the consensus No. 4 preseason team in the country, according to the AP Top 25 and Coaches Poll, it was just a matter of time until the pendulum swung in the opposite direction and predictions of doom, gloom, and “overrated” surfaced, less than two weeks before the Men of Troy open the 2017 season by hosting the defending Mid-America Conference champions, the Western Michigan Broncos.

The Not So Obvious: Are the 2017 USC Trojans, who got two first place votes in the AP Top 25, the real deal or are cardinal and gold fans in for one giant “overrated” letdown? With Sam Darnold back at quarterback, nobody can argue logically that the Trojans are capable of winning every regular season game. However, according some emerging naysayers, Clay Helton’s team could drop two, three, or even four games, which would make for a disaster. In other words, it’s really CFP playoffs or bust.

The Obvious: The Trojans’ first three games are all at home, and the opponents are Western Michigan, Stanford, and Texas, with Stanford and Texas being ranked No. 14 and No. 23 in the AP Top 25 and Coaches Poll, respectively.

The Not So Obvious: The naysayers are convinced that the Trojans will drop one of the three aforementioned home games. Logic says a loss won’t be at the hands of Western Michigan, but that it’s likely that Stanford or Texas, which could pull put the Trojans on the track for most disappointing team in America. Of course, if the Cardinal and Gold can sweep the trio of early games, it’ll go a long way early in the season in preventing the “most disappointing” stigma.

The Obvious: Mel Kiper is ESPN’s draft guru and he also dabbles in college rankings and predictions.

The Not So Obvious: Although Kiper heaps praise on Trojans quarterback Sam Darnold, he thinks that the Cardinal and Gold won’t reach the promised land of the CFP, predicting that Washington will win the Pac-12 and the national championship. On the Dari and Mel podcast, Kiper says, “I’m going to go with the Washington Huskies. I look at that team with (Jake) Browning who is a really good college quarterback, the coach (Chris Petersen), the way he prepares, the running game, with (Dante) Pettis in the return game, the line, the defense, every line of defense. They got studs up front and they got speed at linebacker. On the back end, they’ve got some developing talent and some veterans.” FYI, Kiper predicts the other  CFP Final Four members will be Ohio State, Florida State, and Auburn.

The Obvious: College Football News is a contributing publication for USA Today.

The Not So Obvious: In a story entitled “The Most Disappointing Team of 2017 Will Be…”, four out of the six writers polled predicted the USC Trojans will be the most disappointing team. Writes CFN staffer Rich Cirminiello, “USC. There’s something about a highly ranked Trojan team that creates an uneasy feeling in August. QB Sam Darnold is the real deal and worthy of the offseason hype. The rest of Clay Helton’s team? Not so much. Yeah, Troy will be the class of a soft South Division, but questions on both lines will keep the program from returning to the Pac-12 mountaintop.”

The Obvious: Peter Fiutak is another writer for College Football News who predicts the Trojans will not live up to the hype.

The Not So Obvious: Fiutak writes, “USC. The Trojans will hardly be a flop, but the expectations are at CFP-or-bust for a team that has a slew of concerns on both sides of the ball. Sam Darnold will be fantastic, and the team will be in the Pac-12 title chase all season long, but it’s a better league from top to bottom, the South won’t be hit by massive injuries again, and Washington, Stanford and Oregon are killers from the North. Think 10-2 USC instead of an 11-1 CFPer.”

The Obvious: Phil Harrison is yet another CFN writer that writes doom and gloom for the Cardinal and Gold.

The Not So Obvious: Harrison writes, “USC. The program just doesn’t have the same swagger it had under Pete Carroll, with a history of not sealing the deal. Yeah, there’s talent, there almost always is at a place like USC, but there are enough key losses on the line to make things tougher on Sam Darnold and the offense.”

The Obvious: There are writers that are prognosticating USC to be a flop, although they don’t see the Trojans in practice and whose alleged expertise are actually those of another conference.

The Not So Obvious: Take for instance College Football News contributing writer Jeremy Mauss who covers the Mountain West Conference. Regarding the Trojans, Mauss writes, “The Trojans will go up in flames once again and not live up to the hype of making the College Football Playoff. They likely will win the South and if things fall right could sneak into a major bowl game, but a playoff berth is not going to happen.” Wow!

The Obvious: Even local Southern California writers have questioned whether the Trojans are worthy of their lofty No. 4 preseason ranking.

The No So Obvious: Most local writers point out that the Trojans have significant questions as it pertains to the kicking game – namely placekicking – and are not quite convinced that the lack of experience at the wide receiver spots and the rebuilt offensive line won’t do in the Trojans at the worst possible time. Some have questioned the Trojans secondary, namely the corners.

The Obvious: The Daily Trojan is the campus newspaper of the University of Southern California.

The Not So Obvious: In its first edition of the first semester, the Daily Trojan’s sports staff did some predicting of its own. If you expected all five writers (Eric He, Oliver Jung, Julia Poe, Hailey Tucker, Angel Viscarra) to pick the Trojans to win the Pac-12, you’d be correct. However, only Jung and Poe, co-sports editors, predicted the Trojans to make it to the national championship game, with Jung predicting a national championship. Showing a degree of objectivity, He and Poe predicted Alabama to win it all while Tucker and Viscarra predicted Ohio State. Two writers (Jung and Poe) predicted the Trojans to finish 14-1 while the other three writers (He, Tucker, Viscarra) predicted a 12-2 finish.

The Obvious: The veteran Trojans players, especially those in the preseason All-America spotlight, are aware of the all this preseason hype and scrutiny, both the positive and negative, and plan to help the freshmen cope with the avalanche of media debate and conversations.

The Not So Obvious: Asked if the newly selected Trojans seasonal captains can harness the distraction of publicity being taken in by the young freshmen class – some of whom will play an early vital role in 2017 – quarterback Sam Darnold said, “Yes, I think as players it is our job to that. There is going to be hype around this program as long as we keep doing well. I think as captains, we can always talk to the team about that (rankings), but I think Coach Helton does a great job about that in team meeting. It’s just living one day at a time. Taking it one game at a time, that’s the biggest thing.”

The Obvious: Another 2017 captain for the Trojans is junior preseason All-America linebacker Cameron Smith (photo above), and he knows it’s important not to let the true freshmen buy into the hype.

The Not Obvious: Smith says, “I would tell them (the freshmen) who cares what people say. Who cares! It doesn’t matter if you’re No. 1 to start the season. It’s where you end up at the end of the season. Right now, we have to get better every week and get ready for Western Michigan. We don’t discuss the rankings in our locker room and we don’t care. We do what Coach Helton preaches, and we take that down into the locker room. We don’t need to talk about rankings, it’s not what we’re all about.”

The Obvious: And finally, Austin Jackson is a heralded true freshman offensive left tackle who is expected to see immediate playing time as a backup.

The Not So Obvious: On what he has been told on how to handle the preseason hype, Jackson said, “To be honest, we don’t even talk about it or even mention it (the preseason publications rankings, naysayers). When it (rankings) came out and we saw some of it on Twitter, it was kind of like ‘whatever’ because those rankings don’t mean anything. We need to win games and get to where we want to be. It’s most motivating for any team (to receive negative publicity of being called overrated). Deep down, we believe in ourselves and trust in ourselves. At the end of the day, we know we can be great.”