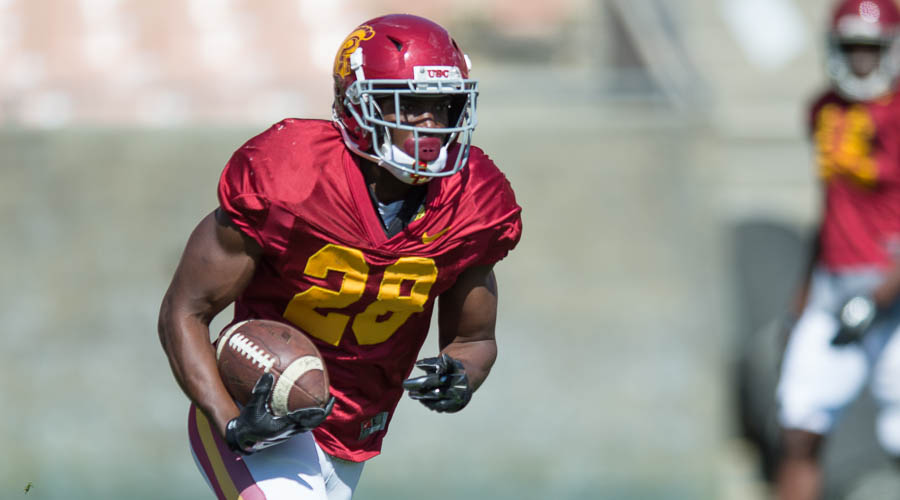 The Obvious: With just four precious spring practices remaining for the USC Trojans, one of the continuing areas of noteworthy competition is coach Tommie Robinson’s stable of quality running backs, which among the top three includes senior Justin Davis and sophomores Ronald Jones ll and Aca’Cedric Ware (above photo).

The Not So Obvious: While Davis and Jones shined last season and have continued to do so this spring, Aca’Cedric Ware, the chiseled 6-foot, 200-pound grinder out of DeSoto, Texas, and the pride of Cedar Hill High, has also served notice of a bright future, as well. Ware’s strength is running between the tackles, and despite his size, he is one tough cookie to tackle.

The Obvious: One of the first questions a reporter is obligated to ask Aca’Cedric Ware, who wears Anthony Davis’s legendary No. 28, is the origin of his first name.

The Not So Obvious: Regarding his first name, Ware revealed, “I would tell you if I could, but I am a Junior. I asked my grandmother and she says it means King Cedric.”

The Obvious: Because Aca’Cedric Ware carried the ball just 12 times as a true freshman, some clamor that he should have been redshirted, but he has certainly turned heads this spring with his physical style of running.

The Obvious: Thus far in his brief stints during last season and a more defined role in spring, Aca’Cedric Ware is modestly confident in describing his strengths as a running back.

The Not So Obvious: Ware said, “My strength right now is my physicality. I bring a more physical run game than the other backs.”

The Obvious: Trojans head coach Clay Helton has been impressed with Aca’Cedric Ware and believes the recruit out of the Lone Star State is just beginning to scratch the surface of his ability, which accounted for 2,440 yards (8.4 avg.) and 34 touchdowns as a high school senior in leading Cedar Hill to the Texas 6A-ll championship in 2014.

The Not So Obvious: Of Ware, Helton said, “The lights are kind of coming on for him. He’s one of those violent runners.”

The Obvious: While much of the competition of spring ball has been directed at other positions such as the great quarterback duel, there is a spirited battle of performances from the running backs, too, which has brought on some healthy competition.

The Not So Obvious: Regarding the spring competition, Aca’Cedric Ware said, “We all push each other. Like I said starting is fair game, so we are on each other’s heels. You know if one guy doesn’t get the job done, the next one will. We have a lot of talent in practice.”

The Obvious: There are those observers attending spring ball that say that Coach Tommie Robinson is seeing a lot of former Trojans All-Pac-12 running back Buck Allen in Aca’Cedric Ware.

The Not So Obvious: Ware said, “I am getting more opportunities to show what I can do. Everything is fair game, so they are giving me a lot of chances. He (Robinson) tells me to keep working hard, and he’s showing no signs of who’s playing more.”

The Obvious: Coach Tommie Robinson was well respected during his brief coaching stint at Troy (2013) before being let go by former USC head coach Steve Sarkisian and then quickly being hired by Charlie Strong at the University of Texas.

The Not So Obvious: Ware said, “I talked to him (Robinson) a lot when he was at the University of Texas and was recruiting me.”

The Obvious: The Trojans have been adding formations that feature two running backs in the backfield along with the quarterback, and there are times when both Aca’Cedric Ware and fellow Texan Ronald Jones ll are in that new formation.

The Not So Obvious: Ward revealed, “Yes, it’s a new package that we put in and it’s great. I like it.”

The Obvious: Being from a large state like Texas, it wouldn’t be difficult not to have met other high valued recruits of the same running backs position.

The Not So Obvious: Asked about whether he knew Ronald Jones ll in high school, Ware answered, “Yeah, that’s my guy. Our high schools (Cedar Hill and McKinney North, respectively) were almost an hour away from each other. I’d see him at the Texas Relays. If I seen him, I would catch up with him.”

The Obvious: And finally, Aca’Cedric Ware represents the type of talented, tough, and hardnosed player that Clay Helton believes he needs to be successful in the future.

The Not So Obvious: Clay Helton had a revealing perspective after Thursday’s practice as it concerns the word “talented.” Helton said, “My least favorite word in life is talent. I am sick of the words ‘we’re a talented team.’ I want to be known as a tough, technique, physical team. When you put talent with those three aspects, you’re going to win championships.” And the coach hopes that Aca’Cedric Ware is the epitome of that overall philosophy.