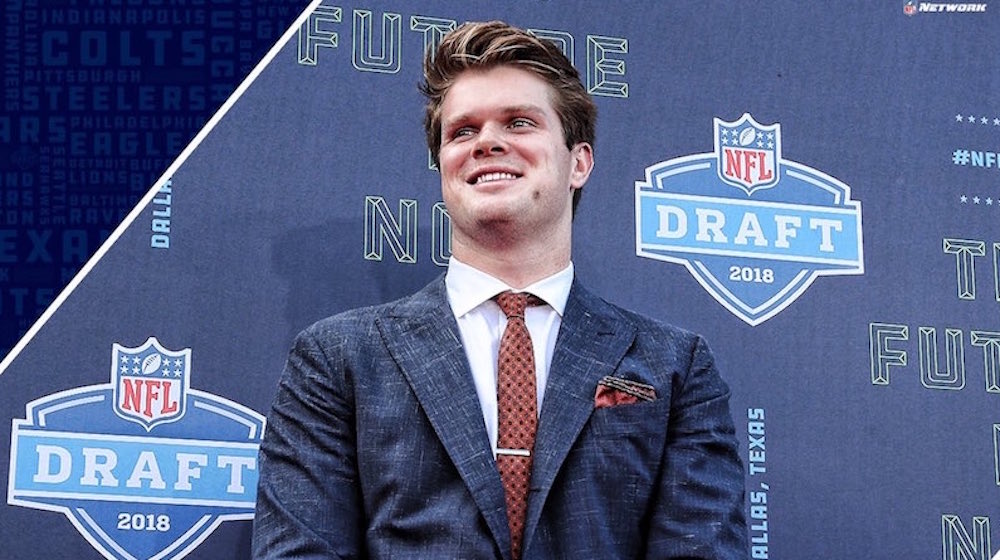 The Obvious: After intense speculation, debatable evaluations, and annual pre-draft rumors, former Trojans quarterback Sam Darnold (photo above) was selected by the New York Jets as the overall No.3 pick in the first round of the 2018 NFL draft.

The Not So Obvious: So, Sam becomes the third Trojan to be taken No. 3 overall in the first round of an NFL draft, joining a short but elite list that includes Hall of Fame offensive tackle Anthony Munoz (1980/Cinn.) and former All-America linebacker Chip Banks (1982/Cleve.) With the Jets first-round selection of Darnold, the Trojans maintained their lead as the all-time first round draft frontrunner (81) with the closest pursuer being Ohio State (79), who had two Buckeyes selected in the first round.

The Obvious: New York City is the media capital of the work, and sports takes a backseat to nobody in the Big Apple.

The Not So Obvious: Draft headlines in the New York City area on the Jets No. 3 selection of Sam Darnold included the New York Daily News screamer: “Jets strike gold by lucking into USC quarterback Sam Darnold with No. 3 pick in the NFL Draft.”

The Obvious: Manish Mehta is a columnist for the New York Daily news.

The Not So Obvious: Mehta wrote, “The football gods gave the Jets the most precious gift of all Thursday night with this message: Sometimes NOT sucking has its privileges. Less than a year after the Suck for Sam movement was born, this star-crossed franchise lucked into USC quarterback Sam Darnold with the third pick of the NFL draft. It was a Festivus Miracle for Gang Green, a stroke of great fortune typically reserved for others, a watershed moment for legions of tormented fans conditioned to feel unexplainable pain.”

The Obvious: The New York Post is another major NYC newspaper.

The Not So Obvious: A New York Post headline read: “Jets have quarterback of the future.” During the regular season, a good number of Jets fans wrote jerseys and shirts that read “Suck for Sam,” referring to a campaign for their heroes to lose in order to climb into a more advantageous drafting position. The Post wrote, “It turns out the Jets did not have to ‘Suck for Sam’ to land USC quarterback Sam Darnold.”

The Obvious: Needless to say, Sam Darnold was very happy to be selected by the New York Jets.

The Not So Obvious: Darnold quickly said he wasn’t worried about the pressure of playing in the Big Apple as the Jets’ No. 1 pick. Captain Comeback said, “No, no, wherever I was going to go, there was going to be pressure. I am just going to go do my job and do whatever the coaches ask me. I mean I am so happy to be in the NFL, but now it’s time to go to work.”

The Obvious: Oklahoma quarterback and Heisman Trophy winner Baker Mayfield was selected as the No. 1 overall first round draft pick by the Cleveland Browns.

The Not So Obvious: After all the rumors and innuendos about the expectations of being the No. 1 overall pick, Sam Darnold showed no outward indication that he was disappointed about not being the top pick. Sam said, “I mean it is what it is. You never know what’s going to happen in the NFL draft. I was on my toes ready to get that call, but once I didn’t, it was on to New York and now it’s the Jets and I couldn’t be happier.”

The Obvious: Like all sports fans, the New York fanatics will be expecting instant success from Sam Darnold.

The Not So Obvious: When questioned what the Jets and their fans can expect from him, Sam quickly said, “A lot of wins. I think that’s what I can bring that to a franchise, but at the same time I know that it’s a process. But, I am ready to go to work like I said.”

The Obvious: One of the great all-time defensive lineman for the Trojans is Leonard “Big Cat” Williams, currently a star starter for the Jets.

The Not So Obvious: Big Cat quickly welcomed Sam Darnold to his New York Jets family by tweeting: “Sam Darnold!!!! Lets goooo!! Welcome to the fam!! Fight on.”

The Not So Obvious: Prior to the draft, Shaw, who was a FOX television analyst for Thursday night’s draft, said – in his opinion – that Sam Darnold was the best quarterback in the draft. After Darnold’s selection by the Jets, Shaw said, “The guys (experts) have been right all along. This guy is a competitor. He’s got great feet and he throws the ball accurately from the pocket and he can escape the pocket and really hurts you. We had this guy tied down multiple times in two games this year and he finds a way to get out of trouble and he makes that one in a hundred toss pass over outstretched arms.”

The Not So Obvious: CAA Sports also represents the suddenly controversial Wyoming’s Josh Allen, who was selected No. 7 by the Buffalo Bills after the Buffs made a draft trade with Tampa Bay. CAA Sports actually had both Darnold and Allen working out together through the pre-draft process.

The Obvious: Sam Darnold showed remarkable poise in strolling to the podium for the historic announcement of his No. 3 selection and displayed the down-to-earth media savvy for which he has been well schooled.

The Not So Obvious: One of the reasons that Sam appeared so ready to deal with the media after his selection was the training he received from USC assistant sports information liaison Katie Ryan, who Darnold invited to his draft day in Arlington, Texas. Darnold credits Ryan for helping him learn the ropes of responding to the media. Certainly that training will be put to the test in New York.

The Obvious: There was much conjecture before the draft whether Sam Darnold or Josh Allen would go first overall and be taken by Cleveland.

The Not So Obvious: Former NFL quarterback and quarterback guru Jordan Palmer worked with both Darnold and Allen leading up to the draft. Yes, the same Palmer who works with Trojans’ incoming freshman phenom JT Daniels.

The Obvious: Friday night marks the second and third rounds of the NFL draft, and ESPN’s Todd McShay believes that the best second round pick that will likely make a Pro Bowl is Trojans’ outside linebacker Uchenna Nwosu.

The Not So Obvious: Of Nwosu, McShay wrote this week, “There are some good choices here, but I’ll take USC’s Unchenna Nwosu. As a 3-4 outside linebacker, he can keep guys off his pads, has shock in his hands, and good suddenness rushing the passer.”

The Obvious: And finally, a reminder that the draft continues Friday afternoon (4 p.m. PDT) for Rounds 2-3 on FOX and ABC and the four cable outlets (ESPN ESPN2 ESPN Deportes, and the NFL Network), which means the focus will be for Trojan fans on the potential destinations for RB Ronald Jones lll, LB Uchenna Nwosu, and DL Rasheem Green. All three are expected to be taken Friday.

The Not So Obvious: Draft rounds 4-7 will conclude on Saturday and coverage being at 9 a.m. (PDT). Two broadcast networks (Fox and ABC) and four cable outlets (ESPN, ESPN2, ESPN Deportes, NFL Network) will handle the final day, and this is the first time that all seven rounds of the draft will have been broadcast live on free and cable TV.

"I'm gonna save this forever!"#SamDarnold reads a letter from his sister after being selected #3 overall by the @nyjets! #NFLDraft pic.twitter.com/wNaQhmkk2P