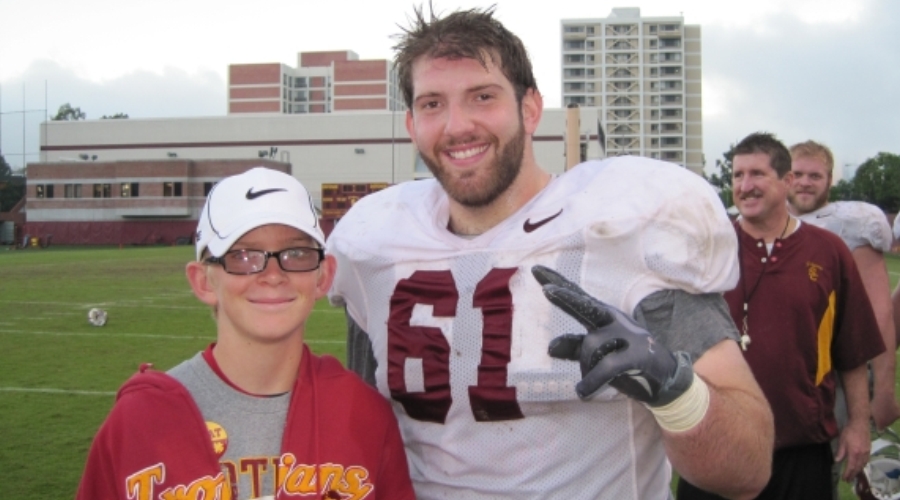 The Obvious: Jake Olson, a 6-foot-4, 195-pound snapper out of Orange (Calif.) Lutheran will join the Trojans in fall camp as a walk-on.

The Not So Obvious: Coach Steve Sarkisian is on record as saying that Jake Olson will eventually be given an opportunity to snap in a game. The Trojans second-year head coach said, “Someday, he’s going to snap in a game for us. When? I don’t know, but it will happen. When that day comes, it will be awesome.”

The Obvious: The Jake Olson story is one that is made for Hollywood and a storybook ending.

The Not So Obvious: By now, you probably know the story that Jake (photo above with Kristofer O’Dowd) lost his sight due to cancer but is a survivor. The young man was befriended by his favorite college football team as a 12-year-old and will now join the Men of Troy as a long snapper. This story is so overwhelming that even nearby Tinseltown may have a hard time waiting until his amateur status (NCAA rules) contemplating a movie.

The Obvious: Jake Olson will attend USC on a Swim with Mike scholarship.

The Not So Obvious: Swim with Mike refers to former Trojans swimmer Mike Nyeholt, who was paralyzed from the chest down in a motorcycle accident. A popular annual event on campus, it has raised more than $16 million and has also funded scholarships at 85 universities.

The Obvious: With the NFL draft fast approaching next week, former Trojans All-America defensive tackle Leonard Williams has been doing a number of national media interviews.

The Obvious: Because of his unique and stylish long hair, Leonard Williams has been several been given a number of nicknames including “Leo the Lion” and “The Big Cat.”

The Not So Obvious: Asked which nickname he refers, Williams told ESPN that although his friends call him “Leo the Lion,” he likes the media-given nickname of “The Big Cat.”

The Obvious: Most kids in their teens have dreams of getting their driver license and driving a car.

The Not So Obvious: Leonard Williams still hasn’t gotten his driver license, and it would be interesting to note how many players before they drafted didn’t have their license either.

The Obvious: Many kids use a skateboard as a means of transportation.

The Not So Obvious: Leonard Williams said that he still uses a skateboard to get around the Trojans campus and that when he graduated Daytona (Fla.) Mainland High, his high school coach gave him a skateboard as a graduation present.

The Obvious: Despite being swept in San Francisco, the Dodgers are still leading the Western Division of the National League.

The Not So Obvious: Leave it to the Dodgers to find a way to cross-market their product. On April 28th, the Boys of Summer will pay tribute to the Trojans by having a USC Night against the rival Giants. Included in the “special” USC package will be a USC/Dodgers themed T-shirt, and, yes, the shirt will be cardinal and the “LA” will be in gold.

The Obvious: Steve Smith is a former Trojans All-America wide receiver who had a brief but successful six-year career in the NFL until he was forced to retire due to a severe knee injury.

The Not So Obvious: Like most professional athletes, Smith has had to make the tough transition from playing into the workforce. Steve told The Times, “I tell people I feel one part of me died and another part of me is birth, because football was my life, my love. I worked so hard. Transitioning was definitely tough. I feel you have to get into something you love and enjoy, so you can have that passion in the next phase.”

The Obvious: Upon retirement, many athletes try to stay connected to the game they played or get involved in something related to athletics.

The Not So Obvious: For Steve Smith, he found his niche by becoming a business partner in the Xplode Training Center in Chatsworth. The emphasis is not just the physical aspect of playing a sport but the development of a player’s character.

The Obvious: One of former Trojans head Pete Carroll’s favorite things to do with his team was to take them on non-football related field trips.

The Not So Obvious: One of the places Carroll loved to take his team was to the beach. So it should come as no surprise that current Trojans head coach Steve Sarkisian, a Carroll disciple, is following the lead of his mentor and recently took a large group of his Trojan players to a Hermosa Beach.

The Obvious: One of the highlights of each Trojans athletic year is the annual USC Hall of Fame Induction Ceremony, which will be held May 16 in the John McKay Center.

The Not So Obvious: For former USC Hall of Fame inductees, each member is given two complimentary tickets for the pricey affair. How pricey? Rumor has it the cost of a ticket is $300 per ticket. Do they take MasterCard?

The Obvious: And finally, a combined sixteen former athletes, coaches and media members will be inducted into the 2015 USC Hall of Fame.