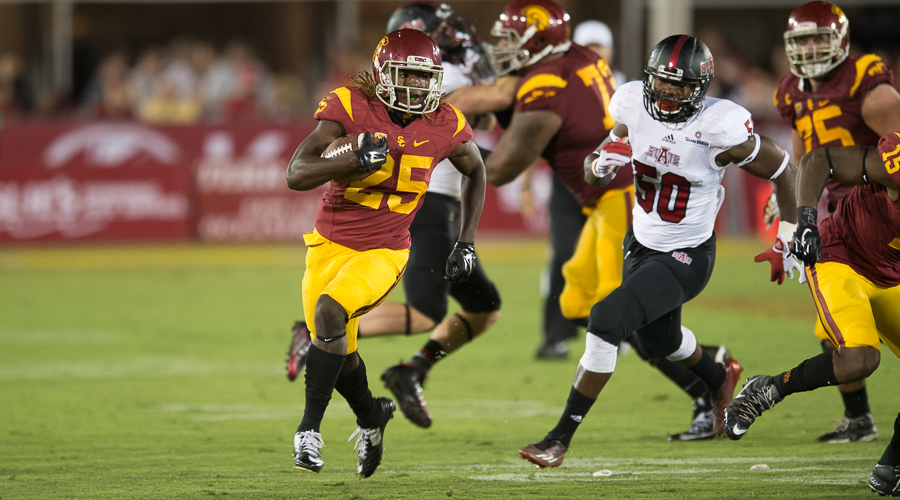 The Not So Obvious: Idaho will be the second consecutive Sun Belt Conference foe for the 2015 Trojans, and if waxing Arkansas State, 55-6, last Saturday night is any indication, the Men of Troy will begin emptying their entire roster not long after the lighting of the Coliseum torch beginning the fourth quarter of play.

The Obvious: The Trojans opened as 42 ½ -point favorites to defeat Idaho.

The Not So Obvious: If the point spread is accurate, the Trojans, for the sake of mercy, might want to suggest that if their lead hits 50 points or greater, some sort of running clock be implemented for humanitarian purposes. We could be looking at 65 points or more on the Coliseum scoreboard.

The Not So Obvious: Pac-12 Network broadcasters for Saturday night’s game will be Roxy Bernstein (play-by-play), Glenn Parker (analysis), and Jill Savage (sidelines).

The Not So Obvious: The Idaho broadcast can be heard on flagship station KZFN 106.1 FM with Dennis Patchin (play-by-play) and Ryan Phillips (analyst).

The Obvious: The Los Angeles weather report for Saturday calls for partly cloudy with a high of 85 and a low of 72 degrees.

The Not So Obvious: The real weather report will be whether the Trojans can avoid injuries in a game that figures to be a blowout. With Stanford coming to the Coliseum next Saturday, we’ll see whether head coach Steve Sarkisian will elect to substitute liberally early and often. There is the question of keeping his starters in game condition knowing that the Stanford game will be an all-out physical war. Whether that’s a factor in Sark’s decision-making remains to be seen.

It figures that the Trojans can name the score, but it will be of interest whether Sarkisian will show compassion for head coach Paul Petrino’s Idaho club, which lost its opener, 45-28, to Ohio University last week. We’ll see whether Sark wants to pad some of quarterback Cody Kessler’s passing statistics in his senior’s bid for Heisman Trophy votes. If the game goes as predicted, Trojans fans should see plenty of the freshman running backs Ronald Jones ll (photo above), Dominic Davis, and Aca’Cedric Ware and the expected return of junior Justin Davis. One should expect that starting senior tailback Tre Madden will hit the 100-yard rushing mark without working up much of a sweat. The Trojans receiving squad figures to have a big statistical outing, led by sophomore JuJu Smith-Schuster. One thing to consider regarding the Trojans overall offense is whether Sark will show much of the playbook knowing Stanford will be going over Saturday’s game film.

Defensively, it will be interesting whether Justin Wilcox’s defense will play with a killer attitude against a vastly inferior offense. The key here is whether the Trojans will increase their physicality and hone a bully defensive personality. There was encouragement last weekend regarding the play of sophomore defensive linemen Kenny Bigelow Jr. and senior Greg Townsend Jr. against Arkansas State, as well as the play of senior tackle Delvon Simmons, and freshmen linebackers Carmeron Smith, Osa Masina, and Porter Gustin. Freshman corner Iman Marshall didn’t disappoint and figures to only get better. The Trojans also received great performances last Saturday from sophomore safeties Chris Hawkins (who also played corner when Adoree Jackson left in the first quarter) and John Plattenburg, both of whom will need to continue their standout play in preparation for Stanford.

Perhaps the most intriguing aspect of Saturday night’s will be the return of all-purpose athlete Adoree’ Jackson, who departed last Saturday’s game with an abdominal strain. Let’s see whether Sark allows his Trojans gifted performer to play into the final quarter for the sake of conditioning.

The Obvious: A base ticket price for the Saturday night’s game against Idaho is $60.

The Not So Obvious: If you’re planning on selling your ticket(s), it’s not likely you’ll be able to dump them at face value. Tickets are currently selling like coldcakes.

The Obvious: The Trojans head coach is Steve Sarkisian heads into his second game of not being the base play caller, having turned over the play calling to offensive coordinator Clay Helton.

The Not So Obvious: By his own admission during the Arkansas State game, Sark was still active in communication with his play calling thoughts to Helton. Perhaps that’s why, even though the final balance between pass and running plays was even at 32 apiece, the offensive play calling appeared uneven with a series of consecutive passes followed by a series of consecutive runs. Perhaps it’s just all part of working out the kinks of the new arrangement.

The Obvious: The head coach of Idaho is third-year head coach Paul Petrino.

The Not So Obvious: Yes, Paul is the brother of famed Louisville head coach Bobby Petrino. Last season under Paul Petrino, Idaho was 1-10, the program’s third straight one-victory season.

The Obvious: The Vandals offense and defense will need to be in top form to stay in it with the Trojans by halftime.

The Not So Obvious: The Vandal offense is lead by QB Matt Linehan, 234-pound running back Elijhaa Penny, and its leading receiver from 2013, Dezmon Epps, who had 79 catches for nearly 1,000 yards that in 2013. Idaho’s defense has a new 3-4 front after allowing more than 460 total yards and 37 points per game a season ago. Linebacker Marc Millan returns after topping the team in tackles (102) and tackles for loss (15.5) in 2014. Punter Austin Rehkow was a 2013 All-American first team punter and also handles the placekicks.

The Not So Obvious: The Trojans have been on SI covers 135 times.

The Obvious: The Trojans currently have one player from Idaho (OLB Don Hill of Timberline HS in Boise).

The Not So Obvious: Idaho features 23 Californians on its roster.

The Obvious: Johnny Nansen is the Trojans running backs and special teams coach.

The Not So Obvious: Nansen spent five seasons at Idaho (2004-08), where he worked with the linebackers the first three seasons and defensive line the last two seasons.

The Obvious: In its history, the Trojans USC has had just two football lettermen

from Idaho, and both came from Boise.

The Not So Obvious: One was 1972 All-America DT/DE John Grant (Capital HS) and the other 1978/1980 fullback Paul DiLulo (Boise High). Grant was a great one on the John McKay’s 1972 national champions.

The Obvious: USC is known as the Trojans.

The Not So Obvious: In 2015, the Idaho offense is averaging 28.0 points per game while the defense is allowing 45.0 points per outing.

The Obvious: Last week against Arkansas State in the Trojans season opener, the USC offensive line allowed five sacks of Cody Kessler in the first half.

The Not So Obvious: You can bet that if Kessler is sacked five times against Idaho, Trojans offensive line coach Bob Connelly will become a focal point along with his linemen. It should be interesting to see the O-line player combinations for Idaho, as the Trojans ready for Stanford next week. To the O-line’s credit last week, they didn’t give up a sack in the second half.

The Obvious: On Saturday night, there will again be special events and recognitions throughout the game.

The Not So Obvious: It’s Joint Forces Day at the Coliseum, with 10,000 members of the Joint Forces provided with tickets to the game in honor of their service. There will also be a pre-game flyover by the United States Air Force during the National Anthem. The Trojans women’s beach volleyball team, which won the 2015 American Volleyball Coaches Association national team championship, will be saluted during the game. Trojans student-athletes who posted a 3.0 grade point average during the 2014-15 year will also be honored (264 from the fall and 305 from the spring among USC’s 550 student-athletes).

The Obvious: And finally, until the Trojans and Idaho met in 2007, it had been nearly 80 years since the one-time Pacific Coast Conference foes had played each other.

The Not So Obvious: The Trojans have won all eight of its meetings against the Vandals, and if the score is what many are predicting comes true, it might be a good idea that the two teams don’t meet for another 80 years.