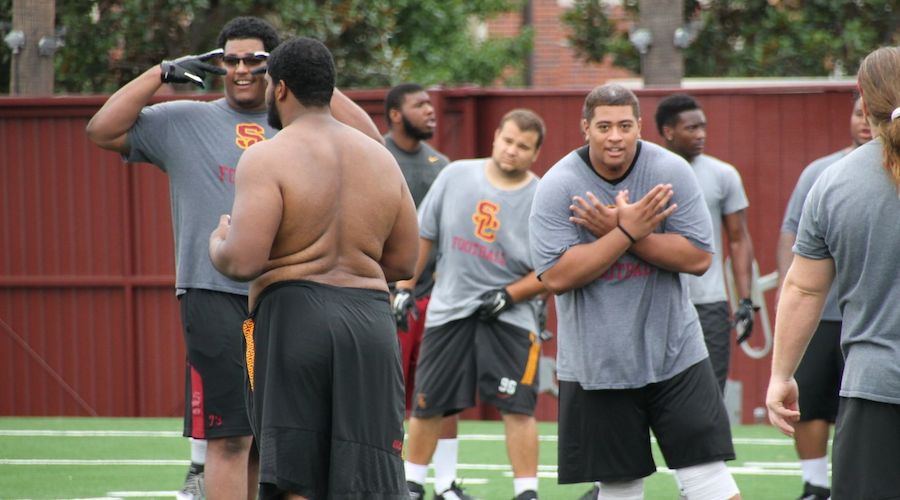 The Obvious: To many outside observers, the USC Trojans under Pete Carroll were more like Hollywood’s team with all the celebrities that would come to the games and practices.

The Not So Obvious: So it was with some amusement this week that Trojans mammoth starting junior offensive tackle Zach Banner participated in a players-run practice wearing Hollywood-style sunglasses (above photo and Banner at the far left).  Okay, so may be they were prescription sunglasses, but in L.A., one never knows.

The Obvious: Speaking of the Hollywood theme, Pac-12 Media Day is next Thursday and Friday at Warner Brothers Studios.

The Not So Obvious: Although Warner Brothers Studios is actually located in Burbank, Trojans second-year head coach Steve Sarkisian, quarterback Cody Kessler, and linebacker Su’a Cravens will be the featured speakers, and knowing that media day is next week is yet another big sign that training camp is about to begin Aug. 8.

The Obvious: True freshman running back Ronald Jones ll is expected to challenge for playing time this season, and he is a legitimate all-the-way runner with exceptional speed.

The Not So Obvious: Jones is listed at 6-foot, 185, but in summer workouts he looks a bit heavier. Perhaps one of the most intriguing training camp storylines will be how Jones performs in some live scrimmages. As a freshman, he figures to get a lot of opportunities in August to show what he has got.

The Not So Obvious: Yet despite his new professional career, there was the Big Cat this week again encouraging his teammates while wearing an “SC” T-shirt. It stresses how much he enjoyed and still enjoys being around his former teammates and the university. It’s refreshing to say the least. There are those that tell you that the Big Cat knew he had to go pro through his head, but his heart has remained a Trojan.

The Obvious: Silas Redd is a former USC tailback that now plays for the Washington Redskins.

The Not So Obvious: So there was Silas recently working the free Hayes Pullard Football Youth Camp at Crenshaw High (Pullard’s alma mater) and hanging with his buddies. Sometimes transferring has a bigger upside than just the playing aspect. When Redd came to SC from Penn State, there were some understandably disappointed and angry folks back in Happy Valley. However, as things turned out, Redd, whose Trojan career was beset with injuries, came out the better not only from a vocational level but a friends-for-life lesson. As they say, “You’re a Trojan for life.”

The Obvious: It looks like maybe the Trojans may be wearing a new fitting of its famed home jerseys in the Coliseum this season.

The Not So Obvious: Yeah, the new jersey’s kind of look the same except for those dark areas around the numbers. The O/NSO will reserve final judgment until they are worn in the Coliseum with the metallic helmets. Our first impression is….here we go again. And again, if it ain’t broke, don’t fix it.

The Obvious: Athlon Sports Magazine is a Sunday insert to many of the nation’s newspapers.

The Not So Obvious: Last Sunday, Athlon Sports Magazine gave its predictions on the top teams in the country. ASM has the Trojans at No. 6 behind (in order) Ohio State, Alabama, Baylor, Auburn, and TCU.

The Obvious: There is little question that Trojans sophomore corner/wide receiver/kick returner Adoree’ Jackson is already one of the nation’s most electrifying and visible players.

The Not So Obvious: In Athlon’s Sports Magazine last Sunday edition, A.J. was called the nation’s “Breakout Star.” Athlon wrote, “An Olympic-caliber long jumper and three-way football star, Jackson is ready to take his game to another level after a freshman year that included three receiving TDs, two kick return TDs and lockdown corner defense on opponents’ top wideouts.” Guess that just about says it all.

The Not So Obvious: In Athlon’s Sports Magazine, Kessler’s odds of winning the Heisman Trophy, which the magazine used from the Las Vegas gambling site Bovada, are 12-1, the same as LSU running back Leonard Fournette, Auburn QB Jeremy Johnson, and Mississippi state QB Dak Prescott. ASM’s choice from the gambling site for winning the Heisman is TCU QB Trevone Boykin at 6-1.

The Obvious: The Trojans are one of the few teams to not have players’ last names on the back of its jerseys.

The Not So Obvious: Penn State will remove the names from the backs of its jerseys beginning this season to pay homage to the history of Nittany Lion football.

The Obvious: According to a Sports Illustrated report, former Trojans Heisman Trophy winning quarterback Matt Leinart will be promoted to in-studio analyst for college football games on Fox.

The Not So Obvious: Former Fox studio host Joel Klatt, the one-time Colorado walk-on, been promoted to lead analyst with play-by-play shrill Gus Johnson on Fox college football coverage. Charles Johnson, who did a wonderful job with Gus Johnson on Pac-12 games, has been promoted to Fox’s NFL coverage, replacing Donovan McNabb, who was replaced due to a DUI violation.

The Not So Obvious: Interestingly enough, Leinart will join former USC defensive line coach Dave Wannstedt, who was at USC from 1983-85 under former Trojans head coach Ted Tollner (1983-86).

The Obvious: A large group of USC fans who are not season ticket holders, are waiting for the announcement when public ticket sales will take place.

The Not So Obvious: For those of you waiting for the opportunity to purchase single-game tickets and are currently season ticket holders, you are currently getting first crack until July 27. However, public sales will commence on July 28, which this coming Tuesday.

The Obvious: And finally, the Newport Beach area of Southern California is renown for its tightknit USC Trojans alumni.

The Not So Obvious: According to the local Orange Coast Daily Pilot, Trojans head coach Steve Sarkisian is now a resident of Newport Beach where his 10-year-old son, Brady, plays in the Newport-Mesa Junior All-America program. Naturally, Brady Sarkisian plays for the Seahawks and the Pete Carroll influence continues.