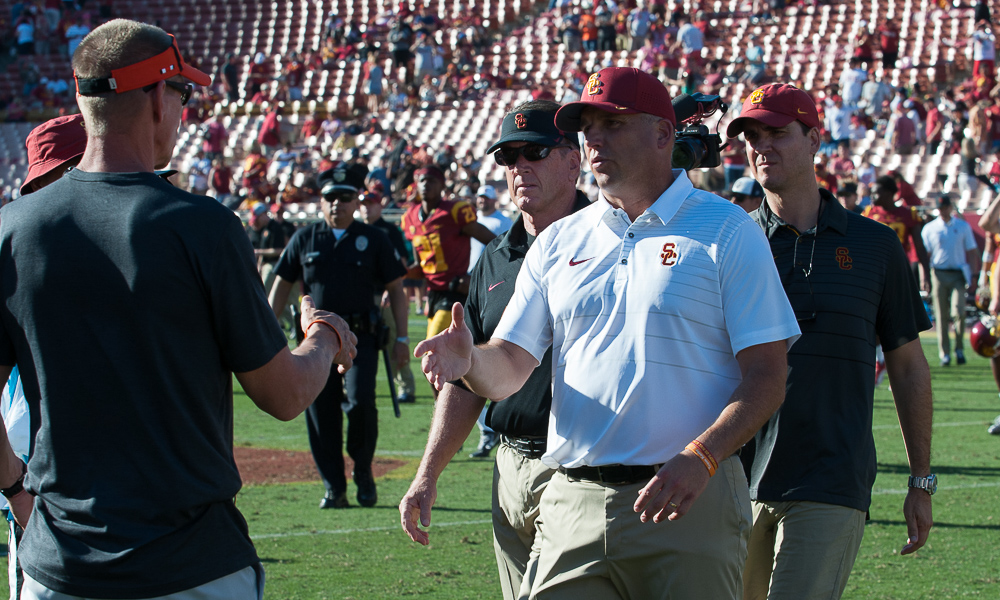 The Not So Obvious: In the recently released Trojans’ football spring media guide, Helton gave his early assessment of how he sees his club, which will be interesting to compare with his comments after the end of the staggered 15-day March-April gridiron exercise.

The Obvious: Clay Helton is optimistic but understands that there’re big holes to fill from the 2017 Pac-12 Champions.

The Not So Obvious: Helton says, “There is talent across the board on our offense, but we have a big challenge after losing a 4,000-yard passer, a 1,500-yard rusher and a 1,100-yard receiver. Our strength offensively is in our numbers. It’ll take all of us to produce another top tier offense like we had last year.”

The Obvious: As it pertains to the quarterback position, Clay Helton says he will take his time in deciding who will eventually replace Sam Darnold.

The Not So Obvious: Helton says, “This is an important time for the quarterback position as far as their education goes, so we will use the spring to educate and not evaluate. We don’t have to name a starter in the spring. After losing a great quarterback like Sam Darnold, we have some talented young quarterbacks who will need to use the spring to take the next step to prepare for the 2018 season.”

The Obvious: There is no lack of confidence that there are solid candidates to replace All-Pac-12 tailback Ronald Jones ll.

The Not So Obvious: Helton says, “Although we lost a great tailback in Ronald, we are very fortunate to have some talented and experienced runners to fill his spot. I look forward to watching the competition develop at this position.”

The Obvious: Clay Helton is excited on his young but talented wide receivers for 2018.

The Not So Obvious: Helton says, “Deontay (Burnett) and Steven (Mitchell) leave some big shoes to fill, but I like the quality and depth of our receiving corps. I loved watching how our young wide receivers grew up last season and performed, as evidenced by the play of Tyler (Vaughns) and Michael (Pittman Jr.). I’m now looking forward to watching how the receivers establish themselves as leaders on our offense.”

The Obvious: The Trojans are fortunate to have a solid group of returning tight ends.

The Not So Obvious: Helton says, “Tyler (Petite) and Daniel (Imatorbhebhe) are not only upperclass veterans, but leaders of our offense. I expect our tight ends to now become an even bigger part of our offensive system.”

The Obvious: There’s general consensus that one of the Trojans’ biggest challenge during the spring is the need to develop offensive line depth.

The Not So Obvious: Helton says, “Returning four starters on the offensive line will be a tremendous advantage for our offense, especially players of the caliber of Toa (Lobendahn), Chris (Brown), Chuma (Edoga) and Andrew (Vorhees). Our challenge this spring will be to develop our younger linemen into productive contributors.”

The Obvious: Last season’s defense was formidable and improved as the season progressed. Clay Helton believes there is reason to be optimistic regarding the 2018 unit.

The Not So Obvious: Helton says, “Our defense can carry our team this year. Defense wins championships, and this is a group that can accomplish that. We have a lot of defensive players who have played a lot of football.”

The Obvious: The Trojans will have some spring challenges trying to fill some big shoes along the defensive line.

The Not So Obvious: Helton says, “It feels like we finally have the numbers we’ve wanted up front. Last year with Rasheem (Green) and Josh (Fatu) leading the way, this group did a tremendous job, helping us lead the nation in sacks, and I look for that to continue this season with returning players like Christian (Rector). The challenge this year is to develop our young defensive linemen and get them into the mix.”

The Obvious: The Trojans appear to be in great shape in terms of talent and depth returning to the outside linebacker positions.

The Not So Obvious: Helton says, “I see a wealth of talent coming off the edge for us this year. The challenge will be replacing Uchenna (Nwosu) and all that he brought to our defense. But a senior leader like Porter (Gustin) can help the younger players and put us in a good position.”

The Obvious: The 2018 inside linebacker positions look strong on the first unit, but again depth needs to be built.

The Not So Obvious: Helton says, “This is a very strong group for us, in experience, depth and the potential of the younger players. Having Cameron (Smith) and John (Houston Jr.) back and the versatility of Jordan (Iosefa) gives us great confidence at this position. It will be important to develop the younger players, starting this spring.”

The Obvious: There are some graduating and discipline holes to be addressed in the secondary, but this is a somewhat seasoned group with some legitimate promise.

The Not So Obvious: Helton says, “This is a veteran, experienced group with a lot of players who have taken a lot of reps, even with Chris (Hawkins) having moved on. With the likes of Marvell (Tell), Iman (Marshall), Ajene (Harris) and Jack (Jones), the goal now is to be one of the best secondaries in the nation. And we must develop the talented young players we have acquired the past two years.”

The Obvious: The Trojans will have the luxury of having some important special team members returning.

The Not So Obvious: Helton says, “Under coach Baxter, we should continue to be very effective in all phases of our special teams. We understand the importance of good special teams play, and we devote a lot of time to this part of the game. Even with Chase (McGrath) and Reid (Budrovich) returning, I expect that the specialists will push each other every day. That kind of competition elevates everyone’s performance.”

The Obvious: And finally,  agree with the coach on his analysis? Clay Helton appears optimistic yet guarded in his early evaluation of his team heading to spring ball.

The Not So Obvious: However, as spring continues into April, it would be expected that some of the pre-spring comments figure to change, and that’s what makes spring ball so potentially fascinating.