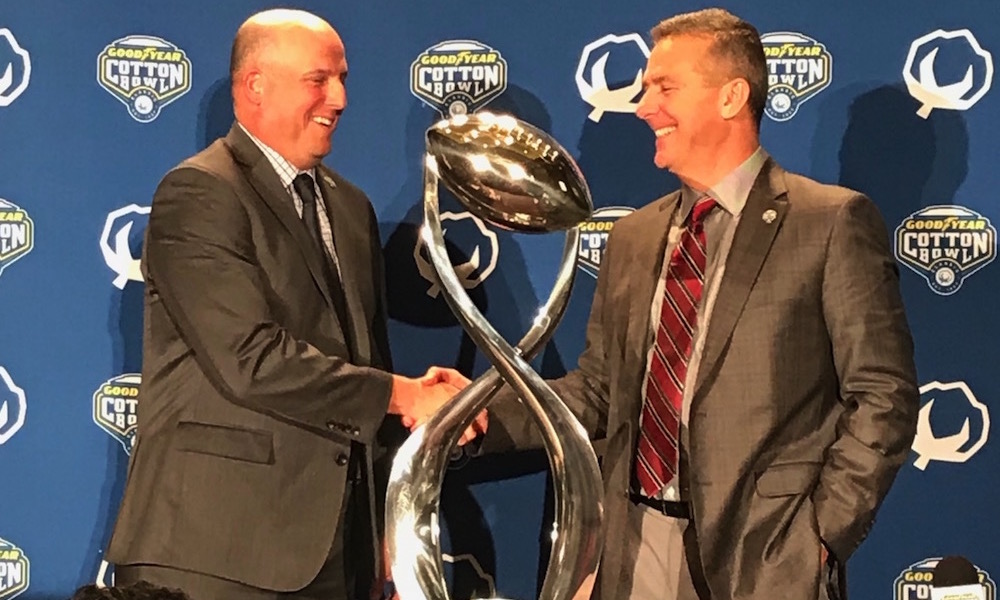 The Obvious: With opulent AT&T Stadium in Arlington, Texas, as the backdrop, two legendary college football programs, the No. 8 USC Trojans (11-2), champions of the Pac-12, and the No. 5 Ohio State Buckeyes (11-2), champions of the Big Ten, will meet in the 82nd Goodyear Cotton Bowl on Friday evening (7:40 p.m. CT/ 5:40 p.m. PT/ESPN). It’s two storied powerhouses that strongly believe they should have been included in the College Football Playoff semi-finals.

The Not So Obvious: All smiles, take it from USC coach Clay Helton and Ohio State coach Urban Meyer (photos above), it may not be the traditional meeting of Pac-12 and Big Ten champions on New Year’s Day in Pasadena, but you won’t hear any complaints from them regarding Friday night’s match-up or from college football fans across the nation. The 82nd Goodyear Cotton Bowl Classic will play host to two conference champions for the first time since 1987 when Ohio State defeated Texas A&M, the Southwest Conference Champion, 28-12. This is Ohio State’s second appearance in the “Classic” after the 1987 Cotton Bowl. As for the Trojans, they are making their second appearance in the Cotton Bowl. Wide receiver Keyshawn Johnson, a member of the Cotton Bowl Hall of Fame, led the Trojans to a 55-14 victory over Texas Tech in the 1995 Cotton Bowl.

The Obvious: Ohio State opened a 7-point favorite to defeat the Trojans.

The Not So Obvious: The Trojans have won the last seven meetings between the two universities, which dates back to the 1974 Rose Bowl. The last time Troy and Ohio State met in the postseason was the 1985 Rose Bowl with the Trojans winning 20-17. It’s also the 24th meeting between the schools (the first since 2009), including the eighth time they’ve faced each other in a bowl (but the first non-Rose Bowl). The Trojans hold a 13-9-1 series edge over Ohio State. The two teams last met at Ohio Stadium on Sept. 12, 2009 when Troy put together a memorable 86-yard drive, capped by tailback Stafon Johnson’s two-yard run with 1:05 to play to secure a 18-15 victory.

The Not So Obvious: The ESPN broadcasters for Friday night will be Bob Wischusen (play-by-play), Brock Huard (analyst) and Allison Williams (sidelines).

The Not So Obvious: The local Ohio State broadcast can be heard on flagship station WBNS (1460 AM/97.1 FM) with Paul Keels (play-by-play), Jim Lachey (analyst), and Matt Andrews (sidelines).

The Obvious: Friday’s Arlington weather forecast calls for morning clouds and afternoon sunshine with a high of 46 and a low of 40 degrees, 76 percent humidity, and 10 percent precipitation.

The Not So Obvious: The real weather report is whether the Trojans are ready for a big game in a big game environment that will strongly confirm or deny their place among the 2017 college gridiron elite. Of upmost interest is whether the Men of Troy are ready for a physical game that could make the Notre Dame game in South Bend look like a rock fight. Ohio State will be the ultimate answer to how good this USC team is for 2017.

Offensively, we’ll see whether the Trojans can even dent an Ohio State defensive line that many call the best in the nation. This will be a major challenge for O-Line coach Neil Callaway and his troops. The Buckeyes’ defense will really test the Trojans, and we’ll find out whether the Trojans offensive line can contain the like of sophomore DE Nick Bosa (6-4, 270), Big Ten Defensive Player of the Year, and senior DL Tyquan Lewis (6-4, 265), a former 2016 Big Ten Defensive Lineman of the Year.

Without question, this will be the toughest defensive front that the Trojans’ offense will have faced. Ohio State head coach Urban Meyer said on Thursday that the best way to deal with the Trojans’ redshirt sophomore All-Pac-12 QB Sam Darnold is to attack him with a violent pass rush. We’ll also see whether the departure of Trojans’ quarterback coach Tyson Helton (now at Tennessee) has an effect in any play-calling changes or exposes Trojans’ offensive coordinator Tee Martin to larger scrutiny. We’ll find out whether All-America junior tailback Ronald Jones ll can make consistent yardage against an Ohio State defense that is full of future NFL performers. As for the Trojans’ receiving corps, we’ll see whether this improved group, led by junior Deontay Burnett, sophomore Michael Pittman Jr., and redshirt freshman Tyler Vaughns, can handle the ultimate challenge of an athletic Ohio State secondary.

Defensively, the Trojans will be facing the most explosive offense they have seen all season. Buckeyes’ head coach Urban Meyer’s attack has so many options, reverses, misdirection, and power plays, it challenges even the best of defenses, and they do it in a spread formation. Adding to the greater Trojans challenge is Buckeyes’ senior quarterback sensation J.T. Barrett (6-2, 220) who is yet another dual-threat quarterback that has historically driven Trojan defensive coordinators crazy. You can bet that Trojans’ DC Clancy Pendergast has been up late burning candles trying to figure out whether he can get his unit to counteract OSU’s highly-skilled offensive talent. To complicate matters, the Buckeyes have a true set of elite running backs in sensational freshman tailback J.K. Dobbins (5-10, 208) and talented redshirt sophomore Mike Weber (5-10, 214). Keep an eye on the Trojans’ defensive front and their ability to neutralize Ohio State’s bruising offensive line led by graduate Rimington Award winning center Billy Price (6-4, 312) and senior tackle Jamarco Jones (6-5, 310). We’ll see whether the Trojans’ front, led by senior All-Pac-12 outside linebacker Uchenna Nwosu, junior All-Pac-12 inside linebacker Cameron Smith, and junior All-Pac-12 defensive end Rasheem Green, can handle OSU’s offensive line assault. And last but not least, there is the question of whether the Trojans’ secondary – mainly the corners – who have been a liability for most of the season, can control a fleet array of Buckeyes receivers. To add to the USC secondary intrigue, sophomore CB Jack Jones (ankle) has been listed as a “game time” decision.

On special teams, the Trojans will have at their disposal two walk-on performers, true freshman placekicker Chase McGrath and junior punter Reid Budrovich, both of whom performed so well during the regular season that they were awarded scholarships for the 2018 season. We’ll see whether this new “scholarship” distinction will provide dividends against such a high-profile opponent in the Buckeyes. As for Ohio State, they have accomplished special teams performers in punter redshirt freshman punter Drue Chrisman, a Ray Guy semi-finalist at 41.4 yards per punt and junior placekicker Sean Nuernberger, who is 16-of-20 on field goal attempts this season and has converted 174 consecutive extra points in his OSU career.

The Obvious: The 2017 Trojans’ offense averages 34.54 points per game while the Ohio State defense is allowing 19.9 points per outing.

The Obvious: Clay Helton is in his second full season as the Trojans’ head coach.

The Not So Obvious: Assessing Ohio State, Helton says, “I think they’re a complete football team. You think about defensively only giving up 19 points a game, about 290 yards a game. Then you look offensively, basically scoring 42 points a game, have an unbelievable quarterback in J.T. (Barrett) that can both run athletically over 700 yards rushing, 35 touchdown passes, 3,000 yards passing. He’s got (tailback) J.K. (Dobbins) behind him, Mike Weber behind him, about six wide-outs that are as good as anybody in the country. This is a complete football team, in my opinion, that’s coached by a guy that’s a legend in our game, in Coach Meyer. So, this will be our biggest challenge of the year. It’s by far the best team that we have played, and when you watch them on tape, the most complete team. And we look forward to the challenge.”

The Obvious: Trojans’ quarterback Sam Darnold is the Trojans’ major key to victory on offense.

The Not So Obvious: Asked about the intricate Ohio State defense, Darnold says, “They disguise really well. You’ll see them in some of their two-out coverages, on the snap their safeties will rock and roll into one-high, and they’ll come down and bring someone off the edge. It’s something you can prepare for, but at the same time it’s going to be hard. I really have to do a good job post-snap and understanding where the defense is and glue into some tendencies of how their linebackers might give up the coverage. They like to bring different kinds of pressure, but at the same time they just rush four because they have a great defensive line. Four guys and the guys their rotate are all NFL players.”

The Not So Obvious: Asked about defending the Trojans’ offense, Bosa said, “We’re going to have to help out our DBs and our linebackers because they have a really good running back (Ronald Jones ll). Definitely one of the best we’ve played right up there with (Penn State’s) Saquon Barkley. We’re not taking any of them lightly. Obviously, the quarterback’s going to be a top pick. Their skill positions are going to be really good, some of the best we’ve seen.”

The Obvious: While Sam Darnold has been on the Buckeyes’ defensive minds all week, it’s Trojans tailback Ronald Jones ll who gotten the attention of Urban Meyer and his defensive coordinator Greg Schiano.

The Not So Obvious: Asked about Ronald Jones, Schiano said, “I think the running back (Ronald Jones) is phenomenal, not just fast, strong. He has incredible feel right before he gets tackled. Not a lot of kids that you see in college football do this. He kind of takes what you call a raised step right before he gets hit and really delivers a blow, as opposed to a guy just continuing to run. That is something that I don’t know if it’s coached or not. You don’t see a lot of guys that are able to do that. I think it’s kind of a gift.”

The Obvious: And finally, the Trojans have no players on its roster from the state of Ohio.