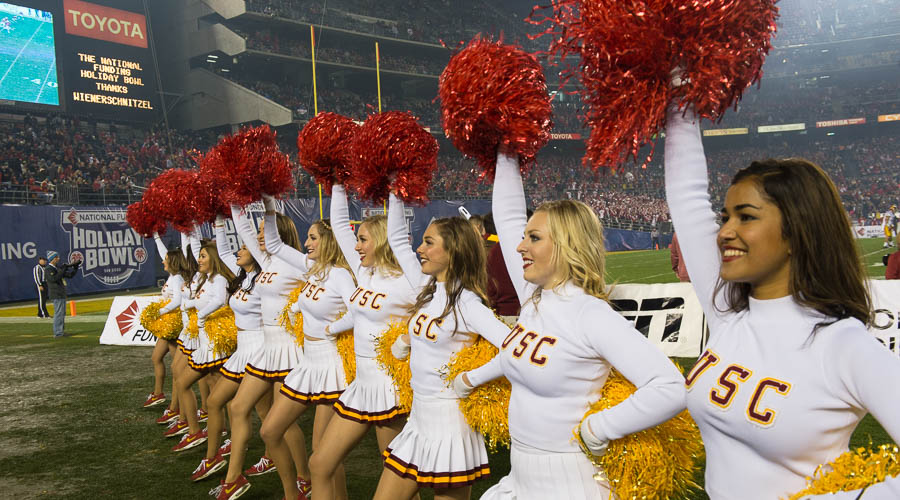 The Obvious: There has been a lot of discussion and “disappointment” that the fullback position in the USC offense is an extinct species.

The Not So Obvious: According to a story filed by WeAreSC.com publisher Garry Paskwietz at a recent San Gabriel Valley Trojan Club meeting, one of the guest speakers at the club meeting was new quarterbacks coach and passing game coordinator Tyson Helton, younger brother of Clay, and he said there is fullback plans in the future.

The Obvious: If the Trojans are going to use a fullback, they’ll have to go recruit some, a reality acknowledged by Tyson Helton.

The Not So Obvious: Helton said, “Right now we don’t have one, but we have tight ends who can play hybrid roles, where they can live in the fullback’s world and give defenses fits. If we find a fullback who can do it, we will do it. We will eventually have a fullback again.”

The Obvious: The Trojans coaching staff and Clay Helton is on record as saying he’d like to model his hybrid “H” back the way former fullback/tight end Rhett Ellison was used back in the day.

The Not So Obvious: If the Trojans are going to use tight ends as multiple position players, the O/NSO will tell you one thing, the more we watch incoming freshman tight end Cary Angeline the more we are impressed. Yeah, Cary is 6-foot-7 and around 230 pounds with plenty of room to put on weight and his blocking is not quite at the domination level, but when it comes to receiving skills, the kid certainly looks good on film and is a nightmare mismatch for shorter defensive backs. FYI, Angeline also possesses a mean straight-arm for would-be tacklers, as well.

The Obvious: The good news, according to Tyson Helton, is that Trojans practices will be open to the public.

The Not So Obvious: The bad news is that Helton didn’t specifically say whether those open practices meant spring and/or fall. The educated guess here is that spring will be open, and that at least the first couple of weeks of training camp in August will be open, as well.

The Not So Obvious: At the San Gabriel Valley Trojans Club meeting, Tyson Helton said of the influence of Callaway, “When those five OL show up at the park, they are going to be mad at the world and ready to hurt the men in front of them.”

The Obvious: Ron Yary, the Trojans only Outland Trophy winner, may be the greatest offensive tackle ever to play at USC.

The Not So Obvious: When Yary played, he said he would think before every game how he bad he was going to hurt the defensive player in front of him. And he did. Trojans fans should, therefore, be excited to hear that Neil Callaway will teach the art of physical offensive line domination and no one will be happier than one Ron Yary.

The Obvious: The Pac-12 bad news is that Stanford All-America running back Christian McCaffrey returns for another season, and the Trojans will have to face this already all-time Pac-12 running back at Stanford on Sept. 17.

The Not So Obvious: The good news, however, is that Christian McCaffrey’s brother, Dylan McCaffrey, ranked the No. 1 pocket passer in the country for the Class of 2017, has announced he has committed to Jim Harbaugh and Michigan. FYI, according to reports, Dylan wasn’t offered by Stanford head coach David Shaw. Hmmm.

The Obvious: Former Trojans Class of 2017 wide receiver commit Amari Rodgers (Knoxville, Tenn./Catholic), the son of Trojans offensive coordinator Tee Martin, has announced that he has pledged to Clemson.

The Not So Obvious: Rodgers says that he wants to be his own man and doesn’t want to be referred to as Tee Martin’s son. Sometimes that’s the right way to go and sometimes it isn’t. It worked well for a young USC receiver named J.K. McKay, the son of legendary USC football John McKay. J.K. played three seasons with the Trojans under his famous father.

The Obvious: J.K. McKay is one of the best ever receivers to play at USC and not because he is John McKay’s son.

The Not So Obvious: When it came to recruiting his own son, the elder McKay is famous for saying that he had a big recruiting advantage in recruiting J.K.; he slept with the recruit’s mother.

The Obvious: According to reports, Austin Thomas, who has been given big credit for helping LSU gather a Top 5 recruiting class for 2016, is reportedly returning to USC as a football administrator.

The Not So Obvious: Although Thomas was with the Trojans back in 2010 under Lane Kiffin before deciding to expand his resume, he has been honored as the top non-coaching administrator in college football. Although Johnny Nansen is the Trojans recruiting coordinator, the addition of Austin Thomas means there is probably going to be different responsibilities for Nansen, which isn’t necessarily a bad thing.

The Obvious: One of the greatest recruiters in the history of USC football is former Trojans recruiting coordinator and defensive line coach Ed Orgeron.

The Not So Obvious: Orgeron, now at LSU, gives high praise to Austin Thomas for his recruiting efforts by saying, “Austin is a great evaluator. He spends countless hours devouring film and is highly organized when gathering information on a player. From talent identification and evaluation, to connecting with the players and managing all of their visits, Austin runs all of it. He’s the main reason for our (LSU) recruiting success.”

The Obvious: And finally, the Trojans will have a preferred walk-on quarterback in 2016 and his name is Holden Thomas (6-5 193).

The Not So Obvious: Never heard of the kid? Well, he’s from the local Los Angeles Brentwood Eagles. In a tweet sent out, Thomas wrote, “Couldn’t be happier to announce my commitment to USC. I want to thank God, my family, and my coaches for helping achieve my goal of playing D1 football. It has been a crazy path, but I am so excited to spend the next 4 years of my life at USC.” Well, Holden, your dream comes true, but watch-out, the nightmares begin when those first-team D1 linemen come calling for your skin as practice fodder.