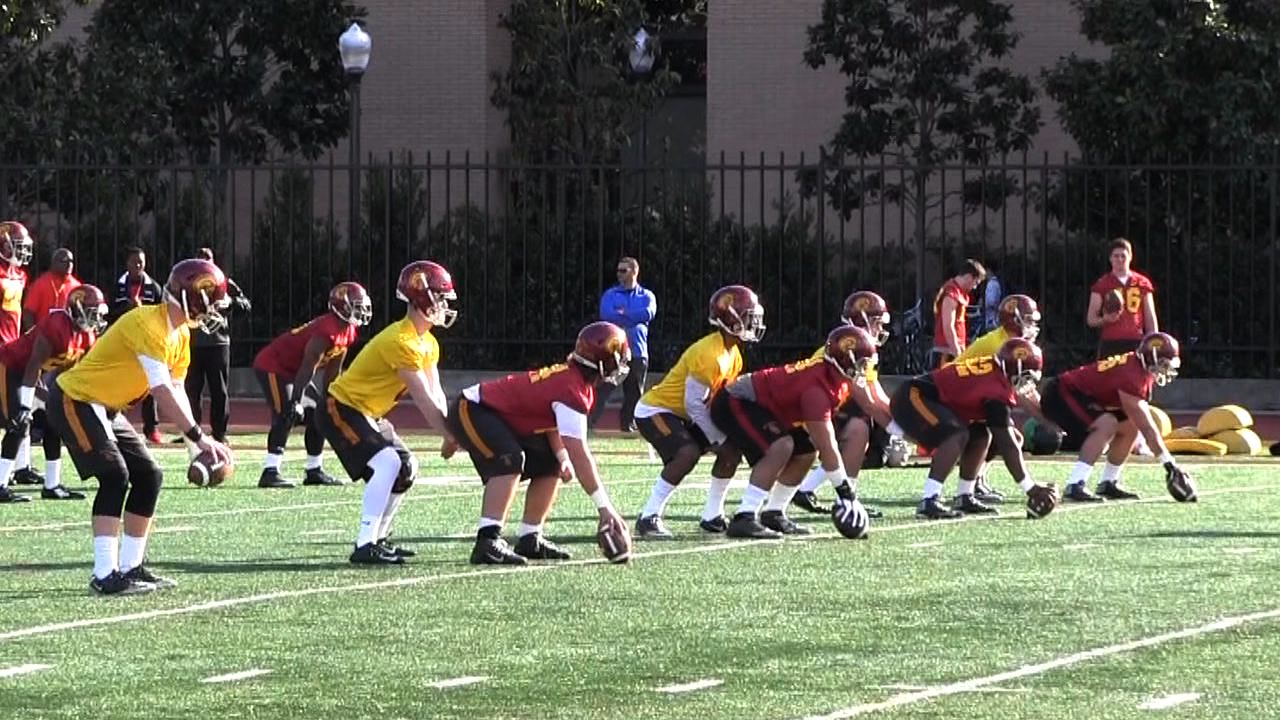 The Obvious (UPDATED): The USC Trojans will complete their first full week of spring practice on Saturday with a time adjusted 12:20 p.m. start, which is still open to the general public in Loker Stadium.

The Not So Obvious: The earlier announcement of Saturday’s practice was a 10:20 a.m. start after earlier being slotted for 11 a.m. With the post noontime beginning of practice, the conclusion is now estimated at 2 p.m., so it might change some lunch plans. However,there’s still plenty of time afterward to eat a French dip sandwich at Philippe’s or tickle those taste buds at The Pantry.

The Obvious: The bad news in the first week is that starting senior inside linebacker Anthony Sarao is out of spring ball with a small crack in his foot.

The Not So Obvious: It means that senior Lamar Dawson and junior Michael Hutchings, and don’t discount sophomore Olajuwon Tucker, are next men up, and it could prove to be quite a competition in the impression department.

The Obvious: The Trojans are currently practicing in Loker Stadium, which also is the venue for the USC track team.

The Not So Obvious: Since Howard Jones/Brian Kennedy Fields are being renovated, spring practice is being conducted on Cromwell Field. Spectators and media enter in separate entrances, as the media has a designated area at the 50-yard line, although the general public has great views of the field, too. A word to the wise, if you’re coming to view practice, the O/NSO would strongly suggest not only bringing binoculars but a nice, comfortable cushion, as well. The viewing benches are metal and will test your endurance. And don’t forget some bottled water and sunscreen.

The Obvious: Although NCAA sanctions are a thing of the past, there’s enforced and tight security inside Loker Stadium.

The Not So Obvious: A constant theme during practice was the amount of times security politely and not so politely asked fans not to use their cell phones and no text messaging. Other than that, fans could pretty much do what they wanted and most were having a good time.

The Obvious: Pete Arbogast is the Trojans Hall of Fame football radio broadcaster.

The Not So Obvious: After Trojans all-star sophomore corner Adoree’ Jackson made a fine defensive play on a pass in his area, Old Golden Throat commented, “Why throw at A.J. – ever!” Well, he’s got a point there. Later in the practice, Jackson made another standout play, and it seemed everybody in the stands was wondering why go there.

The Not So Obvious: Trojans fans should thank their lucky starts that Helton is back. Even on the first day of spring ball, fans were reminded just how outstanding Clay is not only as a teacher but the enthusiasm he brings to practice.

The Not So Obvious: If something unfortunate should happen along the way to Kessler, be assured that Mad Max can get the job done. In fact, he’s still the best quarterback at throwing the deep ball, and he demonstrated it again on the first day of spring practice with a long completion to sophomore wide receiver sensation JuJu Smith.

The Obvious: Big Cody Temple (6-2, 310), a senior, is currently the Trojans starting nose tackle in relief of senior starter Antwaun Woods, who is recuperating from a chest injury.

The Not So Obvious: Although it’s early, this is probably the healthiest Temple has looked in quite some time. The Big Block from Bakersfield is finally ready for a spring in which he is healthy and able to compete.

The Obvious: Pat Haden is the USC Trojans athletic director.

The Not So Obvious: Perhaps the early upset of spring ball was that on the first day of spring ball on Tuesday, Haden appeared without cardinal pants but was wearing cardinal and gold sunglasses.

The Obvious: Senior Soma Vainuku has been recognized as one of the great special teams players in the Pac-12.

The Not So Obvious: For quite some time, Trojans fans have wanted to see Soma carry the ball like the former high school tailback that he was at Eureka (Calif.) High. Because of the lack of bodies at tailback, Vainuku has had some carries at tailback early-on. Soma demonstrated once again he hasn’t forgotten how to tote the pigskin.

The Obvious: Because of the foot injury to senior starting inside linebacker Anthony Sarao, senior Lamar Dawson is getting a shot at regaining his linebacker position.

The Not So Obvious: Although Dawson thus far hasn’t lived up to his famous No. 55, he showed he has recovered from his devastation knee injury and look pretty good this week. One person who really thought Lamar looked outstanding was head coach Steve Sarkisian and that certainly is a person you want in your comeback corner.

The Obvious: Sophomore tight end Bryce Dixon isn’t currently with the team because of a student conduct issue.

The Not So Obvious: Rumors regarding Dixon were swirling around this week on campus like the tornedo in the Wizard of Oz. He’s gone, no he isn’t. He’s been dismissed, no he hasn’t. If the O/NSO were a betting man, it says here that things appear more tenuous than positive for the moment, and now we know why Steve Sarkisian kept insisting heading into spring ball that one of the incoming superstar freshmen linebackers, Porter Gustin or Osa Masina, might get a shot at tight end.

The Obvious: Malik Dorton is a redshirt freshman defensive end.

The Not So Obvious: Well, young No. 44, the former Bellflower St. John Bosco stud, certainly didn’t waste any time on the first day of spring ball batting down two passes. If you want some early attention from the defensive coaches, batting down passes certainly is an attention getting device.

The Obvious: And finally, one of the criticisms last season of defensive coordinator Justin Wilcox was a perceived lack of creativity when it came to blitzes.

The Not So Obvious: It didn’t take long on the first day for Wilcox to order up a safety blitz as junior Leon McQuay lll came crashing in from the left side, which caused a hurry by the Trojans quarterback. Don’t be surprised if more blitzes are in the offering.