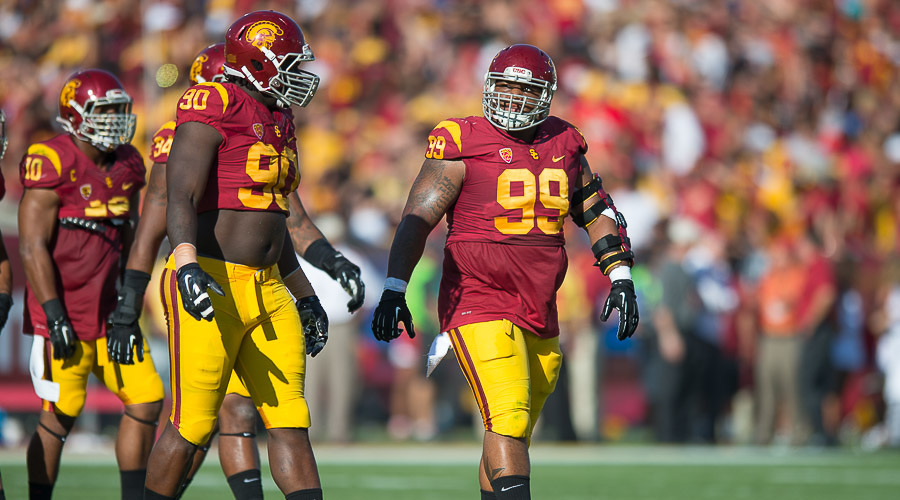 The Obvious: The Trojans defensive line coach Chris Wilson continues to search for a new starting nose tackle for the National University Holiday Bowl after junior starting nose tackle Antwaun Woods went under the knife this week after suffering a pectoral muscle injury.

The Not So Obvious: With Woods missing the National University Holiday Bowl, it means that Delvon Simmons, Claude Pelon, Cody Temple, or even possibly Leonard Williams could be next man up on the Trojans defensive frontline. With Nebraska poised to test the Trojans defense anyway with AP second-team All-America tailback Ameer Abdullah (1,523 yards), you can be sure the Huskers will test whomever it is at nose tackle sooner rather than later.

The Obvious: Social media can be used for managed or unmanaged information.

The Not So Obvious: Antwaun Woods was his own sports information director by sending out an Instagram showing him after his surgery. In bed, tubes attached, and flashing the “Fight On” sign, Antwaun may have a future in photojournalism.

The Not So Obvious: Some might have gone with junior quarterback Cody Kessler, so the O/NSO wondered if co-MVPs might have been in order…unless that wasn’t a selection option.

The Obvious: Judging by the response, one gets the impression that Trojans fans are very receptive to playing in the 37th National University Holiday Bowl in San Diego on Dec. 27.

The Not So Obvious: Perhaps one of the bigger allures for this season’s Holiday Bowl is the fact that the game is being played on a Saturday, as opposed to its traditional weekday.

The Obvious: There is a groundswell of Trojans fans trying to find tickets for the Holiday Bowl.

The Not So Obvious: The O/NSO has actually been contacted by a number of fans and alumni wanting to know if we knew somebody trying to sell game tickets. These Trojans fans were adamant, however, about sitting in USC sections and not with The Big Red of Nebraska. Do you blame them?

The Obvious: The Holiday Bowl is being played two days after Christmas on Dec. 27.

The Not So Obvious: The O/NSO knows a number of fans who are making the Holiday Bowl a family Christmas/Chanukah present for their families and are making extensive plans for a three-day weekend in San Diego.

The Obvious: One of the highlights of the Rose Bowl Game is obviously the preceding Rose Parade.

The Not So Obvious: The Holiday Bowl, too, as its own parade on Friday, Dec. 26th, called the Port of San Diego Big Bay Balloon Parade, which bills itself as the “America’s largest balloon parade.” The parade goes through the scenic bayside streets of downtown San Diego. The parade starts at 3 p.m.

The Obvious: While the Rose Parade concentrates on magnificent flowered floats, San Diego’s Port of San Diego Big Bay Balloon Parade is more like the Macy Days’ Parade in New York, which has those gigantic character balloons.

The Not So Obvious: The Port of San Diego Big Bay Balloon Parade also brings together marching bands, floats, drill teams, and a procession of enormous balloons-“more than any other parade.” Over 100,000 street-side spectators are expected to enjoy the parade along with a nationwide television audience.

The Obvious: Like the Rose Parade, fans can pre-purchase tickets for grandstand viewing.

The Not So Obvious: Not nearly as expensive as the Rose Parade, folks can purchase grandstand seating for $20. However, there is no assigned seating in the grandstands. A ticket guarantees you a seat, but the seats are first-come, first-served.

The Obvious: Both teams are expected to arrive in San Diego on Tuesday, Dec. 23.

The Obvious: As is general practice, the media is not housed at either team hotel.

The Not So Obvious: The media headquarters will be at The Omni Hotel. You might be familiar with this venue. It’s the hotel that has a direct bridge into the San Diego Padres Petco Park.

The Obvious: Like many bowl games, the Holiday Bowl has some traditions of its own.

The Not So Obvious: San Diego, being a military area, has its “Big Flag,” which is one of the largest ceremonial American flags in the country. It measures 100 by 50 yards, which is not coincidentally the size of the Qualcomm Stadium football field.

The Obvious: It’s a tradition for many sporting events to use a “Big Flag” for the National Anthem.

The Not So Obvious: The San Diego “Big Flag” has also been used at Super Bowls, the MLB World Series, and numerous NFL, NCAA, and other Major League Baseball events.

The Not So Obvious: The O/NSO also highly recommends the Cabrillo National Monument located in Point Loma. The facility is named after Juan Rodriguez Cabrillo. Climbing out of his boat and onto shore in 1542, Cabrillo stepped into history as the first European to set foot on what is now the West Coast of the United States.

The Obvious: One of the highlights of the Cabrillo National Monument is the “Point Loma Lighthouse.”

The Not So Obvious: Did you know that the “Old Point Loma Lighthouse” at the Cabrillo National Monument was one of the first lighthouses on the West Coast?

The Obvious: This will be the 37th annual Holiday Bowl.

The Not So Obvious: The first Holiday Bowl was played in 1978, featuring Navy against BYU. For the record, Navy topped BYU 23-16.

The Not So Obvious: FYI, the last Pac-12 victory in a Holiday Bowl was a Washington 19-7 victory over Nebraska. And the coach of Washington? Correct, current Trojans head coach Steve Sarkisian.