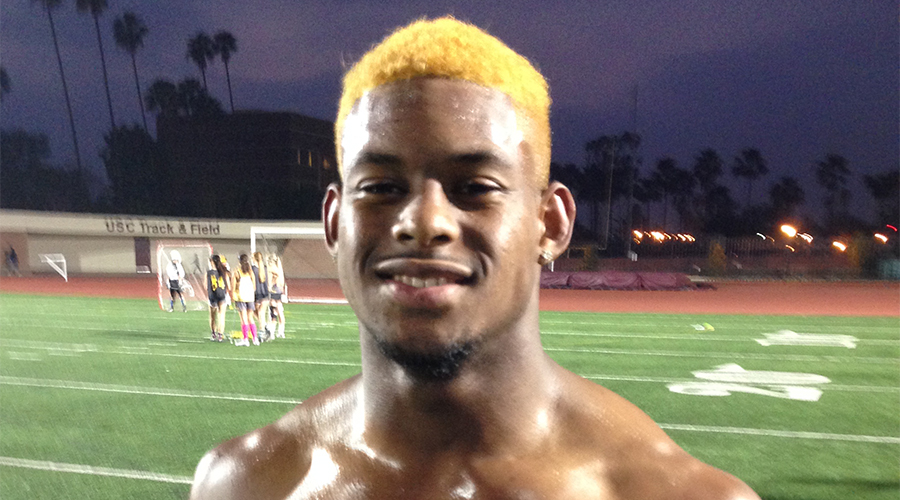 The Obvious: The Trojans learned Friday morning that linebacker Osa Masina (Salt Lake City, Utah/Brighton), the No. 1 prospect in Utah, has committed to the Men of Troy.

The Not So Obvious: Masina (6-4, 233) is considered one of the “Big 5” recruits targeted by the Trojans, which could lead to a top-rated national recruiting class. The other four dominoes, of course, include linebacker John Houston Jr. (Gardena, Calif./Serra), defensive end Rasheem Green (Gardena, Calif./Serra), LB/DE Porter Gustin (Salem, Utah/Salem Hills), and DB Iman Marshall (Long Beach, Calif./Poly). Nothing in recruiting is for sure until the LOI is faxed, but you have to like the Trojans chances the remaining “Big 4.” The next domino? The O/NSO predicts… Porter Gustin?

The Obvious: The Trojans recruiting class of 2015 is a fluid situation.

The Not So Obvious: In case you haven’t heard, wide receiver Tristan Payton (Jacksonville, Fla./First Coast), sent out a tweet on Friday that he has withdrawn his Trojans commitment. Not a shock, but if the Trojans are to land the remaining “Big 4,” there has to be some decommitments, or gray/blue shirt rearrangements. The O/NSO says you can bet the Stanford farm the Trojan will have enough rides for the remaining “Big 4.”

The Not So Obvious: If you’re looking for a real feel good story, the hiring of the former Trojans defensive end great, who had to retire from pro football in 2009 after being diagnosed with leukemia in 2008, is a wonderful one. Most recently the assistant strength and conditioning coach at Pittsburgh, his return to Troy is a big positive both in the strength and conditioning area,

The Obvious: Kenechi Udeze knows what it takes not only to be an NFL top draft pick but a national champion.

The Not So Obvious: If you don’t recall, Kenechi came to Troy as an out-of-shape and undefined freshman body and sculptured it into physical specimen by his junior season. He will set the example for Trojans currently in the program and those incoming freshmen.

The Obvious: Kenechi Udeze was another Ed Orgeron “find” when Udeze was coming out of Los Angeles Verbum Dei High.

The Not So Obvious: Orgeron not only raised Kenechi’s game, but former Trojans strength and conditioning guru Chris Carlisle, now with the Seattle Seahawks, helped remake Udeze’s body.

The Obvious: Kenechi Udeze is a former No. 1 draft pick of the Minnesota Vikings.

The Not So Obvious: For the record, Kenechi was taken in the first round (21st pick) as a junior and played with the Vikings from 2004-08.

The Obvious: When recruiting, one of the biggest sells for a Trojans prospect is that once you join the cardinal and told you’re part of the Trojans family for life.

The Not So Obvious: Certainly from a football standpoint that is true for Kenechi Udeze. He got his start in the area of strength and conditioning from Pete Carroll and the Seahawks and then was a University of Washington S&C assistant under Steve Sarkisian, who was then the head coach at Washington. Welcome home, No. 94.

The Obvious: The Trojans have also hired Nu’u Tafisi as an assistant strength and conditioning coach.

The Not So Obvious: For those that have not heard of Nu’u or think that they may have, Tafisi played defensive end for the Seattle Seahawks (that connection again) and played his college ball at Cal. Tafisi attended East High in Salt Lake City, Utah, and played JC ball at Mt SAC. FYI, he was also a second-team All-Pac-10 selection during his time in Berkeley and was awarded the prestigious Joe Roth Award for courage, attitude, and sportsmanship his senior season.

The Obvious: The Trojans have offered a scholarship to Los Angeles Salesian defensive lineman Kevin Scott (6-5, 280) as part of the class of 2015.

The Not So Obvious: Given the fact that there are currently less scholarships available than scholarships already offered, the O/NSO expects a lot of movement from now until signing day. One could deduce that either the Trojans want to add another defensive lineman or they know something about status of a current commit or current recruits and it’s all on the hush-hush.

The Not So Obvious: And this last weekend the Trojans hosted all-world Gardena (Calif.) Serra High defensive lineman Rasheem Green, who is very high on the Trojans.

The Obvious: Joe Barry is a former Trojans linebacker as well as a former linebacker coach for his alma mater.

The Not So Obvious: There are many in Trojans circles that would have loved to have seen Joe Barry remain on the Lane Kiffin staff, but there was a falling out and Barry moved on to the San Diego Chargers. Barry has since made headlines by moving on now to be defensive coordinator with the Washington Redskins. The O/NSO would have loved to have seen Barry remain a Trojan, but that was also true of former Trojans running back coach Kennedy Polamalu and defensive line coach Ed Orgeron.

The Obvious: Standout wide receiver JuJu Smith (above photo) has a new hair color and displayed it at a recent throwing session.

The Not So Obvious: The new hair color looks like part of the Trojans colors as in the gold. The O/NSO thinks JuJu could have gotten some cardinal color in there if had so desired. It’s all done in good fun, so what’s wrong with being a USC Trojan and wearing the school colors in one’s hair?

The Not So Obvious: The Trojans Bookstore will be again selling No. 6 jerseys to honor Kessler. However, you can save a lot of money if you just retained your Mark Sanchez jersey, which was also No. 6 during his playing days at Troy.

The Obvious: The Trojans were hoping to get an official recruiting visit from Georgia defensive tackle commit Trenton Thompson (Albany, Georgia/Westover), but it appears he is staying with his Georgia commitment.

The Not So Obvious: Thompson has been selected as the 2014 Maxwell Football Club’s National High School Player of the Year.

The Obvious: Ted Miller is a respected ESPN.com Pac-12 columnist and analyst.

The Not So Obvious: Miller points out one of the more perplexing problems that needs to be addressed during the Trojans off-season. The Trojans were outscored 86-72 in the fourth quarter of games in 2014. Only Colorado scored fewer points in the final quarter than the Men of Troy.

The Obvious: Jim Harbaugh is the new head coach at the University of Michigan.

The Not So Obvious: Ann Arbor (Mich.) Skyline linebacker Daelin Hayes is a 2016 Trojans commitment. Hayes is rated by many as the top player in Michigan for his class, and you can bet this will be a renewed recruiting war between Harbaugh and his rebuilding Michigan program and Steve Sarkisian and his continuing restocking of his Trojans program.

The Not So Obvious: While Carroll will be facing a team that once fired him some 15 years ago, don’t feel too sorry for the Pats. Having Bill Belichick isn’t exactly a consolation prize as a head coach.

The Obvious: And finally, the Trojans have started their off-season throwing sessions.

The Not So Obvious: Apparently quarterback Max Browne is taking the volunteer passing sessions seriously, as he’s wearing what appears to be shoulder pads without a jersey. Hey, you wear pads in a game, right?