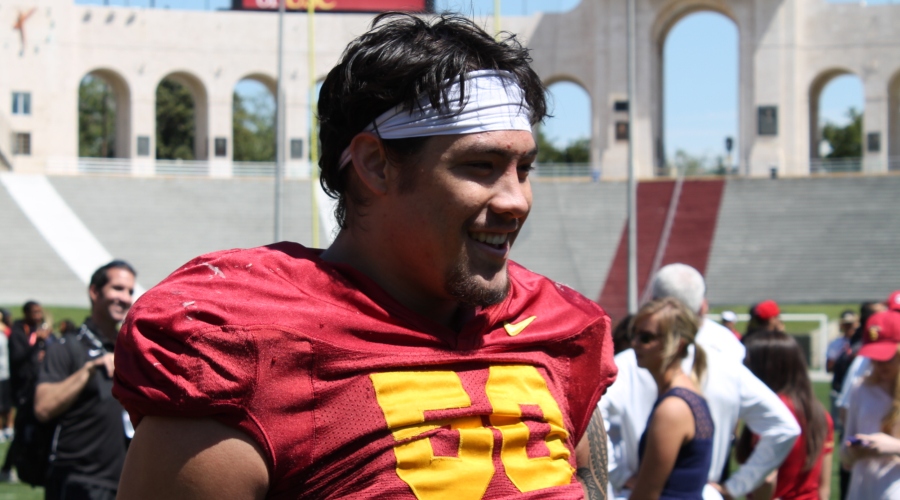 The Obvious: Next week will begin the usual decision-making trepidation for Thursday night’s USC home game (6 p.m. PT/Coliseum) against Washington. “Should I take off Thursday and tailgate the day away but go to work on Friday” or “Should I work on Thursday, get off early and attend the game and take Friday off?”

The Not So Obvious: Well, perhaps the correct answer is to take both days off and make it a four-day weekend. If you do, make sure you thank Pac-12 commissioner Larry Scott for allowing you to make such a wonderful opportunity. Anyone for a fourth straight Thursday night game next season?

The Obvious: With a bye week, there will be no Trojans football games on television.

The Not So Obvious: However, there will be a number Pac-12 games on the tube this weekend. As a public service, the O/NSO presents a listing of this weekend’s games:

The Obvious: A bye week has allowed the Trojans coaching staff to move players around and see what the future might be in the bigger picture.

The Not So Obvious: Two of those experimental moves were on display this week. Starting guard Toa Lobendahn (above photo) took some snaps at center while running back Dominic Davis saw some action at wide receiver. The school of thought on Lobendahn is that he would be a leading starting center contender after the season with senior center Max Tuerk departing to the NFL. With all the wide receiver the Trojans possess now and in the future, the Davis experiment is a little more intriguing.

The Obvious: Carson Palmer is a former Heisman Trophy winning quarterback for the USC Trojans.

The Not So Obvious: Do yourself a favor and pickup this week’s Sports Illustrated, which features an outstanding article by Austin Murphy on the Trojans former superstar quarterback. The story revolves around Carson’s second serious knee injury and how he has come back better than ever for the Arizona Cardinals. Need proof? The Cardinals offense is currently averaging 42 points per game.

The Obvious: Steve Sarkisian and his staff have taken the bye week to scour the local and national landscape in a big recruiting push.

The Not So Obvious: Sark and his crew have been on the recruiting attack the last two days, and the Trojans leader said the last two recruiting days of the week “would be fun for us.”

The Obvious: Even though the Trojans appears to have made a stride or two on defense against Arizona State, head coach Steve Sarkisian is still guarded in his evaluation of his defense.

The Not So Obvious: To emphasize his take on Justin Wilcox’s defense, this week Sark said, “We’re still a work in progress.” That’s coach-speak for we’ve got a long way to go. The truth is the Trojans will soon get the acid test in facing physical teams like Notre Dame and Utah back-to-back. After those outings, it should be crystal clear on what to make of this defense if you haven’t already.

The Obvious: The Trojans have an explosive offense, and most teams will try and keep it on the sidelines through ball control by their own offense.

The Not So Obvious: The Trojans explosive offense, which averages 46 points per game, is ranked No. 2 in the Pac-12 behind No. 1 Arizona (48.2 ppg.). However, when it comes to ball control against opponent defenses, the Trojans are ranked last in the Pac-12 in time of possession (24.33 min.). The conference team with the best time of possession? Stanford, which ranks No. 1 with an average of 34.26 minutes per game.

The Obvious: Most teams will probably try and follow the Stanford offensive plan to thwart a very suspect USC defense.

The Not So Obvious: The Trojans questionable defense, especially in the front 7, is allowing 17.5 ppg., which ranks No. 3 in the Pac-12 behind Washington (15.8) and Colorado (16.5). Of course, a lot of the current allusion of defensive dominance is coming at the expense of earlier weak opponents, or have you already forgotten teams like Arkansas State and Idaho?

The Obvious: One of the accurate barometers of judging a defense is how many yards do opponents get a game.

The Obvious: As expected, the Trojans offense seems to roll up yardage at will.

The Not So Obvious: The Trojans are averaging 532 total offensive yards per game, which ranks No. 3 in the conference. The Pac-12 leader is Arizona (552 yds.).

The Obvious: As the season continues to unfold, the number and yardage for penalties is starting to become center stage.

The Obvious: The Trojan Marching Band’s biennial trip to the Midwest this year will mark the 22nd consecutive time every single band member has been taken to Notre Dame for the historic rivalry game with the Irish.

The Not So Obvious: Taking the TMB back to Notre Dame for the Notre Dame Weekender is a 42-year tradition, and the TMB still could use a little help in trying not to leave somebody back in Los Angeles. This season, over 300 band members are expected to be part of the entourage back to Chicago and on to South Bend. The USC Band/Notre Dame Travel Fund is essential to raising the $250,000 required to take every member (and their instruments) on the road. The O/NSO strongly encourages you to make a donation, so that the TMB will be at full strength on Oct. 16.

The Obvious: It takes some real cardinal and gold pride to help make financial donations to support the Trojans Marching Bands efforts to attend the Notre Dame Weekender.

The Not So Obvious: This far, the Trojans Marching Band has been supported on the Notre Dame Weekender by over 1,000 loyal fans, and the band has raised 50% of the funds needed. By making a donation as a supporter of the USC Band/Notre Dame Travel Fund, fans will receive the commemorative pin with a membership of $100. For those of you wishing to make a contribution, please go to: https://giveto.usc.edu/?fundid=9319716814&appealcode=undefined&buttongen=1&utm_source=USCTMBNDTF+Appeal+2015&utm_campaign=USCTMBNDTF+Appeal&utm_medium=email

The Obvious: And finally, during this week’s bye, Trojans standout sophomore wide receiver JuJu Smith-Schuster missed some practice days due to “personal issues.”

The Not So Obvious: The irony of JuJu missing practice this week is that he has just been added to the watch list for the Biletnikoff Award, the award given to college football’s top receiver.