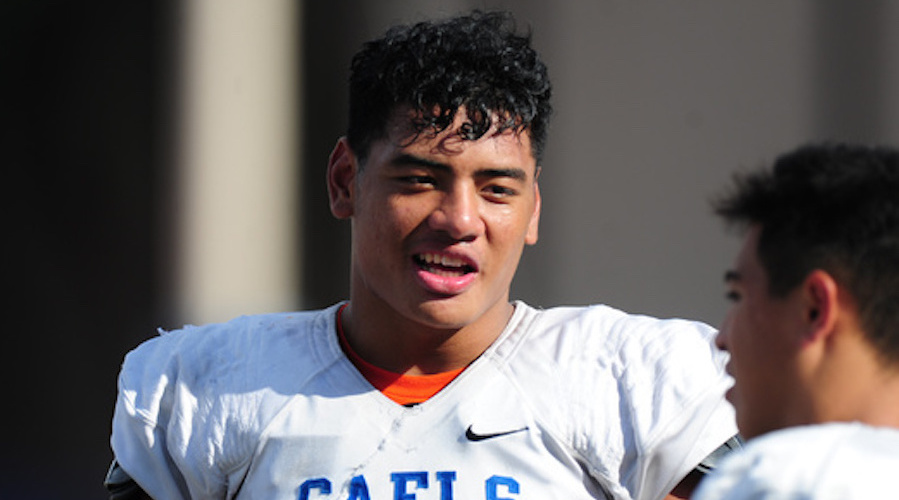 The Obvious: The No. 8 USC Trojans and the No. 5 Ohio State Buckeyes will be the main event in the 82nd Cotton Bowl on Dec. 29, but there will be an important recruiting undercard between the two national powerhouse programs, which could have major implications leading into and/or out of the early new signing period (Dec. 20-23) and the standard LOI day (Feb. 7).

The Not So Obvious: The most notable recruits that the two storied programs are vying for are OT Jackson Carman (6-6, 330/ Fairfield Ohio/Fairfield High), LB Palaie Gaoteote (6-2, 235/Las Vegas, Nev./ Bishop Gorman HS), Butkus Award LB Solomon Tuliaupupu (6-2, 220/ Santa Ana (Calif)/Mater Dei HS), and S Jaiden Woodbey (6-2, 204/Bellflower, Calif./ St. John Bosco). The fact that Tuliaupupu and Woodbey are both SoCal kids places a greater emphasis on the Trojans’ recruiting effort. Tuliaupupu, considered a USC lean, and Woodbey, an Ohio State commit, have been regulars around Troy during various times this past season.

The No So Obvious: The Buckeyes are trying mighty hard to have Gaoteote flip and join his former Bishop Gorman teammates, who now call Columbus their athletic/educational home. Although Gaoteote is a West Coast guy, he is not a SoCal backyard kid like Tuliaupupu and Woodbey. As for the Cotton Bowl, you can bet that Palaie will be watching the two defenses of the Trojans and Buckeyes, and then it will get down to his official recruiting visits to both universities.

The Obvious: There are recruiting rumors swirling that current Santa Ana (Calif.) Mater Dei junior quarterback J.T. Daniels is actively pursuing a way to be part of the Trojans’ 2018 recruiting class.

The Not So Obvious: We’ve seen a lot of hyped quarterback over the decades, and most don’t live up to the lofty expectations. However, Daniels appears to be the real deal and his ability to run out of the pocket with speed has added another dimension to his game. It’s not that the kid couldn’t run, but MD head coach Bruce Rollinson didn’t want him to during Daniel’s freshman and sophomore seasons. Getting back to the possibility of early USC enrollment, in this day and age, it wouldn’t be a total shock if Daniels figured out a way academically to be a Trojan after spending three academic years at Mater Dei. As they say, where there’s a will, there’s a way.

The Not So Obvious: As you are probably aware by now, St. Brown is considered by many to be the top receiver in the country. The O/NSO can tell you this, watching him first-hand, the kid is quick-on-quick and is worthy of being called “the real deal.” And Amon-Ra wearing USC gloves in the CIF Final against St. John Bosco the day after the Trojans defeated Stanford for the Pac-12 title should be taken as a good sign. You can also bet that St. Brown has insider information when it comes to J.T. Daniels plans after this semester. This could and should get interesting.

The Obvious: Demetrice Martin is a former Trojans assistant coach who has spent the last several years as the secondary coach at UCLA under Jim Mora.

The Not So Obvious: If the reporting is correct, Martin is not being retained by new UCLA head coach Chip Kelly, and that’s a big deal in the local recruiting world. To put it respectfully, Martin’s UCLA recruiting has been a pain in the Trojans’ backside in head-to-head battles. It will be of great interest to see where Demetrice ends up if he is no longer a Bruin.

The Obvious: While they’re disappointed they’re not in the CFP semi-finals, the Trojan are very excited to play Ohio State in the Cotton Bowl.

The Not So Obvious: No. 5 Ohio State and its players were more than just disappointed they did not get into the CFP as the No. 4 seed. Buckeyes’ head coach Urban Meyer said, “They’re probably devastated. We’ll be fine. It’s going to sting for a while, and then get around those you love and care about and move on.” In other words, expect Ohio State to try and take their frustrations out on the Trojans and prove a point they’re one of the four best teams in America.

The Obvious: This is the first time in the CFP era that a “Pac-12” team has played in the Cotton Bowl.

The Not So Obvious: This is the fourth year in a row — all since the current CFP system went into place — that a Big Ten team will play in a Cotton Bowl. Previously, the Cotton Bowl matched Big 12 and SEC teams. The last time the Trojans played in the Cotton Bowl was 1995 and were a member of the old “Pac-10.” FYI, in the 1995 Cotton Bowl, the Men of Troy waxed Texas Tech, 55-14, behind unstoppable All-American receiver Keyshawn Johnson, who had three touchdowns and finished with eight catches for 222 yards.

The Obvious: In Ohio State quarterback J.T. Barrett and the Trojans’ Sam Darnold, there will be some similarities and some differences.

The Obvious: The last time the Trojans played at AT&T Stadium in Arlington, Texas, they got manhandled by Alabama 52-6.

The Not So Obvious: The last time Ohio State played in AT&T Stadium, it was the 2015 national championship game where they beat Oregon, 42-20, in the first title game in the four-team College Football Playoff era.

The Obvious: Unless you are a donator to the Trojans’ athletic department in some shape or form, a USC public season ticket holder has been asked to apply for Cotton Bowl tickets through a lottery.

The Not So Obvious: Ohio State is reporting they have received 13,000 tickets for the Cotton Bowl and should public tickets become available, they will be available after priority requests from season ticket holders, faculty, staff, and students are fulfilled.

The Obvious: The Cotton Bowl will feature two of the nation’s premier true freshmen tailbacks in Ohio State’s J.K. Dobbins and the Trojans’ Stephen Carr.

The Not So Obvious: Dobbins ran for 1,364 yards on the ground during the regular season, establishing a Buckeyes freshman rushing record (passing Maurice Clarrett, who led the Bucks to its 2002 BCS national championship). Although he missed games due to an ankle injury, the Trojans’ Stephen Carr rushed for 363 yards (5.8 avg.), although he was playing behind All-American and All-Pac-12 first team selection Ronald Jones ll.

The Obvious: And finally, it appears that Trojans’ quarterback coach and passing game coordinator Tyson Helton, brother of the USC head coach, is the new Tennessee quarterbacks coach and offensive coordinator.

The Not So Obvious: Helton to Tennessee is somewhat of a “wow” when you consider current Trojans’ offensive coordinator, wide receivers coach, and former Tennessee star quarterback Tennessee alum Tee Martin was initially part of the recent Volunteers’ coaching rumor mill. Actually, this could turn out to be a win-win concern for all concerned. The O/NSO says this could allow Tee Martin, a former UT QB legend, to transition from a wide receivers coach to quarterbacks coach and open the wide receivers coaching spot for former Trojans’ receiving great and current football staff member Keary Colbert. Stay tuned.