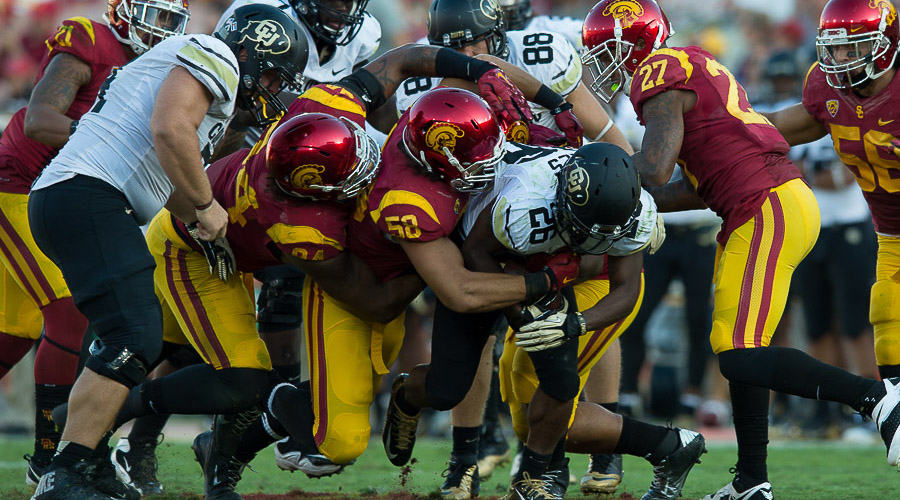 The Obvious: The Trojans will wrap up week No. 2 of spring practice on Saturday with their second Coliseum visit of the week, a 10:30 a.m. workout, which is closed to the public but open for media reporting.

The Not So Obvious: It figures that Saturday could provide a bigger glimpse into the progress of the 2015 Trojans. Although Steve Sarkisian said on Thursday that his team would have a normal practice and not a scrimmage in the Grand Old Lady, we’ll see what advancements appear if some sort of “live” tackling is allowed. With spring break next week and no practice sessions, it appears to be the perfect time to let the Trojan horse out of the barn.

The Obvious: The Trojans have yet to have a scrimmage thus far into spring.

The Not So Obvious: However, don’t let that fool you; it’s relatively early in the process. There is still contact and a lot of linemen one-on-one competition, and the skill players are tested daily against each other, receivers vs defensive backs. Of course, there is nothing like a “live” scrimmage, which tests tackling ability, quarterbacks under pressure, and allows the running backs, as limited as the Trojans are, a chance to strut their stuff.

The Obvious: It was 91 degrees at Thursday’s afternoon practice, and there wasn’t much of a general public in the Loker Stadium reviewing stands.

The Not So Obvious: How hot was it on Thursday? Some media members agreed that it was one of the fastest departures of a Trojans team off the artificial turf of Cromwell Field in recent memory. Of course, after you just practiced in Thursday’s oven, wouldn’t you want to hit the cold showers inside the John McKay Center? As one veteran media wag said, “Wow, I don’t know if I can take much more of this heat.” FYI, it wasn’t the O/NSO for the record.

The Not So Obvious: J-Rob still has that head coaching mindset, as he toured both the offense and defensive sides of the ball on Cromwell Field. If you think that he only paid attention to offense and his vaunted running/passing game, that would be a misnomer. As Robinson has said many times, legendary Trojans head coach John McKay had a profound effect on him being a well-rounded head coach.

The Obvious: As great as John Robinson was as a head coach at USC, he didn’t call his own plays during his second tour of cardinal and gold duty. That responsibility went to an assistant coach named Mike Riley. Heard of him?

The Obvious: Still no word on Trojans sophomore tight end talent Bryce Dixon, who has not participated in spring ball due to a student-conduct issue.

The Not So Obvious: The media asks Steve Sarkisian after each practice for a Dixon update, and it appears that the Trojans head coach is understandably growing weary of having to say that there is no update. In a couple of recent exchanges, Sarkisian, with a grin on his face, asked the assemble media if they were drawing straws to determine which wag would ask the daily Dixon question.

The Obvious: Former Trojans tight end Randall Telfer did not work out at USC’s Pro Day on Wednesday because of foot surgery.

The Not So Obvious: Man, when it rains it pours and it has poured all over Randall. The Trojans graduate student can’t seem to catch a break. Here’s hoping his previous work has been graded fairly, and that somebody takes a chance. It would appear that Telfer might have to go the free agent route when he finally becomes healthy again, but then again it was not a great year in college football for tight ends.

The Not So Obvious: There has never been a real question regarding George’s speed, and Pro Day reinforced any question regarding his speed. However, Farmer would be the first to admit that he still has lots to prove in order to be coveted by an NFL team. Sometimes the best football players don’t have a sizzling 40 time but do have acceleration in and out of breaks and have that fifth gear that really makes a difference. With the 4.3 in Wednesday’s 40, that should be enough to be invited to somebody’s camp.

The Not So Obvious: And the best of the best showcased was still La Puente (Calif.) Bishop Amat wonder, Tyler Vaughns. Looking like a long-armed, long-legged basketball small forward, the kid has it all and the best news is that the Trojans appear to be the team to beat for his services. It certainly didn’t hurt in the big picture that Tyler had the top-rated quarterback at the camp, K.J. Costello (Coto de Caza, Calif./Santa Margarita Catholic) throwing him the ball.

The Obvious: The Trojans are recruiting a quarterback for the class of 2016, and you’d better keep your eyes on K.J. Costello, who is built more like a tight end.

The Not So Obvious: At the Nike Football Opening Regional Los Angeles, Costello certainly made his case. K.J. was a man out there, both in his physical prowess and his competitive aggressiveness. He wanted to be the first guy in drills and really spun the pigskin in spite of the strong winds blowing off the Pacific Ocean. K.J. told the L.A. Times on Sunday that he is not concerned at all about competition at USC or anywhere else. The O/NSO takes that as the Trojans are in play along with Stanford and Michigan and don’t bet against the Cardinal and Gold in this one.

The Not So Obvious: In our years of covering this event both at Redondo Beach High and earlier at USC, this was by far the least amount of talent that we’ve seen. No question that USC recruit and Santa Ana (Calif.) Mater Dei offensive tackle Frank Martin was a cut above the rest, but the real stud of both units was Hawaii’s Michael Eletise (Kaiser H.S.), who figures to be an offensive guard at the next level and received an invitation to attend the nationally prestigious The Opening in the summer.

The Obvious: Paul McDonald is a former All-America USC quarterback, who guided the Trojans to the 1978 National Champions under coach John Robinson.

The Not So Obvious: Paul was at the Nike Football Opening Regional Los Angeles to watch his youngest son, Matthew, spin the football like good old dad. Considered the starting quarterback as a junior next season for prep powerhouse Santa Ana (Calif.) Mater Dei, one distinct difference between dad and son is that Paul is a lefty and Matthew is a righty. While Paul’s previous two sons had good careers in high school and played the position in college, Matthew is considered the most talented of the bunch.

The Obvious: Nike Football Opening Regional Los Angeles brought together a number of former and future Trojans as instructors and observers.

The Not So Obvious: While former Trojans all-timer William McGinest worked with the defensive linemen, two future Trojans were handing around in defensive linemen Rasheem Green and a lineman that looked anything but like an incoming freshman. In fact, most observers thought the other Trojan was already in college or in the pros. His name? Noah Jefferson (6-6, 330) from Las Vegas Liberty, and, yes, he definitely passes the eyeball test.

The Obvious: The Trojans will travel to Arizona State to play the Sun Devils on Sept. 26.

The Not So Obvious: Speaking of ASU, they recently released a revised look at its renovation plan for Sun Devil Stadium. Most Trojans fans are eagerly anticipating when the USC Athletic Department will release its plans for Coliseum renovation.

The Obvious: The NCAA’s Playing Rules Oversight Panel is in charge of new rules for college football, which could affect Trojans games next season.

The Not So Obvious: The panel approved several rule changes, including allowing, but not requiring, conferences to use eight officials rather than seven; expanding the purview of instant replay to allow officials to determine whether, on onside kicks, a kicking team player blocked a receiving team player before the ball traveled 10 yards; adding an unsportsmanlike conduct penalty for players who push or pull opponents from piles; running 10 seconds off the game clock if a defensive player’s helmet comes off in the final minute of a half.

A return to issuing teams a sideline warning before penalizing them for leaving the team bench area; requiring players with illegal equipment issues to leave the field for one play; prohibiting “nonstandard/overbuilt” facemasks; requiring teams be given at least 22 minutes for pregame warm-ups on field; and resetting the play clock to 40 seconds if it reaches 25 seconds before officials have spotted the ball.

Got all that? You will be tested during the Trojans spring game on Saturday, April 11, in the Coliseum at 3 p.m.

The Obvious: Former Trojans offensive tackle Anthony Munoz is a member of the Pro Football Hall of Fame.

The Not So Obvious: Munoz, who played is NFL ball for the Cincinnati Bengals, and was recently awarded the Outstanding Contributions to Amateur Football Award by The NFF Greater Cincinnati Chapter at its annual Scholar-Athlete Banquet.

The Obvious: And finally, former Trojans quarterback Mark Sanchez has resigned with the Philadelphia Eagles for two more seasons.

The Not So Obvious: The NFF Orange County (Calif.) Chapter hosted its 45th Annual Scholar-Athlete Awards Dinner on Monday night at the Anaheim Convention Center. The guest speaker was quarterback Mark Sanchez, who was honored as a scholar-athlete by the chapter in 2004.