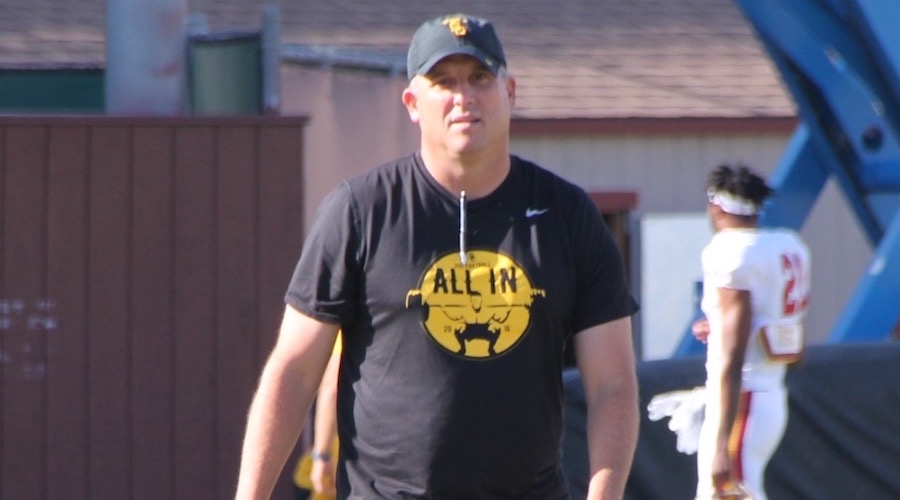 The Obvious: The USC Trojans are not scheduled to play the Washington Huskies during the regular 2017 Pac-12 schedule and will not meet unless the two conference powers play in the Pac-12 title game next December.

The Not So Obvious: University of Washington head coach Chris Petersen will be one of the main speakers at the USC Football Coaches Clinic to be held March 31 – April 1 in the John McKay Center on the Trojans campus. It figures to be an interesting and probably entertaining interaction by Petersen with perhaps some revelations regarding last season’s loss to the Trojans along with some insight into the 2017 season.

The Obvious: The Trojans will host the Oregon State Beavers on Saturday, Oct. 7.

The Not So Obvious: Oregon State head coach Gary Andersen will also be one of the main speakers at the USC Football Coaches Clinic. With the Trojans meeting the Beavers for the first time since 2014 when the Trojans drilled Oregon State 35-10 in the Coliseum, Anderson figures to have some interesting comments as it pertains to his boys from Corvallis and their Los Angeles visitation in October.

The Obvious: Matt Wells is the head coach at Utah State, a position he has held since 2012.

The Not So Obvious: Wells will be the third headlining speaker at the USC Football Coaches Clinic. Wells and his Aggies last played the Trojans last season in the Coliseum, as the Trojans rebounded from the Alabama disaster to crush Utah State 45-7 in the Coliseum.

The Obvious: The USC Football Coaches Clinic has always been a popular stop of coaches and fans of all levels.

The Not So Obvious: The comprehensive two-day clinic will also feature presentations by Trojans head coach Clay Helton (photo above) and his staff, as well as offensive and defensive staff roundtable discussions covering philosophy and scheme and in-depth position meetings led by each position coach. Trojans strength and conditioning coach Ivan Lewis also will conduct a presentation on player development and the off-season/in-season training program.

The Obvious: Trojans spring football practice is scheduled to begin Tuesday, March 7, in the late afternoon.

The Not So Obvious: The USC Football Coaches Clinic will also include a visitation to the Trojans’ spring football practice on April 1 on Howard Jones Field.

The Obvious: As mentioned, past clinics have seen coaches of all levels in attendance.

The Not So Obvious: The clinic is open to coaches of all levels, as well as fans who want to learn more about the USC football staff and its coaching philosophy. For all you Monday Morning Quarterbacks, here’s your chance to learn the nuances of what happens on game day.

The Obvious: As with past clinics, there will be a tuition to attend and participate.

The Not So Obvious: Cost of the two-day USC Trojans Football Coaches Clinic is $80 ($65 for a single day). The clinic offers a staff discount of $15 off per person for groups of five or more who pre-register together for both days.

The Obvious: Coaches and fans that want to participate in the USC Trojans Football Coaches Clinic have easy access for registration.

The Not So Obvious: Online registration is available at www.FIGHTONCAMPS.com. For more information, email [email protected].

The Obvious: Eight Trojans were officially invited this week to the 2017 NFL Combine.

The Not So Obvious: Those selected include OT Zach Banner, RB Justin Davis, CB Adoree’ Jackson, OG Damien Mama, WR Darreus Rogers, WR JuJu Smith-Schuster, NT Stevie Tu’ikolovatu, and OT Chad Wheeler. The NFL Combine will be held Feb. 28 to March 6 at Lucas Oil Stadium in Indianapolis. While all these Trojans are worthy of combine attendance, it is especially noteworthy that Rogers, Davis, and Tu’ikolovatu were invited, something you probably wouldn’t have predicted with certainty prior to the beginning of last season.

The Obvious: Mike Mayock is an NFL talent evaluator and pro and college football media analyst.

The Not So Obvious: Regarding Adoree’ Jackson and fitting into what Mayock calls “special exceptions,” Mayock says, “He’s the poster boy for this group because with eight return touchdowns and all that talent, he provides immediate talent as a return guy. He’s not a top 5 corner yet, but he’s raw and can develop into one. So, he’s not on a top 5 list but presents all kinds of value.”

The Not So Obvious: According to strength and conditioning coach Ivan Lewis at the recently held San Gabriel Valley Trojans Club, “I haven’t seen a guy (Edoga) so motivated to be the starting left tackle.”

The Obvious: Kenny Bigelow is expected to be a strong candidate to replace Rose Bowl Defensive MVP Stevie Tu’ikolovatu at nose tackle.

The Not So Obvious: According to strength and conditioning coach Ivan Lewis at the recently held San Gabriel Valley Trojans Club, “Right now we’re looking at Kenny like he’s going to be the guy at nose tackle. He’s ready to go, strong, it’s his time.”

The Obvious: And finally, spring practice is just a few weeks away.

The Not So Obvious: Spring practice will commence the first week of March and then break for a week of Spring Vacation. The annual spring game will be held on Saturday, April 15, in the Coliseum at noon (PT). The “game” will be televised by the Pac-12 Networks.