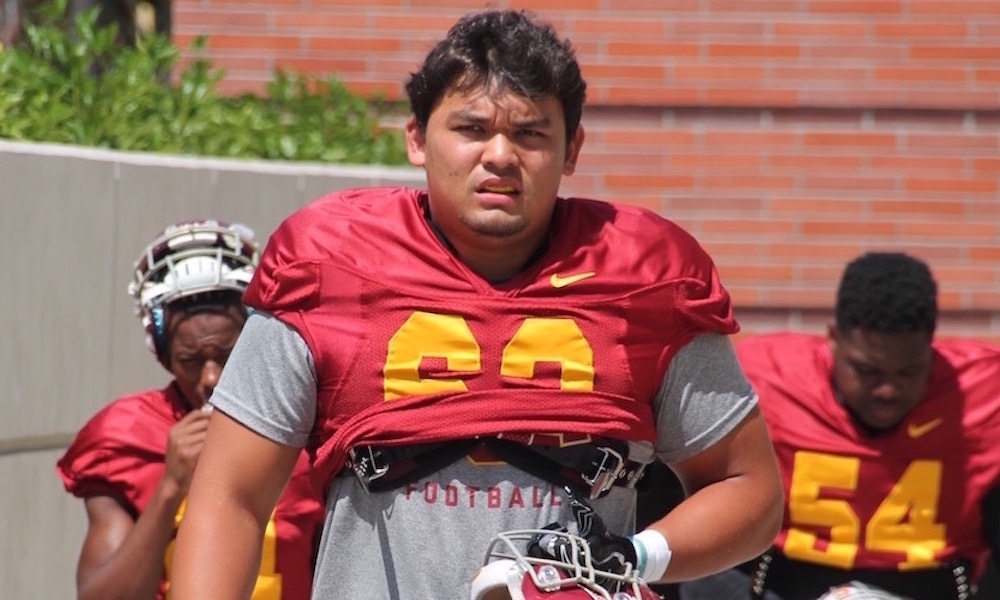 The Obvious: The Trojans conclude their second week of spring ball on Friday afternoon, and it’s expected that part of practice will be game-like scrimmage situations with live tackling or “live bullets,” as head coach Clay Helton likes to say.

The Not So Obvious: Much of Friday’s festivities will literally center on the center competition, which means the battle royal featuring redshirt freshman Brett Neilon (photo above) and true freshman Justin Dedich. With senior Toa Lobendahn being held out of spring contact to protect his surgically repaired knees, the two youngsters get their opportunities to show what they’ve got.

The Not So Obvious: Asked how his spring camp was going, Neilon said, “Spring is definitely different from the (regular) season because we’re not practicing every day. There’s more time to improve and watch film on the off days, which is nice. Coach Callaway is definitely more detailed oriented than scheming for games. There’s more time to improve, and I am excited.”

The Obvious: Each Trojan in spring practice has a set of personal improvement goals.

The Not So Obvious: Asked where he’d like to improve, Brett Neilon said, “I want to definitely be more consistent. I want to do the right things, my blocking and things like that. I want to bring the work attitude every day.”

The Obvious: As mentioned, one of the nation’s most competitive and intense prep leagues is the Trinity League, which consists of many of the premier parochial schools in California.

The Not So Obvious: Nobody knows better the competition in the Trinity League like Brett Neilon and how the super league prepares a player for a school like USC. Neilon said, “It definitely help playing in a league that’s one of the best in America. However, when you get here, it’s a whole different game. The players are bigger, faster, stronger. They have more (defensive) fronts that what you’ve have seen and have to be aware of. It’s definitely a change, but the Trinity League prepared me well.”

The Obvious: True freshman Justin Dedich has made believers of the Trojans in terms of his advanced abilities and physicality.

The Not So Obvious: As per protocol, Dedich has not yet been released to talk to the media regarding his early transition into college. However, that did not stop Brett Neilon in giving a very favorable evaluation of his main competition for backup center position. Neilon said, “He’s great. We have a locker right near him. I like his family, he’s great worker, he’s asks Toa (Lobendahn) and me questions to get better. I am definitely excited to work with him in the spring and the season.”

The Obvious: Although he can’t participate in contact during spring ball, senior center Toa Lobendahn still works out and spends time teaching his young protégé centers how things are done at the collegiate level.

The Not So Obvious: Commenting on his young hiking underlings, Brett Neilon and Justin Dedich, Lobendahn said, “Brett and Justin, they’re definitely talented young guys. They’re ready to work and working their butts off right now and doing their best. They’re doing a pretty good job. Justin just coming in I am impressed with what he’s done; he’s a real physical guy. He just needs to learn the plays because he just got here, and Brett is getting better because he’s already been in the system for a year.”

The Obvious: Trojans’ head coach Clay Helton is fully aware that there are not enough centers to prepare for any disastrous emergencies that can befall an offensive line.

The Not So Obvious: Reflecting on center depth and the competition between his young “snappers,” Helton said, “They’re doing a wonderful job. God’s always watching you as we’ve seen in the past; we’ve had to train a lot of centers. One year, if you remember, we had to get all the way down to our fourth string in Nico (Falah), and thank God we trained him, to give more reps to kids that really haven’t stepped on the field in live game action. To be able to get them valuable reps against a Brandon Pili, a Jay Tufele, a Connor Murphy, those kind of individuals, it’s only going to make them better. They’re competing well. The overall feel is let’s get them to the point where they can win Pac-12 championships.”

The Obvious: One of the Trojans’ young bright spots in the early stages of spring practice has been the play and physicality of true freshman safety Talanoa Hufanga (Corvallis, Oregon/ Crescent Valley).

The Not So Obvious: Showing his physical aggressiveness and athleticism, Talanoa, delivered a punishing “how do you do” to veteran tailback Dominic Davis, who was knocked to the grass on Brian Kennedy Field. Davis was none too thrilled with the true freshman’s unexpected knockdown greeting, but Hufanga reached out for an apologetic handshake, which appeared to be rejected. Showing no hard feelings, Talanoa still gave Davis a conciliatory pat on the back.

The Obvious: Former Trojans’ All-America receiver Mike Williams could arguably be considered as good a wide receiver as there has been at Troy.

The Not So Obvious: Big Mike left school too early to fully execute his impact, but there were some comparisons drawn this week when incoming freshman wide receiver Devon Williams was seen at practice. The O/NSO and WeAreSC publisher Garry P. agree that at his size (6-4, 200), Devon Williams looks a lot like Mike Williams when he entered Troy, and it figures that Devon will be a high-point nightmare for defensive backs before it’s all said and done. And, no, we don’t see tight end in Devon’s future any more than we saw Mike Williams future as a tight end.

The Obvious: And finally, the Trojans have a number of players that are either out of spring ball due to injury or are being held out of contact drills for precautionary measures.

The Not So Obvious: And you thought it was only the players that are limited during spring ball contact? Well, here’s get well wishes to Trojans’ linebacker coach and recruiting extraordinaire Johnny Nansen, who is recovering from knee replacement surgery and is shelved for the rest of spring. Joe DeForest, who has been hired as a defensive analyst, will take over Nansen’s linebacker coaching responsibilities for the balance of spring ball.