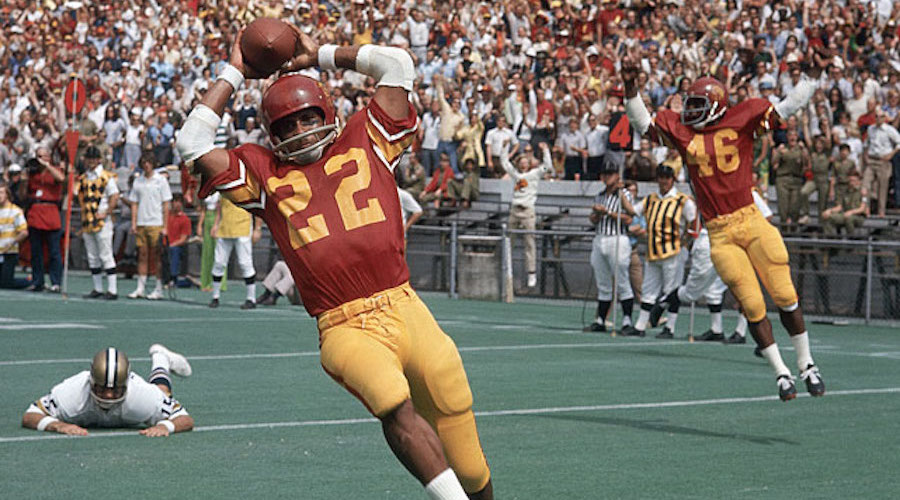 The Obvious: With the 2017 USC Trojans football season having come to a close and quarterback Sam Darnold announcing this week that he’s headed to the NFL, the Men of Troy will begin preparation for the 2018 season, hoping to take that “proverbial” next step.

The Not So Obvious: Thanks to a fake news leak and an unnamed anonymous source inside the John McKay Center, the O/NSO can share with you one of the immediate off-season marching orders, as directed by athletic director Lynn Swann (photo above), the former Trojans’ All-American and NFL Hall of Fame receiver. The O/NSO has learned that all returning personnel inside the football program will spend an upcoming mandatory weekend at a secret retreat, code name “Camp Swannie.” As for the retreat’s agenda, below are the opening and closing remarks for the camp, mandatory and elective classes, instructors, course descriptions, and exhibits.

The Not So Obvious: The O/NSO has learned that Swann will open the festivities with some humorous remarks. Swannie will address the large gathering by chuckling, “Forget about the lopsided Cotton Bowl loss to Ohio State, it could be worse. You could be Clay Helton, losing your All-Conference backfield of Sam Darnold and Ronald Jones ll to the NFL.” Moments later, old No. 22 will lighten his razor-sharp humor with, “All kidding aside, we’ll be fine. Look at Georgia, they started a true freshman quarterback, and they’re in Monday night’s national championship against Alabama. I actually think that our JT Daniels kid, the true freshman coming here from national prep champion Mater Dei High, may turn out to be better than Darnold…if he (winking at Clay Helton) earns the starting nod in August training camp.”

At that point, old No. 22 will first pass out the camp agenda and begin the weekend by showing the following video: https://www.youtube.com/watch?v=o3mTmICz2g4

The Not So Obvious: Instructor: The ghost of Marv Goux

Course Description: In the first night of camp, the ghost of Marv Goux will bus the entire Trojans’ contingent to Camp Pendleton to learn how to be Trojan tough. Players will learn how to wear the same game-day socks and shoes, exhibit acceptable sideline behavior, the proper celebration of in-game behavior, how to play to the whistle, and how to be physically tough enough to compete with the likes of Ohio State, Alabama, and Notre Dame. Camp slackers will be sent to the ghost of Marv Goux’s private office for an attitude adjustment.

The Not So Obvious: Instructor: Ronnie Lott

Course Description: The returning 2018 Trojan secondary players will learn the basic fundamentals of playing in the secondary from this USC legend. Emphasis will be on the elimination of pass interference penalties, the elimination of mental breakdowns, proper communication, and how to avoid poor tackling. A highlight of this session will be emphasis on physical play without drawing a penalty flag. Ronnie Lott will say you have to sacrifice your body, and then will proceed to show the Trojans’ secondary his amputated finger from his playing days and three players will pass out.

Course Description: Specific emphasis will be on physical toughness, drive blocking to finish, and pancake blocks. Special attention will be run blocking and proper technique and how to dominate even the most imposing defensive linemen. Houck will impart his famous clichés on linemen with big butts: “You can’t drive a spike with a tac hammer” and “When fundamentals don’t work, just beat the sh*t out of the guy in front of you.” Brad Budde then will approach one of those Trojans’ young linemen, give one his patented bad-ass stares, and the young defensive lineman will sink into a fetal position. Boselli will give testimony on what it takes to be great.

The Not So Obvious: Instructor: Marcus Allen.

Course Description: The former USC captain will do a seminar to potential 2018 captains on how to discipline their teammates when their teammates don’t study their assignments or execute them in a game. Allen will say it all starts with toughness and to make his point, Marcus will challenge any of the linebackers in attendance to tackle him right here, right now, and to take a step forward. Two of the linebackers take a step backward after watching the following Allen instructional video.

The Not So Obvious: Instructor: Lynn Swann

Course Description: The Trojans’ athletic director will present the basics for not dropping balls and how to high-point a reception. Swann will speak to the art of swag and how to walk the walk without the talk. He will then pick out a member of the secondary and challenge him to cover him one-on-one. Swannie will then show the following video to inspire the current Trojan receivers.

The Obvious: The art of playing physical 106

The Not So Obvious: Instructor: Rey Maualuga

Course Description: Although primarily a defensive course, offensive linemen will be invited to attend in order to understand that if the Trojans plan on ever being in the CFP, they’ll need to up the attitude. Maualuga will then perform the Haka. As part of the hour, Rey will then show a highlight of knocking UCLA quarterback Patrick Cowen out of bounds.

The Not So Obvious: Instructor: The ghost of John McKay.

Course Description: Primarily for Clay Helton, his coaching staff, and his administration, the legendary USC coach descends from the heavens and lectures the staff on how to properly run a power running game, how to create an offensive identity through ground and pound, and how to call running plays inside an opponent’s 5-yard line. McKay will finish the hour by emphatically emphasizing, “If you have input from three offensive play callers in a game, you have don’t have an offensive coordinator.” The ghost of John McKay will then run a short documentary on his reflections of coaching at USC and the power running game.

The Not So Obvious: Instructor: Pete Carroll

Course Description: The former Trojans’ head coach will emphasize that recruiting is a staff effort, and future Trojan players need to be recruited by their position coach, as well as the entire staff. Carroll will inform that it doesn’t hurt if you play a game of basketball in the backyard of a recruit’s home with the recruit’s brother(s) and/or sister(s) while swooning the recruit’s mother. To add a little recruiting brevity to this recruiting seminar, current Trojan tight end Josh Falo will play his Haka video recruiting announcement video.

The Not So Obvious: Instructors: The ghosts of Tom Kelly and Mike Walden, the living presence of Pete Arbogast, and former ABC college football legendary announcer Keith Jackson.

Course Description: These broadcast “voices” of USC football over the decades narrate highlights of the USC national championship teams of 1962, 1967,1972, 1974, 1978, 2003, and 2004. Players will then be asked to get into groups of five and discuss the common traits of these six title teams. As a point of emphasis, Keith Jackson will play the ABC video of the 1974 national champion Trojans’ legendary second half comeback over Notre Dame in the Coliseum. And, yes, that’s Ohio State’s legendary head coach Woody Hayes as the analyst.

The Not So Obvious: Instructor: Sam “Bam” Cunningham

Course Description: An elective course that recalls the use of a position once called the fullback. The seminar will explore how the fullback was once used in goal line and short yardage situations. Cunningham will also do a chalk talk about how to use the fullback as a running back and a pass receiver. Sam Bam will then turn to the highlight video of the national championship victory over Ohio State in the 1973 Rose Bowl and dissect his legendary four touchdown dives over the Buckeyes’ defense on the goal line. Cunningham will talk of his pride for uniform No. 39.

The Obvious: Kickoff and punt returns 111

The Not So Obvious: Instructor: Adoree’ Jackson

Course Description: Another elective course, Jackson makes a surprise visit to remind the current Trojan returners on the art of returning a kickoff and a punt for a positive return. Adoree’ will be available for individual counseling after the seminar. Jackson will place emphasis on seeing the entire field on a kickoff or punt return.

The Not So Obvious: Instructor: John Robinson

Course Description: Another elective course, the legendary coach discusses the art of clock management and the proper use of timeouts per half. Robbie will use the Trojans’ 2016 and 2017 seasons as a teachable moment.

The Not So Obvious: Instructor: Sam Darnold

Course Description: The “former” Trojan quarterback great will instruct those in attendance how to gracefully and thoughtfully announce turning pro through the use of technology.

The Obvious: And finally, closing remarks.

The Not So Obvious: Instructor: Lynn Swann

Course Description: Swann will end the conclave by saying, “Hey, Sam’s gone and some folks have already written off the 2018 season. Lynn will then turn to Clay Helton and enthusiastically scream, “Prove’em wrong coach! Let’s make it two Pac-12 championships in a row and on to the playoffs!” The attendees will then begin chanting in unison, “We Are…SC, We Are…SC!!!”