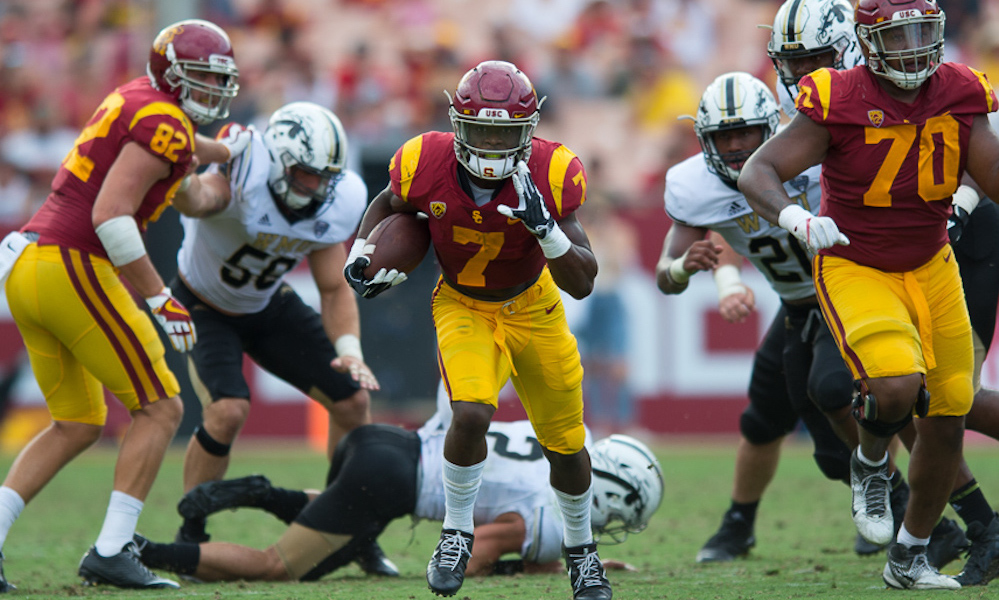 The Obvious: Who would have thought before the 2017 season that when the No. 5 USC Trojans (3-0, 1-0 Pac-12) traveled to play the upstart California Golden Bears (3-0, 0-0 Pac-12) in big Pac-12 game in Memorial Stadium, both teams would be undefeated? Well, that’s exactly what will unfold in Berkeley on Saturday afternoon (12:30 PT), an unexpected battle of unbeatens, and you can bet Strawberry Canyon and Tightwad Hill will be rocking and rolling.

The Not So Obvious: The Golden Bears have grown each week in confidence under first-year head coach Justin Wilcox, the former beleaguered Trojans defensive coordinator, and it should be noted the last time Cal defeated the Trojans was 2003 in Berkeley in a triple overtime thriller, 34-31. Wilcox, the former Trojans defensive coordinator who wasn’t exactly given a loving hug and departing gift before heading to the University of Wisconsin as the Badgers’ DC, would like nothing better than to hand the Trojans a painful upset.

The Obvious: The Trojans opened a 15 ½ -point favorite to defeat Cal.

The Not So Obvious: For the record, the Trojans are riding a 13-game winning streak against the Bears and have won the last 15 of 16 games with the oldest UC system school. This is the 105th meeting between the two universities. It’s also the Trojans first road game of 2017 after opening the season with three consecutive victorious home games. In road openers, the Trojans are 81-29-8 (.720). With a victory, the Trojans would increase their seasonal record to 4-0, the first time since 2010. As for Cal, a win and the Bears would be 4-0 for the first time since 2015.

The Not So Obvious: The ABC broadcasters for Saturday afternoon’s Bay Area showdown will be Dave Pasch (play-by-play), Greg McElroy (analysis), and Tom Luginbill (sidelines).

The Not So Obvious: The Cal broadcast can be heard on flagship station KGO (810 AM) with the legendary Joe Starkey (play-by-play), Mike Pawlawski (analyst) and Todd McKim (sidelines).

The Obvious: Saturday’s Berkeley weather forecast calls for sunny with a high of 76, low of 55, 46 percent humidity, and 0 percent precipitation.

The Not So Obvious: The real weather report is whether the Trojans are emotionally and physically spent after last weekend’s grueling and physically demanding second overtime victory over Texas. We also await whether a host of Trojans starters will play on Saturday, which includes DT Rasheem Green (high ankle sprain), OLB Porter Gustin (toe/bicep), TB Ronald Jones ll (thigh/ankle), CB Ajene Harris (knee), OLT Chuma Edoga (wrist), and ILB John Houston (neck). Green and Harris are expected to play and Gustin is out. This all coming on a schedule that has no byes during the regular season…We’ll see whether the Trojans offense can return to a balanced attack after last Saturday’s weak rushing performance against Texas. Look for freshman tailback phenom Stephen Carr (photo above) to play a prominent role against the Bears… The good news may be quarterback Sam Darnold’s young receiving corps, which seemed to grow somewhat in the second half against Texas… It’ll be interesting to see whether the Trojans’ offense can slow down stellar Cal senior linebacker Devante Downs (6-3, 240), a real force… We’ll also find out whether Trojans’ freshman placekicking hero Chase McGrath can handle his first road game kicking assignment before an intense and vocal Memorial Stadium turnout…Defensively, we’ll see whether the Trojans secondary will improve from its – at times – shaky pass defense… A key will be whether the Trojans defensive line can mount a significant pass rush if OLB Gustin and DT Green can’t go… We’ll also find out whether the Trojans, as a team, can handle a hostile crowd that’s right on top of the action.

The Obvious: The 2017 Trojans’ offense averages 39.3 points per game while the Cal defense is allowing 22.0 points per outing.

The Obvious: Last Saturday, The Trojans’ offensive line took a real licking – a real surprise to many – against a physical Texas defensive front.

The Not So Obvious: Trojans’ offensive line coach Neil Callaway was very blunt regarding his line’s performance against Texas and revealed his words of wisdom to his linemen regarding his expectations for this Saturday. Callaway sternly said, “We got whipped at the line of scrimmage, and I don’t want to get whipped at the line of scrimmage again. We need to play harder and get after their ass. It was a tremendous win (against Texas) and it’s always good to win, but we didn’t play well upfront and everybody in the country knows it.  We’ll see what happens this week. Every week, new things are going to happen. Bottom line is we have to get after their (Cal) butt, finish, and have a mindset that we’re going to get it done. Get after their ass.”

The Not So Obvious: Lobendahn’s assessment of last week against Texas and what needs to be done, No. 50 said, “They (Texas) did a lot of stuff that complicated some of our angles and our blocks from the backside to get to their linebackers. Their linebackers were able to flow free on a lot of plays. Their nose guards and stuff were pretty physical. We weren’t getting a lot of movement there. We need to get lower on our angles. Cal’s front is much improved from last year. Their defense is looking good; it’s the same stuff that Wilcox was running here. I practiced against it the first two years of being here, so I am very use to what he’s doing. They’ve switched up little things, but it helps.”

The Obvious: Justin Wilcox is the Trojans’ former defensive coordinator.

The Not So Obvious: Assessing his performance with Trojans, Wilcox says, “Clay didn’t hire me to USC. I went down there with Coach Sarkisian. We went through some things as a program. We didn’t do a good enough job on defense, which falls on me. I totally understand. That’s our profession. Those things happen. It’s not always the most fun, but that’s the way it is. You’ve just got to learn from it, evaluate yourself, and move forward. I think Clay is a heck of a coach, and he’s doing a great job.”

The Obvious: The Cal offense has been somewhat of surprise in 2017.

The Not So Obvious: Assessing Cal’s offense and how has it changed with the new coaching staff, Trojans’ DC Clancy Pendergast says, “I think they’re using the field a little bit more in the passing game, they’re spreading the ball out. They’re using a little bit more four wide receiver sets consistently than what they did last year. It’s a completely different offense. I think they’re using the whole field in the passing game and they’re averaging over 160 yards rushing, so they’re able to control the clock. They’re a spread style attack. We’ve only seen Stanford (in conference), so they’re a lot different than Stanford.”

The Not So Obvious: Roth was a celebrated Cal quarterback (1975-76) who tragically died of cancer in 1979. Up to this point in the young season, Cal fans have been cautious when deciding to attend a Bears home football game. Last weekend against an SEC team (Ole Miss), only 37,125 showed up in Memorial Stadium. Since it’s the No. 5 Trojans, Joe Roth Day, and excellent weather expected, there figures to be a large turnout.

The Obvious: The Cal quarterback is sophomore Ross Bowers (6-2, 200), a native of Bothell, Washington.

The Not So Obvious: Bowers’ father, John, spent three seasons on the football coaching staff at his alma mater, James Madison, and helped lead the Dukes to a 2016 FCS national championship in his final season at the school. Bowers’ mother, Joanne, spent 10 seasons from 2006-16 as the head women’s gymnastics coach at Washington, where she led the Huskies to NCAA Regional play in each of those campaigns and sent individuals to the NCAA Championships on seven occasions.

The Obvious: The Trojans defense is led by linebackers Cameron Smith, Porter Gustin, and Uchenna Nwosu.

The Not So Obvious: Cal’s defense is spearheaded by Devante Downs, who is in the national Top 15 in tackles and sacks.

The Obvious: Cal has a number USC connections.

The Obvious: The Trojans have seven players from Northern California on the roster.

The Not So Obvious:  The rally beings at 7 p.m., so get there early to get a good viewing spot.