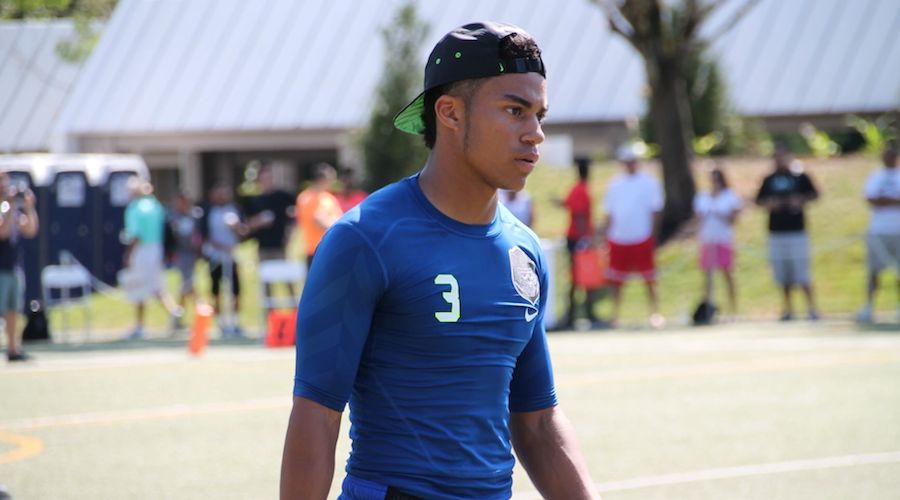 The Obvious: The Trojans hit The Opening recruiting bingo Friday evening when WR/DB Trevon Sidney (La Puente, Calif./Bishop Amat) nationally announced he would be a USC Trojan; this coming a day after safety C.J. Pollard (Gardena, Calif./Serra) made his public announcement that he would be following in the cardinal and gold footsteps of his father, Marvin Pollard, a former Trojans corner.

The Not So Obvious:  With the Sidney and Pollard verbals,  it’s further evidence that Steve Sarkisian’s recruiting Class of 2016 could be on its way to another top 5 recruiting finish come February. One can only wonder how this will affect some of the other uncommitted Trojans recruits that came in contact with both both players at The Opening.

The Obvious: Both La Puente (Calif.) Bishop Amat and Gardena (Calif.) Serra have been major high school pipelines of talent for the Trojans over the years.

The Not So Obvious: With the verbal by Trevon Sidney, the Bishop Amat pipeline continues or have you forgotten the likes of QB’s Pat Haden and Paul McDonald, WR’s J.K. McKay and John Jackson, LB Adrian Young, DB Daylon McCutheon, and RB Rodney Sermons?

The Obvious: The watch list for the 2015 Paul Hornung Award – given annually to the nation’s most versatile player – was unveiled on Monday, and USC’s electrifying sophomore cornerback/wide receiver/ kick returner Adoree’ Jackson received a nomination.

The Not So Obvious: The O/NSO has no idea if Adoree’ will win the Paul Hornung Award following the conclusion of the season, but if Jackson plays up to expectations and doesn’t win the award, we’d sure like to see who does.

The Obvious: Linebacker Su’a Cravens and corner Adoree’ Jackson have made the watch lists for the Bednarik and Bronko Nagurski Awards, given to the nation’s top defensive player.

The Not So Obvious: As always, when two players from the same school are nominated, you hope that doesn’t divide and hurt each other’s chances in the voting process.

The Obvious: Trojans three-year starting quarterback Cody Kessler has made the watch list for the Maxwell Award, given to the nation’s top player.

The Not So Obvious: The Maxwell Award isn’t exactly new to USC history. Three Trojans have won the prestigious award including O.J. Simpson (1968), Charles White (1979) and Marcus Allen (1981). While all three Trojan winners are tailbacks, it is somewhat surprising that one of the Trojans Heisman Trophy winning quarterbacks, Carson Palmer and Matt Leinart, did not win a Maxwell.

The Obvious: Cody Kessler is participating this weekend as a counselor in the Manning Passing Academy.

The Not So Obvious: The Manning Passing Academy is celebrating its 20th year of operation and, yes, it’s owned by the famed Manning family or have you forgotten Archie, Peyton, and Eli? The camp is not just for quarterbacks but running backs, wide receiver and tight ends, too. The campsite is located at Nicholls State University in Thibodaux, Louisiana (60 miles west of New Orleans, and 60 miles north of the Gulf Coast).

The Obvious: The Outland Trophy is awarded to the best lineman in the country.

The Not So Obvious: It should come as no surprise that decorated Trojans senior center Max Tuerk has been named to the 2015 Outland Trophy Watch List, but it was a surprise that Trojans senior nose tackle Antwaun Woods joins Tuerk on the list. Making it all the more intriguing is that both players battle each other on the practice field.

The Obvious: Senior Max Tuerk is considered by some as the nation’s top center and has been named to the 2015 Rimington Award Watch List.

The Not So Obvious: There are also 63 centers also on the Rimington Award Watch List including seven other Pac-12 centers with the exception of Washington, Washington State, Arizona, and Cal.

The Not So Obvious: Tuerk has plenty of competition for the Rimington Award, which includes 2014 Rimington Trophy Finalist Jack Allen of Michigan State. This season’s watch list also features 17 other returning centers previously included.

The Obvious: One of the Trojans verbal commitments at The Opening this week was linebacker Daelin Hayes (Ann Arbor, Mich./Skyline).

The Not So Obvious: In an exclusive WeAreSC interview with WeAreSC’s Garry P., Hayes revealed that when he committed to the Trojans he was 6-foot-2, 225-pounds. At The Opening, Daelin said he is now 6-foot-4, 240-pounds.

The Obvious: Because of the success the Trojans have had with their glorious history of All-American and Heisman Trophy winning tailbacks, there are lesser-known USC tailbacks that perhaps would be highly celebrated if they had played at another school.

The Not So Obvious: One such Trojans tailback was Estrus Crayton, a Trojans tailback from 1991-92. Estrus is part of the “Tailback U” tradition as the Trojans leading rusher in 1992 (700 yards). After transferring from the state of Texas to play high school ball locally at Santa Ana (Calif.) High and then on to Santa Ana Community College, Estrus continued his football career with the Trojans, and then played in the German Football League for nearly 19 years, winning seven German Bowls in his career while playing for seven different teams. He is considered one of the all-time greats in Germany. Pass the brats.

The Obvious: By unanimous vote, the Rose Bowl Operating Company has decided not to respond to an NFL request to use the Rose Bowl as a temporary home for a potential NFL franchise transfer.

The Not So Obvious: If the Rose Bowl is surprisingly out of the NFL transfer picture, it should make the Coliseum a much more attractive venue and a potential monetary windfall for USC.

The Obvious: And finally, the Coliseum is just one of a number of potential facilities being viewed favorably by the NFL.

The Not So Obvious: According to the Los Angeles Times, the other competition for a temporary NFL home includes Dodger Stadium, Angel Stadium, and the SubHub Center in Carson. The biggest threat to the Trojans bid for a competing NFL tenant could be Dodger Stadium. However, it would appear more logical and comfortable for a possible move of the St. Louis Rams back to their Los Angeles roots by playing in their original home, the Coliseum, rather than play in jilted Angel Stadium, their once controversial transplanted home before heading to St. Louis.