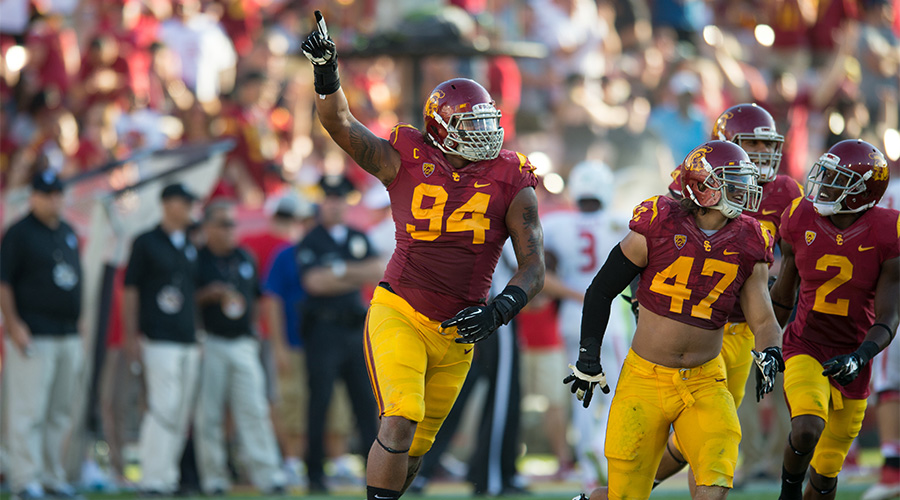 The Obvious: Leonard Williams is a former USC Trojans All-America defensive lineman who left school early and entered his name into the 2015 NFL draft.

The Not So Obvious: Who knows how good “The Big Cat” would have been had he returned for his senior season with the Trojans, ESPN draft guru Mel Kiper has now elevated Leonard to the top of his mock 2015 draft board, supplanting Florida State quarterback Jameis Winston, who has “slipped” to second overall in the draft.

The Not So Obvious: Let’s not forget that Lobendahn did a great job against Nebraska’s all-star defensive end Randy Gregory, who remains the No. 5 pick overall in Mel Kiper’s latest draft rankings.

The Not So Obvious: Who will ever forget the disappointment when Armstead selected the Ducks over the Trojans way back when. It wasn’t a total shock because of all the issues going on with Arik’s older brother Armond, who has legal issues with the Trojans over alleged medicine administered to him when he was once a Trojans. Can you imagine a 2014 Trojans defensive line tandem of Leonard Williams and Arik Armstead?

The Obvious: Louisiana prep quarterback superstar Shea Patterson (Shreveport Baptist Academy) announced this week that he would commit to Mississippi.

The Not So Obvious: So much for the kid really liking the Southern California weather. It really came down to the real whether as whether he wanted to compete with the current roster of talented Trojans quarterbacks rather than take the safe route to Mississippi.

The Obvious: The NFL testing combine, which got underway this week in Indianapolis, figures to benefit those Trojans that were invited.

The Not So Obvious: The one Trojans invitee that draws the most interest for the O/NSO is tight end Randall Telfer. Of all the Trojans showcasing their skills, Telfer could be rewarded at the April draft with a good performance. This season’s NFL draft for tight ends is considered weak, so Randall can make a move this week.

The Obvious: There is a lot of speculation and comments that Trojans corner Josh Shaw will need a good performance to offset his much discussed off-field episode.

The Not So Obvious: It will be intriguing to follow Shaw all the up to April’s draft to see how much his in-season issues will affect his draft status. From what seems to be out there from some of the experts, those issues of character could have a big bearing, or maybe some pro teams are sandbagging their interest in Shaw. NFL teams wouldn’t sandbag, would they?

The Obvious: The NFL will go anywhere there is a potential prospect.

The Not So Obvious: For those worrywarts concerned about former Trojans wide receiver George Farmer not being invited to the NFL Combine in Indianapolis this week, remember there is the upcoming Pro Day on the USC campus and there are also the private workouts. No, George will get his shot and figures to be in somebody’s training camp this summer.

The Not So Obvious: The Trojans marketing departing is really pushing the word “win” for the upcoming football season. FYI, if you are just “one of the guys” and not a support group person, two season tickets tickets for the upcoming season will cost over a thousand bucks. Whoa, since when do two Trojans season tickets cost over a grand and that’s not being part of a support group? At that price, the Trojans better win and win big.

The Obvious: Many fans are renewing their season tickets by phone because the Internet system continues to have some very annoying bugs in it.

The Not So Obvious: One Trojans fan renewing season tickets was surprised to hear the Trojans ticket representative repeatedly asking, “Would like to upgrade your seat location?” The rep was pleasant and just doing his job, but how many times does one have to say, “No thanks”?

The Obvious: It’s being reported that incoming Trojans safety Marvell Tell is no longer enrolled at Crespi High School.

The Not So Obvious: It might be something or it might be nothing, but Trojans fans will be eager to hear what’s going on with this talented prep star.

The Not So Obvious: Daelin proudly made some Twitter photos available as evidence of his appearance at USC. It looked like he was finishing a workout and commented on his Twitter site, “Gotta WORK if you wanna EAT. Had to get it in With the Best #FightOn #TrojanFamily.”

The Obvious: And finally, the Twitter photos of Daelin Hayes were taken in perfect Southern California weather ranging in the 70s.

The Not So Obvious: FYI, the weather in Detroit on Wednesday was a “warm” high of six degrees with low of three degrees, but the chill factor was only -13 degrees. Wowzers! Take that, Jim Harbaugh and Tim Drevno.