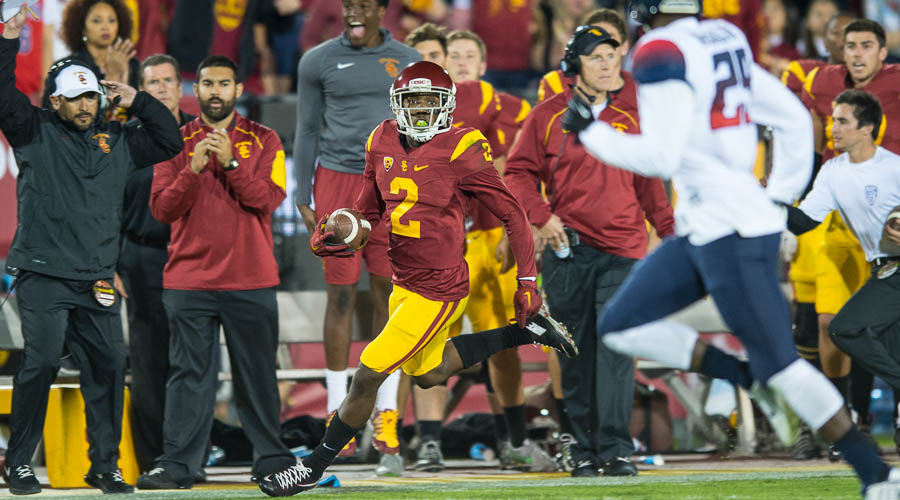 The Obvious: Last Sunday, the USC Trojans football program had its annual team awards dinner in USC’s tutor Campus Center, and while it isn’t on the level of the Academy Awards, it’s still a revealing insight into the program and allows the general public into a team’s self-evaluation.

The Not So Obvious: Here are a reflections and thoughts by the O/NSO looking at the award winners and their contributions to the 2015 Trojans.

The Obvious: The Mike McKeever Memorial Award given to the Most Valuable Player Award, which was presented to cornerback-wide receiver-returner Adoree’ Jackson (above photo).

The Not So Obvious: Certainly there is no better two-way player on the team, conference, or perhaps nationally. However, the O/NSO wonders about some other worthy names like All-Star wide receiver JuJu Smith-Shuster and quarterback Cody Kessler, once a Heisman Trophy candidate. The explosiveness of the Trojans offense revolved warrior Smith-Schuster and the leadership skills of captain Kessler. I might have gone with a “co” option given the circumstances.

The Obvious: The Davis-Teschke Most Inspirational Player Award was presented to center Max Tuerk.

The Not So Obvious: An interesting award. All-Pac-12 in 2014, Tuerk’s final season was destroyed by a knee injury; however, he remained a cheerleader for the team and a “graduate assistant coach” for his offensive line buddies. Sometimes true character comes out in the face of adversity.

The Obvious: The Trojan Way Leadership Award was presented to quarterback Cody Kessler.

The Not So Obvious: Forget about how effective Kessler was or wasn’t in his USC career, but there’s no argument that from a leadership standpoint he was a hands down winner. Having to deal and help keep his team together under sometimes the most absurd, ridiculous, and dramatic situations, he should always remembered for captaining a program that had more ups and downs than an elevator.

The Not So Obvious: Given to a senior that demonstrates dedication and commitment to the football program, both of these running backs are worthy recipients. For Madden, a star-crossed career of potential stymied by injury, and Pinner, a sometimes forgotten fullback, their commitment to contributing to the team was exemplary.

The Obvious: John Dye Memorial Award, presented to the Defensive Lineman of the Year Award, was awarded to tackle Antwaun Woods and defensive tackle Delvon Simmons.

The Not So Obvious: Both raised their game as the season progressed. Woods ended up All-Pac-12 and showed dramatic improvement throughout the season while Simmons played well enough to warrant NFL consideration.

The Obvious: The John Dye Memorial Award, presented to the Offensive Lineman of the Year, was given to offensive tackle Zach Banner.

The Not So Obvious: You talk about improvement, consistency, and character, Banner became the emotional leader of the offensive line and developed into an All-Pac-12 blocker. Banner thrilled everybody at the banquet announcing he would return to Troy for one more season and he makes no bones about it that he wants to be an All-American and have his plaque on the runway leading out of the John McKay Center to Howard Jones/Brian Kennedy Fields.

The Obvious: The Trojan Warrior Defensive Player of the Year Award presented to the defensive perimeter player that has the greatest impact on the perimeter was given to two-time All-Pac-12 linebacker Su’a Cravens.

The Not So Obvious: Seriously, a case could be made that Cravens was the team’s overall MVP. An All-American in every sense of the word, Su’a’s tell-it-like-it-is character and gifted athletic ability was not only refreshing but went a long way in stabilizing his team during the rough times. His early departure into the NFL leaves a huge crater that will be difficult to fill in 2016. He made the ultimate sacrifice for his team by playing linebacker instead of his natural position, strong safety.

The Obvious: The Trojans Warrior Offensive Player of the Year Award, presented to the player that has the greatest impact on the team, was handed to sophomore All-America wide receiver JuJu Smith-Schuster.

The Not So Obvious: Everything that could be said about JuJu has been said. Suffice to say, the kid is the ultimate warrior with a capital “W”. He continues to be the epitome of what an old-school USC football player is supposed to be. His battling through a myriad of painful injuries in 2015 to remain a major contributor on the field was beyond admirable. Enjoy him in 2016 because he’ll be in the NFL in 2017.

The Obvious: The Mario Danelo Special Teams Player of the Year was presented to fullback Soma Vainuku.

The Not So Obvious: A terror on special teams for a number of season. It figures that this special team assassin will take his skills into the NFL and perhaps follow in the NFL special teams footsteps of New England’s late Trojans great Mosi Tatupu. The only question mark in Soma’s career was why he wasn’t in the game more being used as a bruising running back?

The Obvious: The Service Team Players of the Year were quarterback Sam Darnold (offense), outside linebacker Don Hill, inside linebacker Joel Foy (defense).

The Not So Obvious: No surprise here with the dual-threat quarterback Darnold. He is a future star, and we saw glimpses in a real game what Don Hill was capable of doing. Hill could be a real sleeper in 2016. Foy should be recognized for helping challenge the game-day offense on a daily basis.

The Not So Obvious: Potentially the next great USC tailback, which will be dictated by the offensive system that Clay Helton uses in the future. In an I-formation with a quarterback under center, Jones could be an All-American and he might be one in the shotgun, as well. One thing the O/NSO knows, RoJo is the most explosive back since Reggie Bush and makes you hold your breath each time he gets his hands on the pigskin.

The Obvious: The Marv Goux Player of the Game vs. UCLA was presented to tailback Justin Davis.

The Not So Obvious: The Trojans have had a treasure chest of great running backs, and some were overlooked by the Heisman Trophy tailback winners. It could be said that Davis showed dynamic will to succeed by overcoming injuries and depth chart challenges. Justin finished the season as a real threat to be an All-Pac-12 back in 2016. He was relentless near the end of the season and reminded more than one historian of a former Trojans All-America tailback named Clarence Davis.

The Not So Obvious: Forget about his contributions to the team, Kolanz is one smart academic cookie and mature beyond his years. He might not draw an NFL paycheck on day, but he could be drawing some impressive financial number on the business end of football. A winner through and through.

The Obvious: The Bob Chandler Award, an underclassman with outstanding athletic ability, academic achievement and character, was presented to quarterback Max Browne.

The Not So Obvious: There is nobody on the Trojans the past two seasons that has been more patient and classy than Browne waiting his turn. A former National High School Player of the Year, Maxie has remained the loyal soldier behind Cody Kessler. Spring ball can’t come fast enough for Browne who figures to be the starting quarterback against Alabama in the 2016 season opener. He is a rare combination of ability, academic achievement, and character, boy, can he throw a deadly deep ball.

The Obvious: The John McKay Award, the underclassman with the most competitive spirit, was inside linebacker Cameron Smith.

The Not So Obvious: A tragic knee injury late in the season curtailed what had been one of the greatest freshman defensive performances in recent USC history. Despite finishing his first year for a surgeon’s table, Smith figures to come back strong in 2016 and eventually transitioning from a Freshman All-America to a veteran All-America candidate.

The Obvious: The Joe Collins Walk-on Award was presented to inside linebacker Reuben Peters.

The Not So Obvious: Rueben Peters? You’re probably asking who or what is a Reuben Peters? Well, Reuben, a redshirt freshman, hails from Los Angeles Loyola High and is an inside linebacker. He earned 2013 All-Serra League first team. He represents a long history of successful walk-on Trojans that have become instrumental in team success.

The Obvious: The Chris Carlisle Courage Award was presented to inside linebacker Lamar Dawson.

The Not So Obvious: You talk about the old saying that if Lamar Dawson didn’t have bad luck, he wouldn’t have any luck at all. Assigned the awesome responsibility of wearing the legendary No. 55 upon entering Troy, Dawson’s career was one big injury after injury and one system after system change. It was courageous that he showed relentless determination to come back from past injuries only to yet again be cursed with a shoulder injury late in the season that finished his Trojans career once and for all.

The Obvious: And finally, the Community Service Award was presented to safety John Plattenburg.

The Not So Obvious: You only have to meet Plattenburg once to know this kid is going places either in football or otherwise. Personable, engaging, and academically sharp, he certainly inspires his teammates by his actions and commitment to the community. Whether it’s representing the university at a hospital or as a role model for kids, Plattenburg is one of the Trojans most valuable representatives.