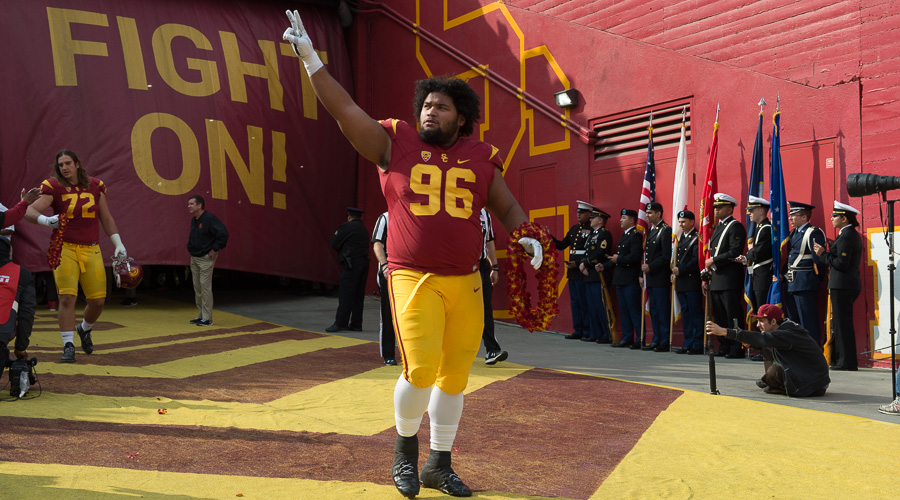 The Obvious: The Trojans have opened as a 6 ½ -point favorite to defeat Penn State in the 103rd Rose Bowl Game on Jan. 2nd.

The Not So Obvious: Part of that margin is the fact that the Rose Bowl is virtually a home game for the Trojans, although they’ll wear their road uniforms since Penn State is the higher CFP-ranked team. The Trojans figure to sleep in their own beds until after Christmas when they’ll stay at a downtown hotel in the week leading up to the Rose Bowl. Head coach Clay Helton has already said he will use all the allotted 15 days of bowl practice unlike last season’s Holiday Bowl practices.

The Obvious: Utah will be playing Indiana in the Foster Farms Bowl up in Santa Clara’s Levi’s Stadium on Dec. 28.

The Not So Obvious: You have to wonder how envious the Utes are of their former teammate and current Trojans nose tackle Stevie Tu’ikolovatu (photo above), the Utah grad transfer to USC who is not only playing in the 2017 Rose Bowl but was also named second-team All-Pac-12.

The Not So Obvious: Both teams played in bowl games last season…and lost. The Trojans lost to Wisconsin, 23-21, in the Holiday Bowl in San Diego while Penn State was downed by Georgia, 24-17, in the Taxslayer Bowl in Jacksonville.

The Obvious: There was great anticipation last Sunday morning to find out if the Trojans would make the 2017 Rose Bowl.

The Not So Obvious: Now that the Trojans are in the Rose Bowl, the great anticipation for USC season ticket holders is the great Rose Bowl ticket lottery. With tickets at $150 each and up to four ticket requests allowed per applicant, the deadline for the online lottery application is Dec. 18 with the lucky winners announced on Dec. 19. Talk about added stress! And if you’re a student, there will be no discount, as a student ticket will also cost $150. Zing!

The Not So Obvious: According to those that gave it the old college try, tickets were sold in the first three minutes of being made available. That should tell you how high a demand this Rose Bowl is being viewed.

The Obvious: With Max Browne gone as the Trojans backup quarterback for the Rose Bowl, Clay Helton has said that sophomore wide receiver Jalen Greene could be used at QB for the game.

The Not So Obvious: If he were needed, the O/NSO thinks that Jalen would certainly be serviceable. He has practiced many times as the Trojans quarterback, and don’t forget he was very good at Gardena Serra High. Although Clay Helton is hoping that starter Sam Darnold can stay healthy from now till after the Penn State game, Trojans fans should feel fortunate that a great athlete like Jalen is there if needed. If they can help it, no way are the Trojans going to burn the redshirt year of true freshman quarterback Matt Fink.

The Obvious: One of the benefits of going to the Rose Bowl is the school’s revenue intake from merchandise sold.

The Not So Obvious: Only hours after last Sunday’s official announcement that the Trojans were playing in the “Granddaddy of Them All,” Rose Bowl T-shirts, with the USC logo, were made available online.

The Obvious: The Trojans returning to the Rose Bowl has generated a huge amount of enthusiasm in Southern California.

The Not So Obvious: Going to a Rose Bowl is a reminder just how powerful this event is and what it can do to an image and a community. Although SoCal has tons of stuff to do, there is nothing like a local university playing in the Rose Bowl. The O/NSO received countless text messages and emails from Trojans fans screaming with excitement and asking if we could score some tickets. Good luck with that.

The Obvious: Kevin Bruce is a former “All-Pac-8” linebacker for the Trojans and a contributing writer to WeAreSC.

The Not So Obvious: Bruce, who was part of three Rose Bowls and two national championships while playing for legendary coach John McKay, was so fired up after learning the Trojans were returning to Pasadena that he texted the old O/NSO not long after Sunday morning’s Rose Bowl announcement and said he had already bought game tickets, placed a hotel reservation, and plane flight. You could tell the old USC linebacker still has the fire. Now if only he still had some eligibility.

The Obvious: Colorado will play Oklahoma State in the Alamo Bowl on Dec. 29.

The Not So Obvious: Certainly, Colorado would have preferred the Rose Bowl, but they know they had their shot. College Football Playoff spokesperson Kirby Hocutt told a national audience on ESPN last Sunday that making a decision between the Buffaloes and the Trojans was certainly debated. The O/NSO wonders how long that debate lasted, considering the Men of Troy defeated both Washington, the No. 4 seed against No. 1 Alabama, and Pac-12 Division champion Colorado. Can you imagine the television ratings for a Colorado/Penn State Rose Bowl? And consider that the Rose Bowl on ESPN is unopposed by other televised games. It figures that rating should be extremely impressive, not to mention the recruiting impact.

The Obvious: Pat Haden is the Trojans former athletic director.

The Not So Obvious: Ya think Haden is sleeping easier these days with the current success of the football and the basketball program?

The Obvious: Justin Wilcox is the Trojans former defensive coordinator.

The Not So Obvious: As the first-year Wisconsin DC, Wilcox certainly didn’t look for most of the season like the same coordinator he was at USC. Of course, that was until his Badgers defense played against a powerful Penn State offense. The O/NSO thinks that the Wisconsin secondary made the Penn State receivers look like they belonged in the NFL. Penn State, which has made a habit of playing great in the second half of games, turned Wilcox’s defense into the 2015 USC defense in the second half of the Big Ten Championship Game.

The Obvious: This was the final season of galloping for Traveler VII, the Trojans famous horse mascot.

The Not So Obvious: Traveler Vll is retiring after 14 seasons in the Coliseum. There will be a new Traveler in 2017. However, it would appear that this season’s Traveler Vll will get one last curtain call for the Rose Bowl Game and Parade. We should all retire with one final encore performance in the big spotlight. Not to worry, Traveler lX will be ready to gallop come 2017.

The Obvious: The last time the Trojans played Penn State in the Rose Bowl was 2009 and the Nittany Lions’ head coach was Joe Paterno.

The Not So Obvious: The O/NSO remembers the late coach at the annual Rose Bowl Disneyland media event, and it was obvious that “Father Time” had caught up with Paterno. He was cranky and had absolutely no patience. We always wondered if he was sicker than he let on. Of course, it wasn’t all that long until the PSU legend passed, but not after having to endure the Jerry Sandusky child molestation episode.

The Obvious: And finally, like all the current bowl games, the Rose Bowl has a title sponsor.