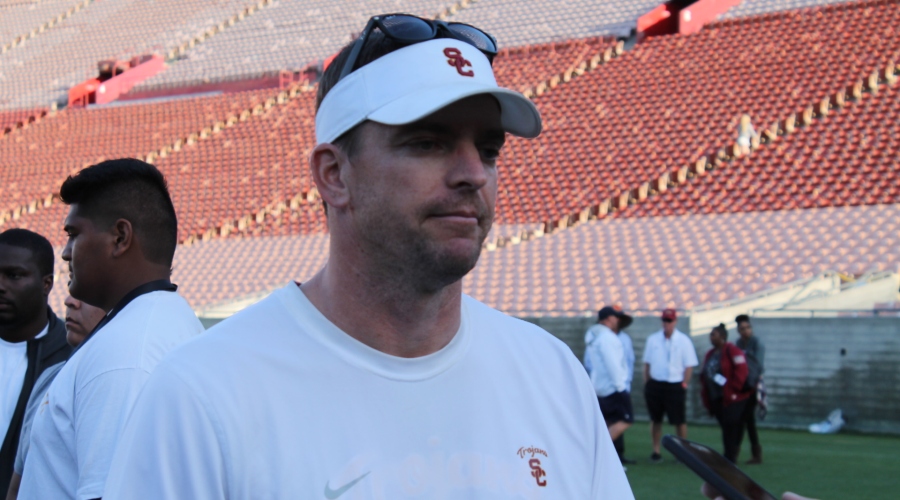 The Obvious: It’s USC’s Homecoming/Reunion Weekend on Saturday in the Coliseum (7:30 p.m. PT/ESPN), and the Trojans (5-3 overall, 3-2 Pac-12 South) would like nothing better than continuing their march to a possible Pac-12 South Division title by defeating the Arizona Wildcats (5-4 overall, 2-4 Pac-12 South) in front of alumni, friends, and fans.

The Not So Obvious: There is a good reason why the Trojans selected Arizona for its homecoming game. The reason is that Arizona has only beaten the Trojans four times in Los Angeles. The Men of Troy are also riding a two-game winning streak and are full of momentum while Arizona will be looking to rebound from last weekend’s devastating 49-3 loss at Washington.

The Obvious: The Trojans opened as 17 ½ -point favorites to defeat Arizona on Saturday in the Coliseum.

The Not So Obvious: The Trojans have won more than 75% of its games against the Wildcats—with just two losses since 2001—in a series that dates back to 1916. USC holds a 29-8 lead in its series with Arizona (not including Troy’s 2005 home victory that was later vacated due to NCAA penalty; original record 30-8).

The Not So Obvious: The ESPN broadcasters for Saturday’s night’s kickoff against Arizona will be Mark Jones (play-by-play), Rod Gilmore (analysis), and Quint Kessenich (sidelines).

The Not So Obvious: The Arizona broadcast can be heard on flagship station KCUB 1290 AM with the Brian Jeffries (play-by-play), Lamont Lovett (analyst) and Dana Cooper (sidelines).

The Obvious: The Trojans will be rooting for Utah to lose against Washington earlier in the day in Seattle, so that the Cardinal and Gold can regain control of their own destiny in the Pac-12 South.

The Obvious: Through eight games, the Trojans offense is averaging 37.4 points per game while the Arizona defense is allowing 34.2 points per outing.

The Obvious: The Los Angeles weather report for Saturday calls for mostly sunny with a high of 77 and a low of 53 degrees.

The Not So Obvious: The real weather report will be whether the Trojans can string their third victory in a row over a stumbling Arizona team that is coming off that humiliating loss to Washington in Husky Stadium. It’s not whether the Trojans can score a lot against a leaky Wildcat’s defense, but how much? Trojans quarterback Cody Kessler seems content to play second fiddle to the evolving, physical running attack, and we’ll see whether the Trojans use ball-control offense to keep the strength of this Rich Rodriguez team, mainly the Wildcats spread-option offense, on the sidelines. The Trojan may be without sophomore wide receiver JuJu Smith (right hand surgery), so whether that has an effect on the passing game is up in the air. The Trojans have other receivers like Steven Mitchell Jr. and the emerging Deontay Burnett, and perhaps Darreus Rogers (hamstring) to make up for Smith’s potential absence and take advantage of Arizona’s weakness in the secondary. The Trojans are also expected to use their three-headed monster of tailbacks (Tre Madden, Justin Davis, and Ronald Jones ll) to keep the clock rolling and making first downs. Whether Arizona’s defensive front, without All-America linebacker Scooby Wright, can stay physical with the Trojans newly aggressive offensive line will be a focal point.

Defensively, the Trojans will find out whether Arizona starting sophomore quarterback Anu Solomon bounces back from the Washington debacle. Rich Rodriguez admits that some of the Washington athleticism overwhelmed his team, especially on the edge, so we’ll see whether the Trojans can duplicate the Huskies efforts against the Wildcats. Depending on the game plan scripted by Trojans defensive coordinator Justin Wilcox (photo above), we’ll see whether Adoree’ Jackson is needed more on defense than offense this Saturday. The Wildcats have their own version of the spread option, and the Trojans linebackers will need to stay weary of Solomon handing the ball off, running the option, or throwing a pass. Against this type of attack, we’ll see whether true freshman inside linebacker Cameron Smith, who is still dealing with a tender hamstring, has learned how to deal with such an attack. The Trojans will have Bednarik and Butkus Award semifinalist outside linebacker Su’a Cravens ready to assist Smith, but whether Cravens arm injury at Cal is a factor is anybody’s guess.

The Not So Obvious: Talk is heating up with each Trojans win by Helton that if he could sweep the next four games he would be right there as a major candidate to be the next permanent Trojans head coach. Of course, one loss in the next four games would probably dampen his chances considerably, especially if one of those losses is to underdogs Arizona or Colorado.

The Obvious: The head coach of Arizona is Rich Rodriguez, who is in his fourth season with the Wildcats.

The Not So Obvious: Regarding playing the Trojans, Rich Rod, says, “It’s a team (USC) that obviously has that brand name, they’re playing at the Coliseum, it is a nationally televised game. Probably 100 percent of our guys weren’t recruited from them and a lot of them are from California so hopefully they have a little edge about that. More than anything, to go out and compete on that stage. I would be disappointed severely if we didn’t give our best effort just because of that.”

The Obvious: Since Clay Helton has assumed the responsibility of interim head coach, the Trojans offense has become more focused on the run.

The Not So Obvious: That doesn’t mean the Trojans have forsaken the pass. Trojans quarterback Cody Kessler still tops the Pac-12 this week in completion percentage and passing efficiency (both in the national Top 10). Kessler is also in the Trojans all-time Top 4 in TD passes, completions, passing yards and total offense. He is now above Heisman Trophy winner Matt Leinart’s school records for career completion percentage and interception rate, and this week he was named a finalist for the 2015 Johnny Unitas Golden Arm Award.

The Obvious: Against Arizona, the Trojans may be without sensational sophomore wide receiver JuJu Smith, who is healing from surgery early this week on his broken right hand.

The Not So Obvious: It will be mighty interesting to see how effective the Trojans passing game is if Smith can’t go. While the Trojans figure to have Steven Mitchell Jr., Darreus Rogers, and Adoree’ Jackson as the main targets for Cody Kessler, watch out for freshman Deontay Burnett, who might be the surprise of the year on offense as we head to the wire.

The Not So Obvious: The Arizona defense is spearheaded by senior safeties Will Parks and Jamar Allah and junior corner DaVonte’ Neal.

The Obvious: Last season in Tucson, the Trojans barely escaped the Wildcats, as placekicker Casey Skowron missed a game-winning 36-yard field goal with 12 second remaining, allowing the Men of Troy to hold on to a 28-26 victory.

The Not So Obvious: The last eight USC-Arizona games have been decided by a touchdown or less. Of the 37 meetings between the teams, 17 have been within a touchdown.

The Obvious: The Trojans currently have one player from the state of Arizona – reserve tight end Cyrus Hobbi.

The Not So Obvious: Arizona has 35 players from California.

The Obvious: The Trojans offensive line has been gaining respect despite all its injuries.

The Not So Obvious: Regarding the Trojans offensive line, Arizona senior defensive lineman Jeff Worth says, “They have a big O-line and they’re physical, but it’s not the size of the dog, it’s the fight in the dog. I think that is the mentality that we need this week heading into USC.”

The Obvious: The AFCA Coaches’ Trophy, which is awarded to the No. 1 team in the Amway Coaches Poll, will be on display this Saturday afternoon at the Coliseum.

The Not So Obvious: The trophy will be on display from 3-7 p.m. in the Trojan Fan Fest – located on Christmas Tree Lane, east of the Coliseum. Fans will be allowed to take pictures with the trophy.

The Obvious: And finally, during every Trojans home game, there are recognitions and celebrations during breaks in the game and at halftime.

The Not So Obvious: On Saturday evening, the Trojans will recognize its first Heisman Trophy winner, tailback Mike Garrett, on the 50th anniversary of his Heisman Trophy. The Trojans will also honor former Women of Troy soccer All-American Amy Rodriguez for helping the USA win the 2015 FIFA Women’s World Cup and ex-Trojan All-American Garrett Stubbs for winning the 2015 Johnny Bench Award as the top collegiate catcher.