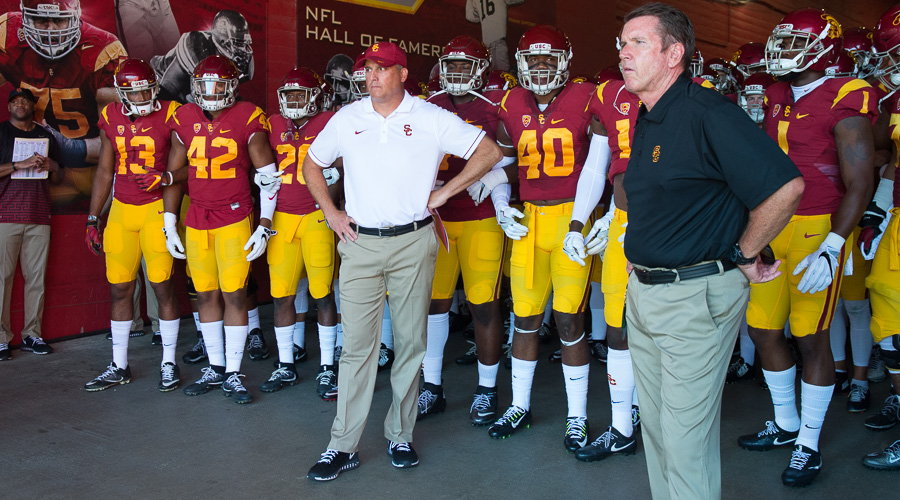 The Obvious: With just three games to go – all Pac-12 South Division games – the No. 17 USC Trojans (7-2, 5-1 Pac-12 South) and the No. 23 Arizona Wildcats (6-2, 4-1 Pac-12) will battle for sole divisional possession of first place Saturday night in the Los Angeles Memorial Coliseum (7:45 p.m. PT), and the winner will be tantalizingly close to capturing the divisional title, which would eventually punch a ticket into the Pac-12 Championship Game on Friday night, Dec. 1, in Santa Clara’s Levi’s Stadium.

The Not So Obvious: So, who would have thought at this point in the season that the Trojans would be playing Arizona for South Division race supremacy? The truth is that if the Trojans win on Saturday night, they’d have to lay one giant egg to mess up this golden opportunity not to capture the South Division. To simplify, if the Trojans defeat Arizona and then Colorado in Boulder next Saturday afternoon, the Men of Troy would mathematically be Pac-12 South Division champions, regardless of the final regular seasonal outcome with UCLA because they would hold the tiebreaker with both Arizona and Arizona State if need be. If the Trojans don’t defeat Arizona on Saturday evening, the Wildcats, who still have to play Oregon State, at Oregon, and at rival Arizona State, would place the Cardinal and Gold into the unpredicatable scenario game.

The Obvious: The Trojans opened a nine-point favorite over Arizona, which currently has a four-game winning streak.

The Not So Obvious: With the type of offenses that both the Trojans and the Wildcats possess, the Coliseum scoreboard could light up like the Las Vegas Strip. It would be hard to imagine either offense being stopped for any significant measure of time. The Trojans are 5-0 against Arizona when both clubs are ranked in the AP Top 25 poll. The Trojans have also won their last 14 home games and have lost only twice to Arizona since 2001. Arizona has beaten the Trojans just four times in Los Angeles, but nearly half of the series between the two schools have been decided by eight points or less.

The Obvious: Saturday night’s game featuring the Trojans and Wildcats will be nationally televised on ESPN (7:45 p.m. PT/ 10:45 p.m. ET).

The Not So Obvious: The ESPN broadcasters for Saturday night’s game will be Mark Jones (play-by-play), Rod Gilmore (analyst) and Quint Kessenich (sideline).

The Not So Obvious: The Arizona broadcast can be heard on flagship station KCUB (1290 AM) with Brian Jeffries (play-by-play), Lamont Lovett (analyst), and Dana Cooper (sidelines).

The Obvious: (UPDATED) Saturday’s Los Angeles weather forecast calls for mostly sunny with a high of 68 degrees, a low of 58 degrees, 67 percent humidity, and 0 percent precipitation.

The Not So Obvious: The real weather report is whether the Trojans can take the momentum from last Saturday night’s big win at Arizona State and apply it to this Saturday’s game with Arizona. With this being Troy’s Homecoming Game and Reunion Weekend, Clay Helton’s Trojans will get plenty of support inside the Coliseum, although the late-night kickoff (ugh) could persuade some fans to stay home and watch the affair on ESPN. We’ll see whether the Trojans come out with their most focused mindset of the season, given the fact this is the biggest game of the season and all that’s at stake. We’ll find out whether the Trojans’ offensive line can control the Wildcats’ defensive front. If the Trojans O-line can establish the same type of dominating blocking performance as displayed at ASU, the Cardinal and Gold should be in good shape. It figures that USC’s offensive side of the football will be eager to continue what they displayed last weekend in Tempe, and ball control and time of possession will be paramount. We’ll see whether the Trojans’ young group of receivers, led by redshirt freshman Tyler Vaughns and Michael Pittman, can continue to show growth and be a major factor on Saturday. We’ll also find out whether the Wildcats’ defense can stop the lethal duo of Trojans’ quarterback Sam Darnold and tailback teammate Ronald Jones ll. If both Darnold and Jones are on point, the Wildcats’ defense will be on roller skates. We’ll also see whether Wildcats’ head coach Rich Rodriguez can come up with a restricting defense, and whether he’ll try and copy the Notre Dame defensive template. It also remains to be seen whether Darnold will start consistently connecting with his 2016 favorite tight end target, Daniel Imatorbhebhe.  The Wildcats, however, have some stoppers on defense like corners Lorenzo Burns, a redshirt freshman, and junior Jace Whittaker and true freshmen linebackers Tony Fields ll and Colin Schooler, the former local Mission Viejo (Calif.) High star.

Defensively is where the Trojans will have their hands full. In Wildcats’ sensational sophomore dual-threat quarterback Khalil Tate (6-2, 215), it could be a nightmare scenario trying to contain the explosive signal caller, especially with his running skills. And don’t be misled, Tate can also throw the ball with authority, as well. We’ll see whether Trojans’ defensive coordinator Clancy Pendergast can shut off Tate’s ability to ravish the Trojans’ defense with his legs and at the same time limit the passing damage. Obviously, stopping Tate will be the No. 1 issue and a major key to the game. If the Trojans can’t get the ball out of Tate’s hands before he hits a hole, it’s going to be a long Homecoming evening in the Grand Old Lady. And Arizona also has two fine running backs in redshirt freshman J.J. Taylor and senior Nick Wilson. Wildcats’ head coach Rodriguez has always been considered an option offense genius, and you can be sure he will come up with a game plan that will thoroughly challenge Pendergast’s defense. And don’t forget, last weekend the Arizona offense hung 58 points on a Washington State team that had earlier defeated the Trojans 30-27 in Pullman. For you math majors, that’s 28 points more offensively than the Trojans were able to put on the Cougars. It certainly helps, however, that the Trojans’ defense has already played a lethal quarterback in Notre Dame’s Brandon Wimbush. Come to think of it, we’ll find out whether the Trojans’ defense learned anything playing Wimbush that they can use to stop Tate. However, we’ll see whether the loss of standout linebacker Porter Gustin (toe) for yet another game plays a part in defensing the Wildcats and Tate.

The Obvious: The 2017 Trojans’ offense averages 33.67 points per game while the Arizona defense is allowing 30.25 points per outing.

The Obvious: Arizona head coach Rich Rodriguez, who was under scrutiny early in the season, is now in his sixth season as the head coach of the Wildcats.

The Not So Obvious: Assessing the game with the Trojans and USC tailback Ronald Jones ll, Rodriguez said, “All the southern California players know each other. Khalil (Tate) has a few friends who play defense for them. From that standpoint, the Southern California games are huge for them because they know a lot of those guys. For us, USC was picked to win the league and be in the playoffs. They play really good football and looked great on Saturday night (against ASU). In their house and a big-time atmosphere, it should be a lot of fun.”

(On Ronald Jones) “He’s a freak. Athletically, the way he can get to full speed. There some backs, and we’ve got some of them, JJ (Taylor) in particular, who gets to full speed in a hurry. He (Jones) gets to full speed in a hurry. His fast is fast. He’s a big physical guy, and when he’s not in there and they put somebody else in, it looks like the same dude. I think he’s one of the best in the country, not just the league, but the country without question.”

The Obvious: There are many diverse opinions on who will win Saturday’s game.

The Not So Obvious: Bleacher Reports’ Kerry Miller writes, “The big variable to watch in this one is Arizona’s defensive TD-INT ratio. The Wildcats have allowed more than 300 passing yards per game, but they have 14 interceptions against 11 passing touchdowns allowed. Darnold has had more than his fair share of interception woes this season, but he should lead the Trojans to victory in this one.” Bleacher Report predicts USC 42, Arizona 37.

From CBS sports, Jerry Palm says, “I am riding the Khalil Tate bandwagon. Arizona has been on fire since installing the hyper-athletic Tate at QB, winning four straight and hasn’t scored fewer than 45 points since. When your offense is lighting it up like that, you always have a chance. Also, USC has not exactly been what we thought it would be, despite a good week for the Trojans last time out.” CBS Sports predicts Arizona by 7.

Sports Illustrated’s Joan Niesen writes, “Even though Arizona ripped off four straight wins in October, I’m not sure it has enough to go into Los Angeles and beat USC at home, especially if the Trojans can sustain the offensive balance they used to put up 48 points in their win over Arizona State last week.” No score is predicted.

The Not So Obvious: Tate, a graduate of local Gardena (Calif.) Serra High, has done for Arizona what Sam Darnold has done for the Trojans. Khalil rushed for 146 yards against Washington State last week, giving him four-straight 100-yard games. He’s the first Wildcat with four in a row since Nick Wilson in 2014. BTW, Tate was recruited by Clay Helton as a Trojans quarterback and athlete.

The Obvious: The USC/Arizona series began in 1916.

The Not So Obvious: The Trojans lead the series 31-8.

The Obvious: Television and cable love to show USC games because of the large Southern California population.

The Not So Obvious: The Trojans have appeared on live national, regional, or local telecasts 499 times, which means that Saturday’s game will be appearance No. 500 for the Men of Troy.

The Not So Obvious: Arizona has 45 players on its roster from California.

The Obvious: And finally, for every Coliseum home game, the Trojans honor and/or recognize various people or groups during various breaks in the action.