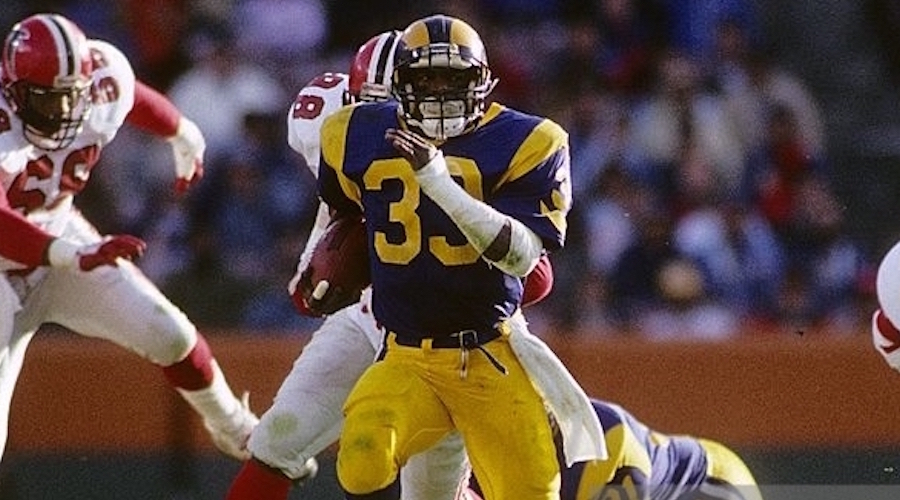 The Obvious: The Los Angeles Rams pro football franchise has returned from St. Louis, and will share with the USC Trojans the Los Angeles Memorial Coliseum, an historic venue that for decades was once the simultaneous home of both football programs.

The Not So Obvious: Besides sharing the Coliseum, the Trojans and the Rams not only have shared players but head and assistant coaches, as well. It was a major story in 1983 when Trojans head coach John Robinson decided to leave Troy and become the head coach of the Rams. Robinson, who finished his stint with the Rams in 1991, also brought some of his former Trojans coaching staff, which included legendary defensive and offensive line coaches Marv Goux and Hudson Houch, respectively, running backs coach Bruce Snyder, and special teams coach Gil Haskell.

The Obvious: That Trojans/Rams connection ironically still continues with the arrival of the “new” Los Angeles Rams under the direction of head coach and former Trojans corner Jeff Fisher.

The Not So Obvious: Of course, Robinson and Fisher are just the head coaching aspects of the Rams. There have been many many Trojans that have played under the title of Los Angeles Rams. Listed below are a number of the notables and not so notables that transitioned at some point from wearing the cardinal and gold to the Rams original blue and white and yellow.

The Obvious: Rudy Bukich is a former Trojans Hall of Fame quarterback who led his team to a 1953 Rose Bowl Game victory over Wisconsin and was named the game’s MVP.

The Not So Obvious: Bukich was selected in the second round of the 1953 NFL draft by the Rams and was with L.A. in 1953 and again in 1956, the separated years due to military service. Bukich was eventually traded to the Chicago Bears and in 1965 he was named second-team All-Pro.

The Obvious: Pete Beathard is a former Trojans All-Conference quarterback who led the Trojans to the 1962 national championship.

The Not So Obvious: Beathard played for the Rams in 1972 and backed up former Rams quarterback great Roman Gabriel. Beathard was traded to the St. Louis Cardinals from the Houston Oilers in 1970, and then on to the Rams in August 1972. In 1972, Pete actually started two games as the Rams quarterback against Chicago and Atlanta.

The Obvious: Jon Arnett is a former 1955 Trojans All-America running back.

The Not So Obvious: “Jaguar Jon” was drafted in the first round of the 1957 NFL draft by the Rams and played for L.A. from 1957 to 1963. A member of the Pro Football Hall of Fame, Arnett was a five-time Pro Bowler for the Rams and is considered one of the Trojans and the Rams greatest running backs.

The Not So Obvious: Although he spent most of his NFL Hall of Fame career with the Minnesota Vikings, Ron did spend the final season of a glorious career with the Rams in 1982. Believe it or not, the Vikings eventually traded Yary to the Rams for a 10th draft pick. Ron is a coveted member of both the College and Pro Football Hall of Fame.

The Not So Obvious: A first round selection by the Rams in the 1969 NFL draft, Bob appeared in 14 games in his rookie season with L.A. He was primarily a blocker in the Rams ground game. He played for the Rams from 1969 through 1976 and spent seven seasons as the Rams starting tight end. In a 1985 vote of the fans, Klein was named as the tight end on the Los Angeles Rams 40th Anniversary Team.

The Obvious: Al Cowlings is a former Trojans All-America defensive tackle that was a key member of the famed 1969 Wild Bunch.

The Not So Obvious: Originally drafted in the first round of the 1970 NFL draft by the Buffalo Bills, Cowlings became a member of the Rams in 1975 and remained in Los Angeles through the 1977 season.

The Not So Obvious: Not originally drafted by the Rams, Jeter was traded to the Rams from the New York Giants in 1983 and continued his career locally through 1982. He was a standout pass rusher with the Rams. In 1985 with the Rams, he was voted Comeback Player of the Year. In that comeback season, he recorded five sacks in one game against the Los Angeles Raiders.

The Obvious: Pat Haden is a former USC quarterback that led USC to the 1974 national championship.

The Not So Obvious: After playing one season in the World Football League, Haden entered the NFL  with the Rams in 1976 and his career continued in L.A. through the 1981 season. During his tenure, Haden was selected to the Pro Bowl in 1977, and a season earlier (1978), he was named the Washington D.C. Touchdown Club NFL Player of the Year.

The Not So Obvious: Originally drafted in the first round by the Cleveland Browns in 1980, White’s career was reborn in 1985 when he came back to Los Angeles and was reunited with his old college coach John Robinson, who was now head coach of the Rams. White became the NFL Comeback Player of the Year in 1987. In that season, White rushed for a league-leading 1,387 yards and 11 touchdowns, which also earned him a Pro Bowl selection, as well.

The Obvious: Tony Slaton is a former 1983 Trojans All-America center.

The Not So Obvious: Slaton was picked up as a free agent by the Rams in 1985 and remained with the club from 1985 through 1989. During the 1985 season, when starting center Doug Smith was injured, Slaton was inserted into the starting lineup. Slaton also spent some time at guard and became a valuable utility man. He started 15 games for the Rams.

The Obvious: There have been many other former Trojans that have spent time playing for the Los Angeles Rams before the franchise moved to St. Louis.

The Obvious: And finally, with their return to the City of Angels, the Rams will again reunite with Trojans in forging a new relationship amongst players and possibly coaches.

The Not So Obvious: As for the 2016 season, the Rams have made the Trojans/Los Angeles Rams homecoming a reality. Besides head coach Jeff Fisher, former Trojans safety T.J. McDonald is a current member of the “returning” L.A. Rams. The question now becomes just how many more future Trojans will be part of the Rams as they return to the Coliseum and then eventually to the future stadium in Inglewood?