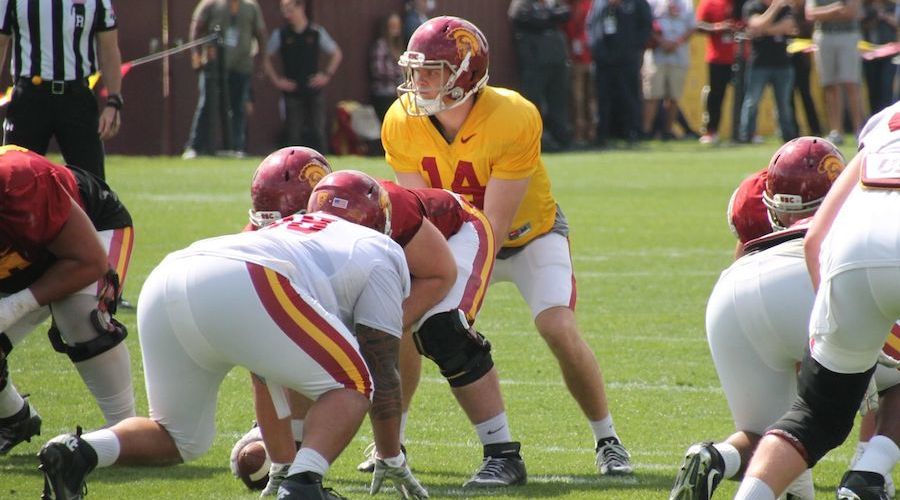 The Obvious: While most Trojan football fans were expecting Saturday’s USC Spring Game in the Coliseum (noon PDT) to be a game-like experience, due to an overabundance of recent injuries it was decided by Trojans head coach Clay Helton to dramatically change the day’s original format from a controlled “real live game” to a “very practice like” series of non-scoring segments of drills and “situational football.”

The Not So Obvious: To offset any fan disappointment over the change in the spring game format, the O/NSO says if Trojans fans are still looking for a fun football fix, a goodtime tailgate experience, and plenty of fan friendly events and recognitions, you won’t be wasting your time taking in the proceedings. There will still be hitting and live tackling, but the circumstances require discretion over valor and the long-range projection that what really counts is what happens on Sept. 2 when the Men of Troy host Western Michigan in the season opener.

The Obvious: Although a significant number of players will be unable to participate on Saturday, nevertheless, Trojans fans will be coming to watch the gifted one, or have you forgotten No. 14, sophomore quarterback Sam Darnold (photo above), considered by many the premier collegiate quarterback in America and the early 2017 Heisman Trophy frontrunner?

The Obvious: It’s expected that close to 25,000 fans –give or take – will be at the Coliseum on Saturday for the spring game.

The Not So Obvious: Admission to the spring game is $10 per person with all kids 12 and under free. Coliseum gates will open at 11 a.m. Parking will be available in Coliseum Lots 4 – 6 for $15.

The Obvious: Saturday’s spring game from the Coliseum will be telecast live on the Pac-12 Networks and Pac-12 Los Angeles (noon – 2:00 p.m. PDT).

The Not So Obvious: Calling the Pac-12 Networks action will be Ted Robinson (play-by-play), Yogi Roth (analyst), and Jill Savage (sidelines). Radio ESPNLA 710 will also air the events live with Jordan Moore and John Jackson.

The Obvious: The Los Angeles weather report for Saturday’s noon spring game calls for sunny with a high of 76 degrees.

The Not So Obvious: The real weather report will be whether the offense can move the ball with some consistency given the fact the offensive line is missing starting offensive right guard Viane Talamaivao and probable O-line starters Chuma Edoga and Toa Lobendahn. That being said, the real attraction on Saturday is quarterback Sam Darnold (No. 14), and he figures to excite the masses. We’ll also see whether the Trojans Bookstore will be selling No. 14 jerseys at the Coliseum. Trojans fans should be interested in watching Darnold’s backups Matt Fink (No. 19) and Jack Sears (No. 13), a redshirt freshman and true freshman, respectively. As for the wide receivers, we’ll see whether talented but young inexperienced receivers like sophomore Michael Pittman Jr. (No. 6) and redshirt freshmen Tyler Vaughns (No. 21), and redshirt freshman Velus Jones Jr. (No. 23) can make plays against the No. 1 defensive unit.

In terms of running backs, you know the names and numbers beginning with junior all-star candidate Ronald Jones ll (No. 25), but real focus should be on redshirt freshman tailback Vavae Malepeai (No. 29), who has looked very good during spring. Along the offensive line, check out sophomores Roy Hemsley (No. 63) and Clayton Johnston (No. 76), sophomore center Cole Smith (No. 66) and redshirt freshman center Frank Martin ll (No. 65).

On defense, all eyes should be on the defensive line, especially true freshman nose tackle Marlon Tuipolotu (No. 51) who could very well be the starter next fall. Also pay  close attention to senior Josh Fatu (No. 98) who is strongly in the mix. Junior Cameron Smith will start at one inside linebacker spot, but Trojans fans would be wise to watch the comparative performances of Smith’s inside partners, sophomores John Houston (No. 10) or sophomore Jordan Isoefa (No. 56) who has come on strong during the spring. The secondary examination should be trained on sophomore corner Jack Jones (No. 1) who has been working hard in his approach to the game and his fundamentals.

Another area of scrutiny is whether the Trojans kicking game. With kicker Matt Boermeester looking extremely doubtful for next season or for the far future, it’s time to turn your attention to redshirt freshman Michael Brown (No. 49). Brown has had some good moments and some learning ones, as well. We’ll see how he reacts to a large Coliseum gathering.

The Obvious: Defensive coordinator Clancy Pendergast will be looking on Saturday to see that his system is working efficiently.

The Not So Obvious: When asked what his expectations are for the spring game, Pendergast said, “We want to be obviously fundamentally sound, assignment sound. We’re looking for good communication out there with all the groups that get an opportunity to play.” Aside from the usual suspects on defense, when asked about some newer names on defense that fans might want to focus in on Saturday, Pendergast said ILB Jordan Iosefa (No. 56), OLB Oluwole Betiku (No. 99), ILB John Houston Jr. (No. 10), and CB Jack Jones.

The Obvious: The leader of the 2017 Trojans defense is expected to be junior inside linebacker Cameron Smith (No. 35) who DC Clancy Pendergast says really “jumped out at me” this spring because of Smith’s performance and leadership.

The Not So Obvious: Asked about his expectations for Saturday’s final spring practice, Cameron Smith told the O/NSO, “It’s been two years since I’ve played in my last one (spring game). I hope to see us end on a good note and play assignment-based football. Hopefully, we’ll fly around and have fun. We need to just keep getting better and one more good practice to finish it off. It will be awesome to see a good amount of people out there.”

The Obvious: Tee Martin is the Trojans’ second-year offensive coordinator.

The Not So Obvious: When asked by the O/NSO to throw out some fresh names that fans should keep a close watch on Saturday, Martin suggested fans pay attention to wide receiver newcomer Tyler Vaughns and sophomore Michael Pittman Jr., redshirt freshman tight end Cary Angeline (No. 86), sophomore offensive tackle Clayton Johnston, and running back Vavae Malepeai. Tee said that Malepeai has been truly outstanding this spring. The OC said he would be looking for clean execution by his offense on Saturday.

The Obvious: You could make an argument that redshirt freshman Vavae Malepeai (6-0, 210) was the top running back in spring camp.

The Not So Obvious: When asked about Saturday’s upcoming spring game, Malepeai told the O/NSO, “I want to get better and learn more about the offense and get used to the speed of the game. I just want to do the best I can do. I think this spring I played pretty decent. Like anything, there is a lot to improve on. From where I stand, I am nowhere near where I want to be. I would describe my running style as physical and fast. I ran a 4.5 (40 time) in high school (Mililani High/Aiea, Hawaii).”

The Obvious: The spring game will also feature a fan fest.

The Not So Obvious: Among the fan fest activities, there will be inflatables, carnival games with prizes, and other fun stuff located on the concourse near the Peristyle. Sometime during the spring game, there will be a punt catching competition with selected fans.

The Obvious: The spring game allows fans to take photographs of their heroes and other notables.

The Not So Obvious: There will be a photo booth for fans, so all you folks coming in cardinal and gold might want to visit the concourse near the Peristyle to have a keepsake picture.

The Obvious: There will be a number of spring game presentations during the course of the afternoon.

The Not So Obvious: Among the presentations will be recognition of the record setting, 26-win USC Men’s basketball Team, the unveiling of the 2017 Rose Bowl Game rings to last season’s senior members of the team, and something new, a welcome to the members of the Trojans top five ranked 2017 football recruiting class.

The Obvious: The spring game will allow fans to purchase the 2017-2018 USC Kids Club Package.

The Not So Obvious: The package includes a replica USC football jersey, USC basketball player piggy bank, headphones, cereal bowl, and tickets to select USC athletic events. Regularly priced at $30, the spring game will allow a discounted package for $20.

The Obvious: There will be a special souvenir section for fans to purchase items at a reduced cost.

The Not So Obvious: Located by Tunnel 4 on the concourse level, fans are invited to visit the $5 table where most items will be $5. Items will include shirts to flip flops to water bottles. Also represented will be the USC Bookstore, which will have a couple of Coliseum locations and will provide a huge selection of the newest official Trojans merchandise during the game.

The Obvious: And finally, perhaps the biggest winner at the spring game will be the post-game USC player autograph session for fans, which will be located on the floor of the Coliseum.

The Not So Obvious: Fans will have the opportunity to get up to 20 autographs just by standing in one line. More information regarding the autograph session will come during Saturday’s events, and you should be informed where your favorite player will be sitting during the autograph session. Think that Sam Darnold just might be in high demand?