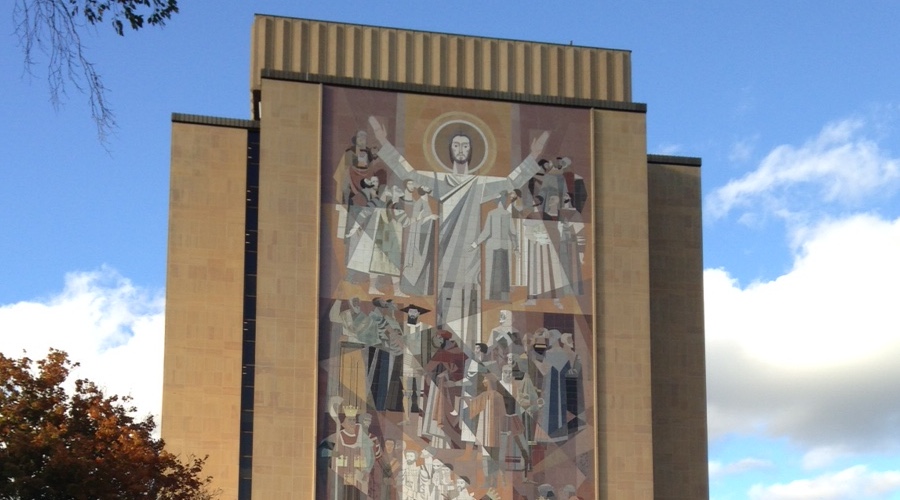 Now comes the ultimate to the Notre Dame Weekender, the pregame festivities on the Notre Dame campus leading up to the kick-off. Since it’s a night game (7:30 in South Bend), fans from both teams will use up the entire day to party. What’s it like? Well, come along for the ride in your heated home in anticipation of a very cold evening in northern Indiana.

10:30 a.m.: No wakeup call for me. I am staying in Elkhart, Indiana, about 25 minutes east of Notre Dame at the Candlewood Inn. The room is equipped with a kitchen and is really a studio apartment. So I revert back to oat bran for breakfast.

11:30 p.m. I plan on heading to Notre Dame around 2:30 in the afternoon. I think I’ll kick back and watch some football. BTW, it’s 45 degrees with a “feel’s like” of 39. I could be wrong, but I do think weather will play a factor, especially since it’s been so hot and humid in Los Angeles.

12:27 p.m.: Watching Florida State and Louisville, FSU quarterback is Everett Golson, the former Notre Dame quarterback who took the Irish to the 2013 BCS National Championship game against Alabama. Think the Irish would still like to have him as their quarterback. Honestly, I am not so sure. He became a turnover machine late in his career.

2:30: Head out to South Bend, and, burr, it’s really an icebox out here. Anybody for a popsicle because I feel like one? Traffic on the Indiana Toll Road is clear and moving smoothly. Oh no, raindrops are falling on the windshield, and it is extremely windy. Most of the traffic is coming from the opposite direction, which would be Chicago. Many Trojans fans will be coming from The Windy City on charter busses or taking the South Shore Line, which is a train from Chicago and ends in South Bend.

2:50: It figures that Exit 77, the off-ramp for Notre Dame, will be very busy. Getting into ND on a game day is like driving into the Rose Bowl. As bad as it is to get in, it’s worse to get out because everybody leaves at once. It could be worse tonight because it will be a freezer after the game is over, and nobody figures to hang around too long.

3:00: Traffic along Michigan Street off Exit 77 is starting to slow up The big chink in the driving armor is making a left on Angela Street, which brings a long line of cars and busses. You might have to re-shave waiting to make a left from Michigan to Angela Street. Once heading down Angela Street, which is a residential street separated on the left by the Notre Dame golf course and residential homes on the right. There are a number of folks holding tickets for sale in the air. I have a media parking pass, but it’s still no walk in the park trying to navigate the mass of vehicle humanity. Public parking is going for $20 at St. Mary’s College and $30 dollars on the grass and streets of residential areas across from ND.

3:30: Parking and tailgating is combined just outside the media, and I need to follow a Cadillac through the maze of tailgaters. A ND rep with a yellow flag is clearing the path of tailgaters for my car to get to a space. There is smell of BBQ and it is an anthill of humanity surrounding the stadium. Exciting but one has to be very careful driving through the masses.

3:45: My parking spot is the best I’ve had at Notre Dame. I am not far from the media entrance. There is massive construction in and around the stadium. There is a new press box being built on the other side and it’s located higher than the present facility.

3:55: Walk through the construction zone and a press box elevator takes me to the fourth floor of what is an absolutely first-class press box. I am seated in the front row between the 45 and 50-yard line. The working area is wonderful, as there is plenty of space to do your job. Behind one’s seat, there is a hook to hang a jacket or backpack. The press box has enlarged Sports Illustrated and Sporting News cover photos and one is of USC’s Matt Leinart and ND’s Brady Quinn for the 2005 classic. Obviously it was shot the week of the game.

4:00: I won’t make the same mistake twice and decide to eat before I go out on campus. Temperature in the press box is around 70 degrees and no wind. The food menu is chicken sandwiches, macaroni salad, chips, soup, fruit, and the usual soda dispenser.

4:22: Descend back down the elevator to do a little walking tour of the campus to check the pulse and watch the teams come in. Oh, and I will be wearing my down jacket over my hoodie and wearing gloves.

4:30: The Golden Dome is glistening like a recruiting postcard.

4:37: A contingent of USC fans is strolling by with bags full of souvenirs from the ND Bookstore. Surprisingly, the campus seems rather quiet. Where is everybody? There was more action in the parking lot for tailgating even with these elements.

4:40: Dark clouds come overhead. It seems like any moment now The Four Horsemen are going to descend from the Indiana heavens.

4:50: A USC family walks by and dad is wearing a cardinal “Play Like A Trojan” shirt, an obvious mocking of the Notre Dame sign “Play Like A Champion,” which hangs above the stairs of the home locker room that leads down to the field.

4:53: Standing in the middle of campus, there are relatively few fans, an area that usually has a lot of activity. Am I missing something? An American flag high atop a pole is waving at full wave. A lone member of the Notre Dame Marching Band walks by like she doesn’t know where everybody went.

5:00: The famous Grotto at Notre Dame has activity. Folks are lighting candles and it is very serene. It is a time for reflection and not for football. By the way, beneath the Golden Dome there are cardinal and gold flowers. Go figure.

5:10: Walk into LaFortune Hall, the Irish student union. There is a lot of activity and a number of USC fans. Most are watching the Michigan/Michigan State game on a giant TV. The food court has some options like Burger King and Subway, but the biggest line is for Starbucks. The walls are adorned with photos of ND coaches like Knute Rockne, Ara Parseghian, Lou Holtz, and Frank Leahy. There is a huge photo on one wall of the 1988 ND National Champions. The Notre Dame school newspaper, The Observer, has a whole edition devoted to the game. All five writers pick the Irish by a comfortable margin…shocking.

5:13: Walking out of the student union, a ND student is walking her dog who is wearing an “ND” dog collar. The dog and apparently the student could care less of the nations’ greatest intersectional collegiate football rivalry. A USC fan screams out, “Fight On!” and it catches everybody by surprise.

5:22: Finally I have found where everybody is. The bulk of fans are on the mall between “Touchdown Jesus” and the stadium. They are listening to the Irish Glee Club singing Notre Dame songs in acapella. Honestly, it’s really beautiful. Now a spirit tunnel of Irish fans spans about 500 yards. It’s very impressive. A young USC fan stands in the spirit line wearing a cardinal and gold jersey with No. 5 on the front and “Bush” on the back. Ya think that got a couple of double-takes?

5:24: An ND woman, wearing an Irish cap, is selling tickets and is willing to sell them for under $100. A new USC spirit line is forming next to the Notre Dame spirit line and an ND fans says, “I am glad they (USC) don’t have Pete Carroll anymore. He brought an attitude and so did his team.” The spirit line for USC grows and while not nearly as long as the Irish, there are only about five yards separating the two factions.

5:30: The Irish team arrives preceded by kilted bagpipers playing. Honestly, I’ve never seen an Irish team play the Trojans that didn’t look so happy. More than half the ND team is smiling. Maybe they think they’ve got this one in the bag. Quite honestly, it’s dumbfounding.

5:35: An Irish family turns their attention to the Trojans spirit line and the father says to his daughter, “Remember honey, when the Trojans walk by, make sure you boo them as loud as you can.” The daughter nods her head and smiles.

5:38: The Trojans arrive and the noise level elevates considerably as one sides cheers and the other side boos. The Trojans players have an assortment of expressions. The Indiana State Police try to keep the crowd controlled along with the ND Stadium staff. Let’s get ready to rumble!

5:39: Leading the Trojans through the intense spirit line is interim head coach Clay Helton, who is giving the two-fingered Fight On sign and yells “Fight On!” Linebacker Anthony Sarao claps his hands and nods his head. Offensive guard Damien Mama shakes his head “No” to the Irish fans. Offensive line coach Bob Connelly stares straight ahead and says, “We’re doing it, baby.” Reserve center Khaliel Rodgers flashes a “Fight On” sign, and offensive tackle Zach Banner grins while wearing what appears to be a yellow lei. The most serious of the group is quarterback Cody Kessler, who looks like he is ready for the biggest challenge of his career.

5:43: Walking in last with what appears to be his family and holding the hand of a little girl is Trojans athletic director Pat Haden, who too looks like he has the weight of the world on his shoulders.

5:45: Both teams are now in their respective locker rooms. I head back up to the press box with LA Times Trojans beat writer Gary Klein and we both agree that it’s really hard know what to expect of the Trojans given the circumstances. The Irish might also agree.