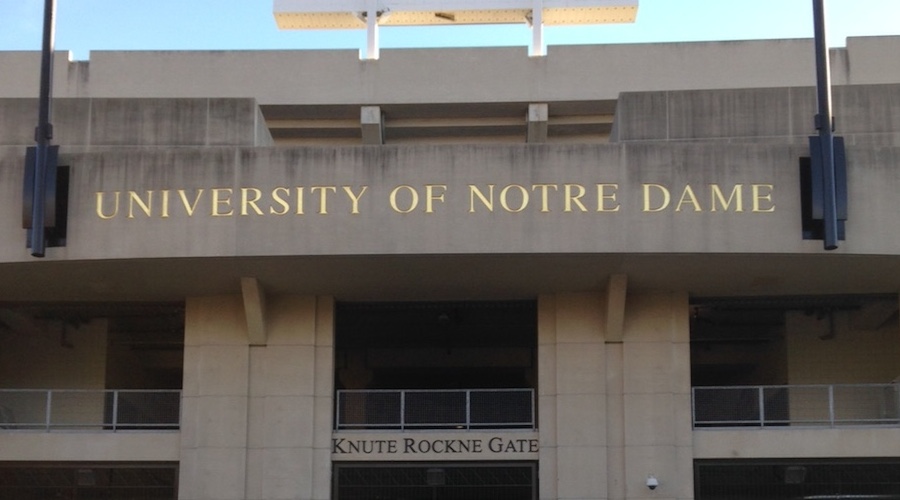 So you think the Notre Dame evening pep rally in anticipation of the 87th renewal of the nation’s greatest intersection collegiate football game, USC vs Notre Dame, isn’t important? Well, think again, my friends. The Irish are fired up, and they’re not saying very nice things about your cardinal and gold heroes.

2:50 p.m.: After writing about the Trojans Navy Pier noon pep rally, I remember that South Bend is on Eastern Daylight Time, which means it’s already 3:50 in South Bend, and I don’t even have time to grab a bag of Garrett’s caramel popcorn let alone eat lunch. Does it get any worst than that? Yeah, it does – the Chicago freeways on a Friday getaway day. I scramble quickly to get out of the Navy Pier parking structure and begin the next segment of the Notre Dame Weekend – the Notre Dame campus.

3:20: Once you get out of the Chicago city limits and its Shoreline Drive traffic and enter on the Indiana Toll Way with all its wonderful tolls, it’s a beautiful drive past farms, rivers and stream, and leaves that are beginning to turn those beautiful fall colors. It’s like a giant Washington D.C. greenbelt. It seems every Indiana home has a basketball rim above the garage.

4:30: The drive from Chicago to South Bend is normally about an hour and a half – kind of like driving from Orange County to Palm Springs. Every time I’ve driven this route, there is always road construction and this time it’s no different. The speed limit fluctuates from 55 to 70 miles per hour.

5:15: Getting off at Exit 77, there’s eventually heavy traffic heading into Notre Dame. The Golden Dome glistens from the reflection of the sun. It all adds to the ambiance of a gorgeous campus that is more like a park setting with all its trees and St. Mary’s Lake. I park on the south side of Notre Dame Stadium. As soon as I get out of the car, it really hits me. It is really, really cold – like hang meat cold with a strong wind. I feel like am working espionage. Shhh, don’t tell them I am here.

5:45: I take some pictures for the WeAreSC photo library, and it’s nice when the campus isn’t so game-day crowded. The Irish pep rally will take place on the “mall” between Touchdown Jesus, the famous iconic mosaic, and Notre Dame Stadium. Everybody is decked out in Notre Dame attire, and there is CD style music blaring from speakers.

5:55: I don’t think the crowd is as big as years past, but they are very vocal. You have to wonder if the weather is cutting down some of the size. Believe it or not, a number of Notre Dame students are wearing short sleeves and shorts. They have to be crazy.

6:00: The rally starts with an MC named Jack Nolan. He pumps up the crowd and reminds them why Notre Dame is so great. He’s not Dr. Bartner but does a nice job.

6:02: The Band of the Fighting Irish opens with the energetic Rakes of Mallow. The crowd immediately gets into it, and several fans are dancing to the beat. At its conclusion, a chant of “We Are…ND” is repeated over and over again. The fans are excited.

6:04: Next on the hit list is “Oh What A Night,” the famous Four Seasons song with Frankie Valli. It is suggested by the MC that it will be quite a night when the Irish give it to the Trojans.

6:07: The Trojans band has their William Tell Overture, so the Irish play their version of the 18th Century Overture. Oh hum.

6:10: Following that little tune, the Irish musicians get into the “Celtic Chant.” ND fans start pumping their fists and arms. A USC fan dressed in a cardinal and gold jacket doesn’t look amused. Following the Celtic Chant, the MC yells, “Are you ready to play USC?” The crowd reacts accordingly.

6:15: The MC then brings to the stage two Pro Football Hall of Famers in former Raiders wide receiver Tim Brown and former Los Angeles Rams running back Jerome Bettis, both ND grads. Brown is wearing a Notre Dame blue jacket and Bettis is sporting a green Irish jacket with a white “ND” hat. Both talk of their love of Notre Dame and their faith.

6:22: Bettis tells a story of why he played so hard and why it meant so much to beat the Trojans. The former powerful running back said, “Coach (Lou) Holtz made sure we understood this rivalry. It is more than a football game. He even made us take a test (about the game).”

Brown tells a different story. The wide receiver great said, “We’re now tied with the Trojans for most Heisman Trophies. Well, they used to be tied in numbers.” Of course that was a swipe at Reggie Bush and the crowd roars.

Brown adds, “This game means so much in recruiting. I have a lot of good friends that went to USC like Marcus Allen. Whenever I see them I raise my hand.” Brown shows four fingers in the air for all the consecutive victories over the Trojans while he played.

6:26: Brown continues his assault on the Trojans. He comments, “It’s been a tough week for the Trojans. They fired their coach…wah, wah, wah. What we need to do is show a little bit of a Raiders or Steelers nation. You can do it. We can put this team away early. They have to fear the enemy.”

Bettis adds, “You have to give it up, it will make a difference, believe me!”

6:29: Irish head coach Brian Kelly comes up on stage with his team. Kelly adds fuel to the fire by saying, “We’ve got that team from California coming from where it’s warm and sunny. We’re going to turn down the heat and turn up the AC. We want them to feel the Midwest weather.” The crowd erupts.

6:34: Now it’s time for a couple of Irish players to speak their mind and the first one up is heralded offensive tackle Ronnie Stanley, the former Las Vegas Bishop Gorman prep All-American. Stanley says, “Being a kid back there, all the best athletes go to USC. I visited those two fine schools (USC and Notre Dame). Let me tell you, the toughest people come to Notre Dame. I promise you this, we’re going to have a good-ass night.”

6:40: Next up is former Santa Ana (Calif.) Mater Dei linebacker Joe Schmidt, the Irish starting middle linebacker. Joe wastes no time saying he won’t be politically correct. He says, “I am also from a USC area and I grew up in the unfortunate 2000s and USC was pretty good. I got into tough discussions with my friends. Last year was my least favorite memory in sports (the Trojans dominating 49-14 victory and Schmidt didn’t play due to injury). It makes me want to beat USC that much more. You know, we’re going to turn the tables and we’re going to win and beat the Trojans.”

6:47: The Notre Dame team locks arms and the alma mater is played. It’s really the only solemn moment.

6:49: The rally concludes with the Notre Dame Victory March. ND fans are now sure the Trojans are going to take a whipping on Saturday evening. One thing I know for sure, it’s going to be colder than a well-diggers lunchbox, and I am bringing an extra jacket and gloves.