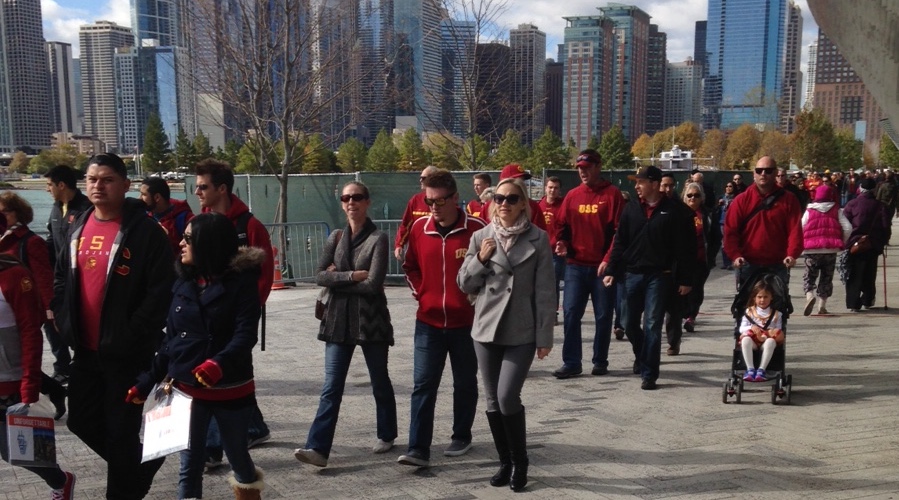 The On the Notre Dame Weekender Road attends one of the true highlights of the 87th meeting of the Trojans and Irish with Friday’s Navy Pier Pep Rally on the shores of Lake Michigan.

8:00 a.m.: Cue up Tribute to Troy, Fight On, and Conquest. We’re just hours away from the ultimate pep rally – the Friday Notre Dame Weekender rally featuring the Spirit of Troy and the incomparable USC Song Girls. There may be no time for breakfast. On second thought, I gotta eat.

8:30: The Holiday Inn Express is offering its standard complementary breakfast, so one must have one’s priorities in order. Since I have no microwave, the oat bran tradition will have to wait to Saturday morning. I adjust just like old Pete Carroll days after halftime. The breakfast is, well, lousy to say the least – kind of like the Washington State defense.

9:30: I am told by the front desk that getting to the Navy Pier in the morning commute on the “55” is a parking lot. They advise me to at least give myself an hour or more to get there. Having been to Chicago many times and knowing the traffic can be just as bad as the L.A. in the morning and the evening, I decide to leave for the rally early, so I don’t stress myself into feeling like a UCLA fan watching last night’s debacle at Stanford.

10:45: After fighting Chicago rush hour traffic that is almost unbearable, I arrive at the Navy Pier, which is a giant version of the Santa Monica Pier. Parking is expensive and it is jammed with cars trying to find a place to park. It’s like trying to find JuJu Smith-Schuster being triple covered.

11:00: The Navy Pier has a large Ferris wheel, a major tourist trap of stores that includes the Big Ten Store, every souvenir you could possibly want at the Chicago Store, and a plethora of eateries, including the popular Harry Carry’s. Parallel with the pier is a fleet of boats for tourists to cruise both on Lake Michigan and up the Chicago River. Looking back towards the Chicago skyline from the Navy Pier is breathtaking with its architectural designs of downtown high-rise buildings.

11:10: The weather is not as chilly as predicted and must be in the 50s and it’s sunny with a few white louds in the sky. The wind is blowing comfortably off Lake Michigan, and that avoids the potential brutal windchill factor of The Windy City. The question now is where on the pier will the rally take place? Some years it’s halfway down the pier and in other years it’s at the end of the pier.

11:15: I am proud to announce that I am wearing the new heavy duty WeAreSC hoodie. It’s heavier than most sweatshirts and thank goodness it is. It wears comfortably as I walk along the side of the pier. It appears the rally is going to be at the end of the pier to accommodate the massive amount of fans walking from downtown Chicago.

11:20: The turnout is outstanding, especially considering the Trojans have two losses and have an interim coach. In fact, as I walk towards the end of the pier with the masses wearing all sorts of cardinal and gold clothing, the conversation seems to focus on Steve Sarkisian and his potential replacement. Fans seem positive that the Trojans are going to surprise the Irish. So far, nobody is selling tickets.

11:25: A small group of Trojans fans are discussing where they drove in from. One fan says he has just moved to Carmel, Indiana, while another said he drove up from Indianapolis. They’re coming from everywhere.

11:40: A fan comes up to me and says his name is Casey and he knows my brother. It’s a small world as they say. I take a picture with Casey, and he seems really fired up to be part of the Notre Dame Weekender and who isn’t?

11:55: The faint sounds of the Trojans Marching Band and its drummers are growing louder and louder and the massive gathering senses the moment.

12:05 p.m.: The Trojans Marching Band along with the USC Song Girls and yell leaders are officially here and the fans go wild.

12:10: Of course, the TMB opens with Tribute to Troy and moves on to Fight On. The only thing missing is a football game, but it too shall be here before long.

12:15: The legendary Arthur C. Bartner, the Trojan band director, climbs up a metal ladder and the best is yet to come if you know the good doctor.

12:16: Fans using their cell phones for pictures are snapping away at a frantic pace. It’s like the kickoff of a USC/UCLA game.

12:18: Bartner leads the crowd in a U-S-C chant. Before the chant begins, Dr. B comments with a brief reference to the UCLA loss to Stanford and the crowd loves it. He turns again to the crowd from high atop his ladder and bellows “Fight On” and the words are returned to him by the fans.

12:19: The TMB plays “Blow Me Away” and the Trojans are hoping they can do that to the Irish on Saturday evening. A band official tells me that over 300 musicians have traveled back to the Midwest and actually 350 when you include the USC Song Girls, yell leaders, and band helpers.

12:20: Bartner tells the band that next up is “Shut Up and Dance,” which brings a lot of energy to the gathering. The USC Song Girls are really rocking out and the fans show their appreciation with a loud ovation. There must be a couple of thousand of fans and it seems everybody is wearing a “Beat the Irish” button. The rally continues with the band playing “Brooklyn.”

12:22: The TMB continues with “Kids are All Right.” It’s a frantic tune and the trombones get their moment in the Chicago sun. It’s actually getting warmer.

12:26: The concert continues with Pat Benatar’s “Heartbreaker.” The Trojans hope to be heartbreakers for the Irish. There is a large cluster of fans standing on top of a Navy Pier building watching the festivities and getting a great view of Lake Michigan, which is as blue as ever. It’s an SRO affair.

12:29: The William Tell Overture is played and the rally is near to coming to a conclusion.

12:32: So what USC pep rally is complete without the playing of “Tusk”? Yes, the fans chant out U-C-L-A S&&#*. Like you didn’t expect it at the appropriate moment?

12:35: Bartner really gets the gathering fired up when he says, “Did we come all this way to lose this game? We lost our coach, we lost our All-American center, but we’re Trojans and we’re going to go into that stadium and take it over. We’re going to chase that Leprechaun out of that stadium!”

12:37: Time has come for the Southern California spellout and the fans respond with vigor.

12:39: It’s also time for “Conquest.” It makes me think of my late Uncle Eddie and how he got me started with the whole USC football saga back in 1962 when John McKay won his first national championship. Conquest still has as much meaning and energy as it did when I was 12-years-old.

12:44: The rally concludes and a group of Trojans and Irish followers pose for a group picture. It might be the last time in the next 48 hours they pose together for anything. Oh, and by the way, two fans just purchased two game tickets at base price.

12:50: All right, time to eat…again, and then it’s the two hour drive to South Bend, and I have to remind myself that the home of Notre Dame is on Eastern Standard Time, which means I have a shorter time to get there. Gotta run!