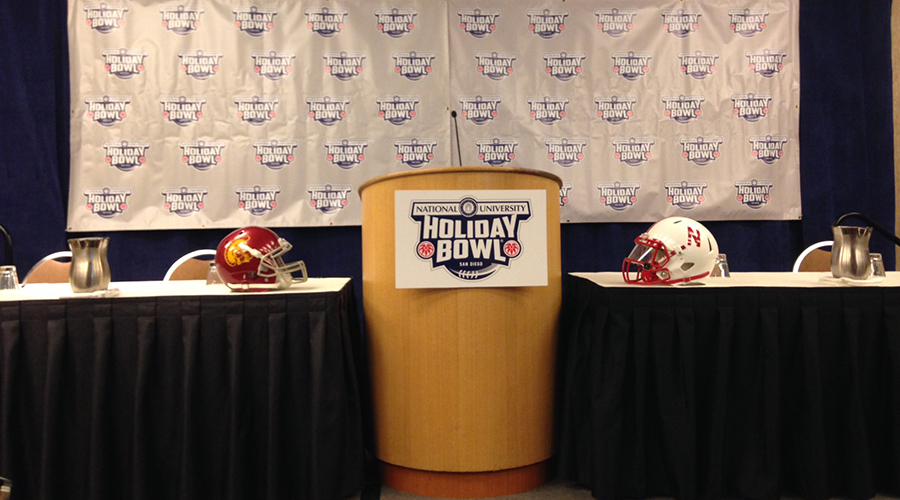 It’s Part 2 of On the Holiday Bowl Road with the Cardinal and Gold, and you’re invited to come along to dinner and the action of San Diego’s Gaslamp District.

5:30 p.m.: After showering and getting relaxed after the morning’s National University Holiday Bowl luncheon aboard the U.S.S. Essex, it’s time to prepare for the evening’s action. First up is a dinner with my best buddy from high school, Bob Lawrence, the highly respected KGTV, Channel 10, San Diego newscaster who has been in this market for over 30 years. Bob is bringing his girlfriend, Bridget, to talk some SC football.

5:35: Right before departing my room, I get a call from old Trojans fan Steve, a Solano Beach native. He says he went to the downtown Balloon Parade with his grandchildren and it was a blast. Steve says he and his wife, Shan, are at the Fox Grill at the Hilton Bayside and there is a ton of Trojans fans whooping it. It’s also the team hotel for the Trojans.

5:40: While waiting for Bob and Bridget in front of the Omni, Trojans backup quarterback Max Browne walks by. Max is braving the cold by wearing shorts. Who says that quarterbacks aren’t tough enough?

6:00: Bob and Bridget arrive in front of the Omni, and they suggest the Fish Market restaurant down Harbor Blvd. Since I love fish like I loved watching Matt Leinart throw touchdowns, it’s a go for me.

6:20: To the surprise of my San Diego friends, the Fish Market is packed with fans, both Nebraska and the Trojans. Just goes to show you that when it comes to food, everybody knows where to go.

7:00: We are finally seated and Bob, about as loyal a Trojans fan as you’ll find, wants to know all about Steve Sarkisian’s team. Bob recalls the good days with John McKay and being with me at the big 1974 comeback against Notre Dame. It seems like everybody remembers that game, even those that weren’t even born yet.

7:20: I order the seafood skewer, which has mesquite-grilled scallops, shrimp, and a mahi mahi type of fish. I also select “finger” potatoes and grilled veggies. Now we’re talking. The salad is excellent. It’s all as satisfying as a Trojans win over Notre Dame. After exchanging stories about our families, it’s time to get ready for a trip to San Diego’s Gaslamp District.

8:30: After dropping me off back at the Omni, it’s time to do some foot-cruising up Fifth Street, or better known as the Gaslamp District. Walk by The Old Spaghetti Factory, and the place is jumping with Trojans and Nebraska fans. Last time I went by “The Factory” was after a Dodgers/Padres Game and saw Clayton Kershaw and his wife walking by and nobody recognized him. I don’t think that will happen next season after all his awards from last season.

8:35: A neon transportation rickshaw comes by with glaring green lights. A guy yells out that Oregon is playing in the Rose Bowl, not the Holiday Bowl. Hmm, how insightful. Those Ducks seem to be everywhere these days.

8:40: To be honest, there doesn’t seem to be as many Trojans and Huskers fans walking the streets as expected. Maybe they’re all in the restaurants or bars taking it all in. Pass by the Rockin’ Baja Lobster establishment and everybody seems “glued” to the North Carolina State/University of Central Florida football game. Now there’s a game to get excited about…not.

8:48: Well, it wouldn’t be a night on the town without running into the two Trojans fans icons – Ed and wife Candy. They’re with a group of other Trojans fans checking out the sites, and Ed says that the Gaslamp is not “jumping” like he thought it would be. Ed and Candy have been down here in San Diego since Tuesday and did their normal greeting of the Trojans team busses upon their first arrival at the Hilton Bayfront.

9:00: You’ve got to be kidding. Nobody is at the famed Dick’s Last Resort establishment. That’s like nobody at Disneyland. Did some UCLA fans spoil the party? Usually the place is jumping, but apparently not the night following Christmas.

9:03: A group of Nebraska clad fans hail a taxi. Maybe these Huskers fans aren’t use to the cool weather as compared to the artic weather of Lincoln and they’ve run out of energy. They seem in a hurry to get off their feet.

9:10: A Trojans fan is wearing a cardinal shirt that has a big diagonal line going through the letters N-C-A-A. Imagine the new shirts on the market if the emails of the Todd McNair case are released to the public. You know what’s going to hit the fan.

9:15: Pass by the Barlemash and it’s full of fans watching multiple screens of various sporting events. Now here’s any eye-opener. Fans get their ID checked and the gatekeeper at the door turns to me and doesn’t ask for ID but says, “You don’t need one, boss.” Wow, I am no longer getting asked for an ID. I guess I’ve turned a new chapter in my life. There are Nebraska fans in the back next to the bar debating if Nebraska’s Heisman winning I-back Mike Rozier was actually better than USC’s Heisman winner Marcus Allen. Wow, somebody has had too much to drink, don’t you think?

9:20: One of my favorite Italian restaurants is on my left called Chianti. When my girlfriend, Sharon, and I are in San Diego, we always go there. Wow, now I am starting to feel lonely.

9:23: A guy is playing an acoustic guitar and an SC fan walks by and asks, “Do you know how to play “Fight On”? The guitarist asks, “How does it go?” Go figure.

9:26: Another Trojans fan walks by wearing a national championship jacket with all the years of the national title running down his left sleeve. Actually, the jacket looks pretty cool and not too gaudy.

9:30: I’ve finally found where all the fans are congregating, and I should have known. The big hangout is the Ghirardelli Chocolate Store that looks like a converted movie theatre. There are so many fans of both teams that you’d think they are giving away free ice cream and chocolate. It just goes to show you that USC and Nebraska fans can sit right next to each other thanks to wonders of ice cream.

10:00: Head back to the Omni to file this story but not before one of those neon rickshaws is blaring out Michael Jackson’s Thriller, and football fans from both persuasions are hoping that Saturday night’s game is not just a thriller but a victorious one at that.

In Part 3 of the On the Holiday Road, it’s Saturday’s pregame report from Qualcomm Stadium, and there won’t be lack of enthusiasm or attendance as the kickoff is almost at hand.