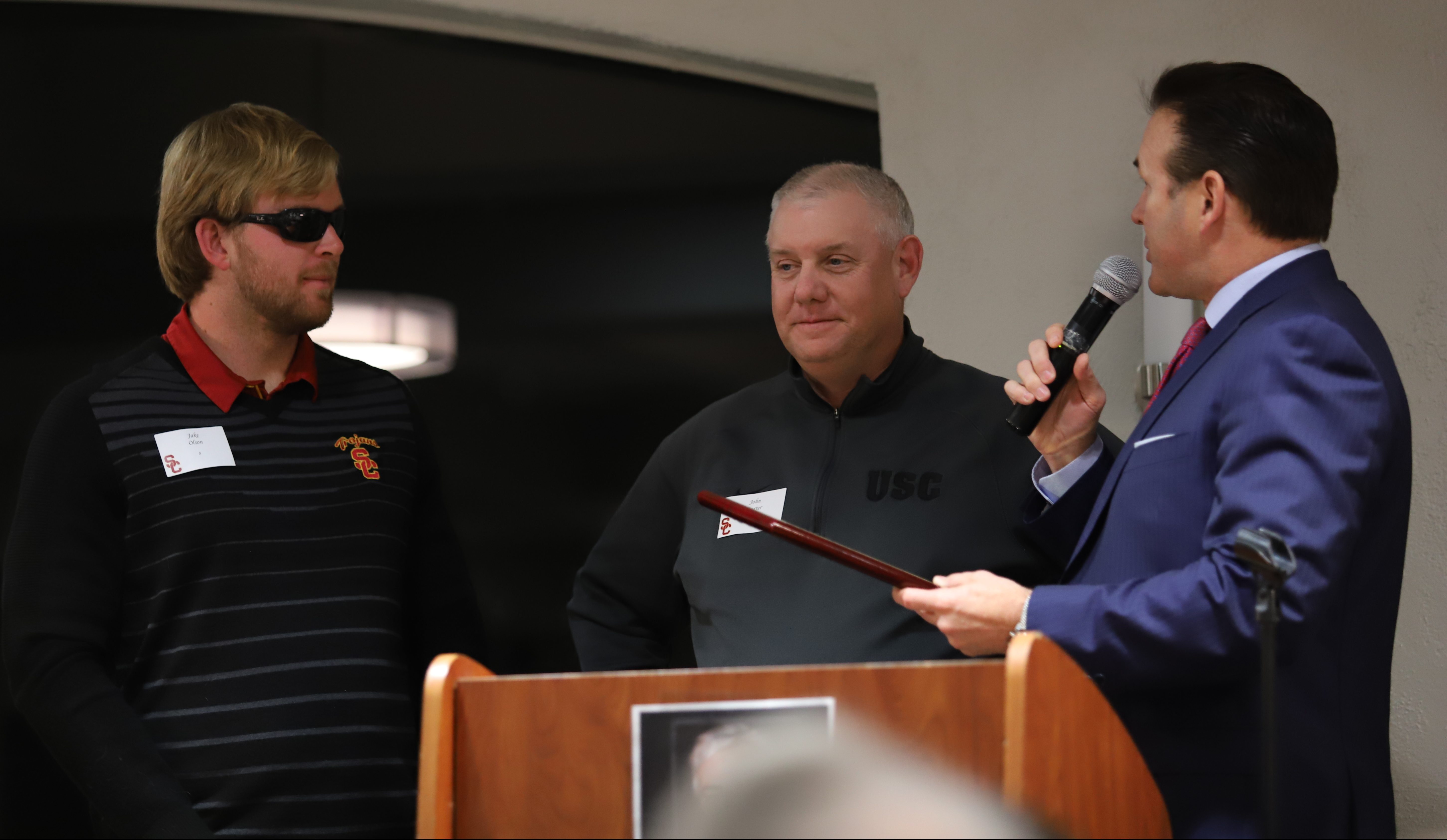 SGV TAF President Sean Kennally began the proceedings with a heartfelt message about the passing of WeAreSC founder Garry Paskwietz, who was a regular speaker at these events. Lizelle Brandt and I were able to say a few words regarding Garry and the future of WeAreSC, and expressed our hope that the relationship between the two entities continues to be a strong one.

Olson took the stage next and he simply has a way of lighting up a room, and Wednesday was no different. Joined onstage by USC assistant coach John Baxter, Olson captivated his audience. After Baxter finished his introduction by mentioning that Olson missed some classes while at USC, Olson was quick to jump in.

“The first day we met, I told him I had class,” Olson said. “But he just kept talking. An hour and half later, he’s still talking and it was too late to go.”

That might have been the only misstep for Olson while at USC, as the story of a blind long snapper walking onto the USC football team has blossomed into so much more.

Baxter said when he arrived back at USC, he and Jake sat down and Baxter said the two of them were going to “figure this out together.”

“It’s been completely rewarding for me,” he said, finishing his speech by saying, “Jake Olson is my idol.”

Olson shared stories about his long snaps against Western Michigan and Oregon State over the past two years, saying that a defensive or special teams touchdown is pretty much a worst-case scenario for a long snapper, since there is no time to get warmed up on the sideline as an offense slowly drives down the field, into the redzone, and ultimately into the endzone.

Olson said he was relieved when head coach Clay Helton took a timeout after Marvell Tell’s interception return touchdown, because he was able to get two quick snaps in to warm up.

Baxter remembered the moment, saying he doesn’t embrace words such as afraid, or scared, or worried. But he will use the word concerned on occasion.

“I’ve never been more concerned before a snap in my life,” he said. “Because I knew how hard this kid worked to get there.”

One year later, Olson was called in to snap against Oregon State, though he almost didn’t hear it.

“I heard someone say to me, ‘If we score, you’re going in,’ only the ‘going in’ part was drowned out by the crowd cheering for Matt Fink’s 52-yard touchdown run.”

Again, with little time to prepare, Olson was called upon and delivered a strike.

As for what comes next, Olson said he is looking forward to a number of projects after signing with United Talent Agency, including TV, books, and “maybe a movie down the road.” Of course, that’s not before joking about his immediate next occupation.

Olson will participate in USC’s pro day on March 20, performing in the bench press and using it to raise money for cancer research.

After that, he’s looking forward to working with his foundation, golfing, and doing his aforementioned projects.

“It’s not really what, it’s what first,” Olson said of his future plans.

Former USC basketball player Desmon Farmer also took the stage during the night for a “Where Are They Now?” segment. Farmer is currently participating in the Big 3 basketball league, featuring a number of former professional players, and teamed up with fellow former Trojan Brian Scalabrine.

But Farmer believes his future lies in coaching. He said he wanted to get into coaching girls middle school and high school basketball because he is passionate about teaching the fundamentals of the game, and believes girls can be more coachable at that age. He’s coached at an AAU program and sent 20 girls to college with scholarships, and recently he has been fielding college coaching offers. But without a degree, he’s been unable to accept those positions.

But now, just two classes away from a degree in sociology, Farmer hopes to be able to get back on the USC sidelines as a coach in the near future.