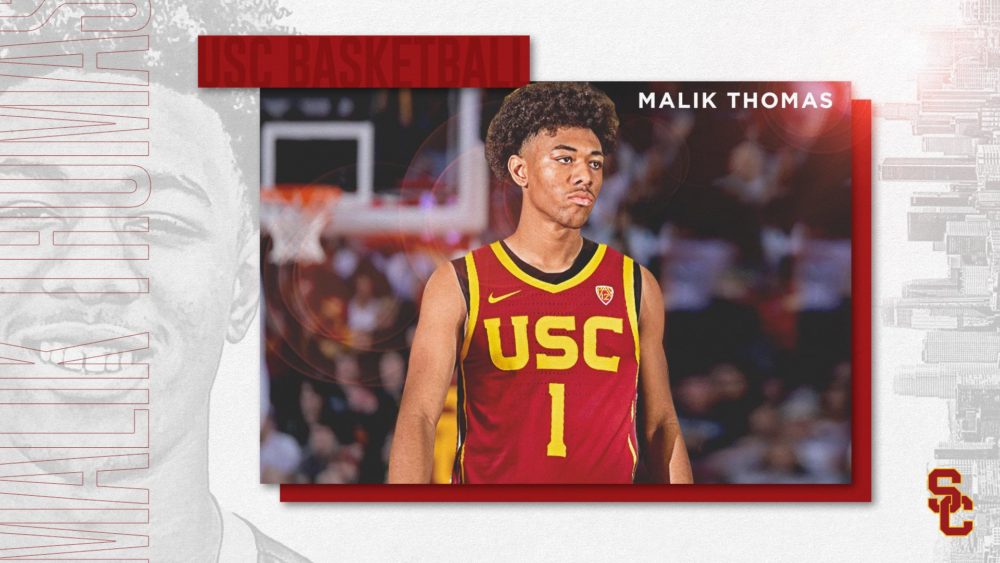 In recent years, USC recruits have piled up a lot of trophies. In 2018, Onyeka Okongwu was named California’s Mr Basketball. In 2019, Big O was the repeat winner while Evan Mobley was the California Gatorade Player of the Year award winner. In 2020, Evan swept all California player of the year awards.

This week, Damien High School guard and Trojan signee Malik Thomas was named the winner of the California Gatorade Player of the Year award. Malik is sometimes called the  “Chosen 1” and possesses a wide variety of skills on both ends of the court. He completed a great high school career and led Damien on a run in post season play, finishing his career with over 2,000 points as the career scoring leader for the Spartans. His impressive AAU play last summer and fall opened a lot of eyes.

Malik is not rated as high nationally as his two state POY predecessors but he is a very complete player. He is strong, has great balance on drives inside and can finish through contact. He is very creative when he rises from the floor to finish inside and can also score from three. He averaged more than 22 points per game in his final season. Andy Enfield likes Malik’s toughness and his defense.

The Trojans return only one true guard in Ethan Anderson, though Drew Peterson and Isaiah White, another former Damien Spartan, will play guard at times.

In need of backcourt help and depth, the Trojans added a very good transfer guard from Memphis in Boogie Ellis and brought in three freshman guards. It will be a surprise if Malik doesn’t get a long look in fall practice and isn’t part of the Trojan guard rotation when the season begins in November.

Fellow fall freshman Harrison Hornery was selected with Malik to the ten-player All Southern California team and was named the Orange County Player of the Year. Harrison may remind some of former Trojan Bennie Boatwright. He made over 42% from three this season at Mater Dei and will give the Trojans a different dimension in the front court.

The recent recruiting success may be the best run in Trojan history. The Trojans also brought in five star forward Isaiah Mobley and five star guard Kevin Porter Jr in the last few seasons. Although USC does not presently have a commit for the 2022 class, most of the highly regarded players have not yet committed anywhere and we can expect that to change for USC this summer.