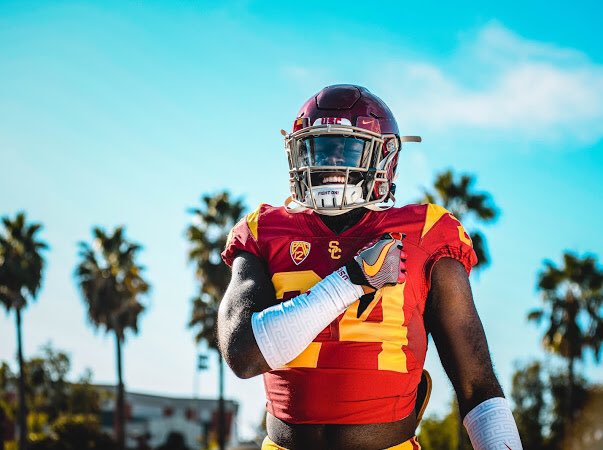 August 1 marked the first day official written offers can be extended to the 2021 recruiting class, and USC’s presence was impressive as Saturday saw a ton of activity on social media as prospects announced their offers.

The text on USC’s official offer reads in part: “It is my honor to officially offer you a guaranteed, four-year scholarship to the University of Southern California, one of the world’s leading private research institutions. this scholarship offer affords you the maximum grant-in-aid permitted by NCAA regulations, covering the full cost of your tuition, room and board, books, and associated fees of enrollment.

USC is committed to providing the necessary support to assist you in reaching your full potential academically, personally, and professionally. we always search for the top candidates to represent our unparalleled history and tradition of excellence both on and off the field. Our coaching staff and administration believe you embody the traits of what it means to be a Trojan and couldn’t be more excited about the prospect of you joining the Trojan Football Family.”

The USC creative/video department also got into the act on Saturday, as several prospects also received flashy videos featuring clips of recent USC football greats as well as some sights and sounds of Los Angeles.

Moss has also been an active recruiter after making his commitment, and he took the opportunity to comment on LSU linebacker commitment Raesjon Davis (Santa Ana, Calif./Mater Dei), who posted a few of his offers, including USC.

These official offers also provide a sense of the legitimate targets still remaining for a program, as these offers are now more of the committable variety, now that they’re official and not simply verbal offers.

Offensive tackle Kingsley Suamataia (Orem, Utah/Orem) is likely the top target on the offensive side of the ball for the Trojans, and few prospects will get as much attention as the offensive linemen over the coming weeks, as he’s said he could be getting close to make a commitment.

Oregon is a major threat here and has been considered the front-runner for some time, but USC hasn’t given up the chase.

And the Trojans are still looking for a second running back in this class, to add to a commitment from Brandon Campbell (Katy, Tex./Katy), and three-star prospect Tavierre Dunlap (Del Valle, Tex./Del Valle) is a real option. This could be another year where the Trojans land two Texas tailbacks, and USC would likely take that, considering how well it worked out with Ronald Jones and Aca’Cedric Ware in the 2015 class, and the need for backs in this class with two seniors on the roster.