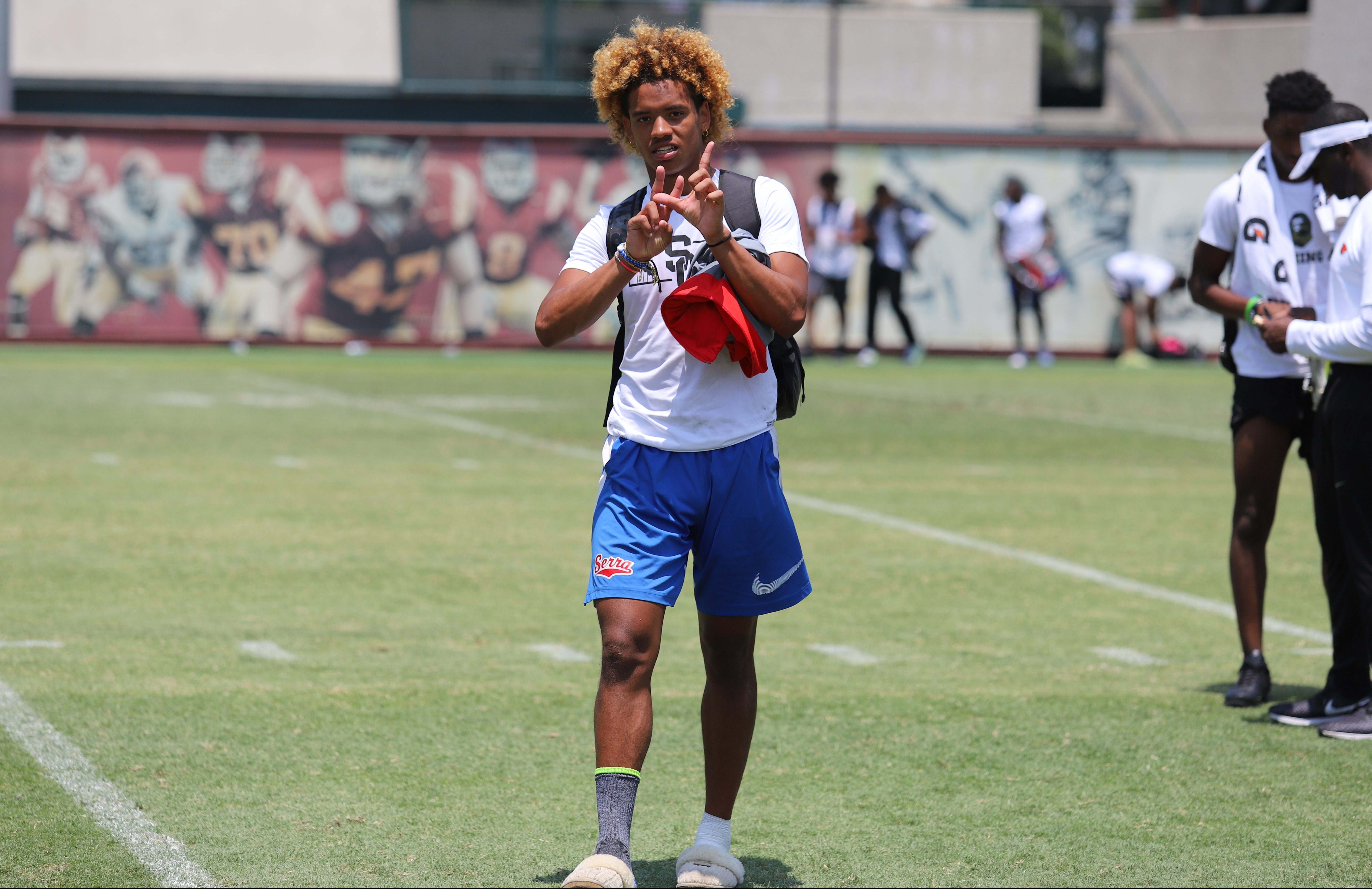 Some of the top Southern California prospects in the 2020, 2021, and 2022 classes were in attendance Wednesday for USC’s second Practice Camp of the summer.

The Practice Camps, which have become USC’s de facto elite camps, giving USC coaches an opportunity to evaluate some of their top targets in a setting that challenges recruits with install and off-field requirements as well as traditional camp aspects such as one-on-ones and seven-on-seven work.

Several prospects on hand already held offers from USC, and one of those prospects put on a show throughout the session, in four-star receiver LV Bunkley-Shelton (Gardena, Calif./Serra).

While Bunkley-Shelton was terrific as a receiver, he also flipped over and spent a lot of time at defensive back (cornerback and safety), which is where USC is recruiting him. He was terrific all day, and showed that he should be a priority recruit for the Trojans.

If there was a defensive back that pushed him for top honors on Wednesday, it was 2021 cornerback Jaylin Davies (Santa Ana, Calif./Mater Dei). Davies doesn’t quite look the part of physical enforcer, but he plays bigger than his size along the line and is so natural mirroring receivers. USC graduate assistant Chris Hawkins was hands on coaching up the defensive backs on Wednesday and it’s likely that he put in over a mile of cardio just running down Davies to celebrate after each of his impressive plays. Davies holds an offer from USC already and is a national recruit in the 2021 class.

News of several offers came out shortly after camp finished.

Quarterback Miller Moss (Mission Hills, Calif./Alemany), was easily the class of the signal callers and had a very good day throwing the ball.

It will be interesting to see if a local quarterback heads to USC following Bryce Young in the 2020 class, but this is a solid offer to a quarterback who has looked good at every event this spring and summer.

Also picking up an offer was linebacker Keith Brown (Lebanon, Ore./Lebanon), who visited UCLA earlier this week before camping with USC on Wednesday. Brown is physically impressive at 6-foot-1, 220-pounds, and has surprising athleticism at that size. He moved well covering players downfield and in a non-padded camp, you could still tell he has a real physical nature about his game.

Brown holds several Pac-12 offers already, including ones from Cal, Oregon, and Washington.

A third offer went out to 2020 defensive tackle Kobe Pepe (Bellflower, Calif./St. John Bosco). The 6-foot-1, 295-pound lineman looked quick during drills for his size and this will likely be a big offer for Pepe, as USC looks to continue pulling prospects from Bosco.

There were a few offers of note that were the first Power 5 offers for several prospects, including 2021 offensive lineman Rolan Fullwood (Lawndale, Calif./Lawndale), a massive prospect who definitely passed the eye test walking into the camp.

At linebacker, 2021 prospect Raesjon Davis (Santa Ana, Calif./Mater Dei) continues to show why he’s considered a top-20 prospect in the country for his class. He moves so well in space. He’s likely never going to be the biggest linebacker out there, but athletically, he’s terrific.

We had another opportunity to see 2022 linebacker Taariq Al-Uqdah (Harbor City, Calif./Narbonne) after he picked up an offer from USC following last week’s camp. There is plenty of potential there and he is another linebacker who moves well in space.

At wide receiver, there was a well-known prospect in 2021 four-star Beaux Collins (Bellflower, Calif./St. John Bosco). He’s already a national prospect and will be right at the top of USC’s wish list when it comes to receivers next year. He was very good today.

One interesting prospect at the camp was 2020 receiver Jahmal Banks (Arlington, Vir./O’Connell), who made the long trip to participate in the camp.

Banks holds offers from several Ivy League schools, as well as Rutgers, Syracuse, and Wake Forest back east. There are a number of wide receivers on the board for USC in this class, so we’ll see if Banks impressed enough to join that list. He was physically impressive at 6-foot-3, and was active during the camp, taking more than his share of reps.

Also in the 2020 class is cornerback Darion Green-Warren (Harbor City, Calif./Narbonne). The former Oklahoma commit is a top target for USC and he certainly did enough during the camp to show why USC is pursuing him in this class.

In the defensive backfield, it’s tough not to be immediately impressed by 2021 prospect Devin Kirkwood (Gardena, Calif./Serra), who stands all of 6-foot-4 at the safety position. He had a good day and really impressed with his ability to recover on deep balls, find them, and knock them away late. Kirkwood was another 2021 prospect who picked up an offer from the Trojans following the event.

A pair of 2022 prospects with early offers from USC also showcased their ability, in Domani Jackson (Santa Ana, Calif./Mater Dei) and Tayvion Beasley (Bellflower, Calif./St. John Bosco). Beasley could be a guy to watch down the line as a big-time cornerback recruit. His instincts there are just terrific.

Neither the offensive nor defensive line groups were bursting with well-known prospects, but USC did get recent offensive tackle offer Andres Dewerk (Los Gatos, Calif./Los Gatos) in attendance. Nebraska, UCLA, and other programs are also in the mix for Dewerk at this point.

There was a familiar name among the defensive linemen, as Tuli Tuipulotu (Lawndale, Calif./Lawndale), the younger brother of USC defensive tackle Marlon Tuipulotu, was in attendance.

Also in attendance but not participating was linebacker Justin Flowe (Upland, Calif./Upland), arguably the top prospect on USC’s board in the 2020 class. Flowe spent time with several members of USC’s coaching staff, as well as watching younger brother Jonathan.