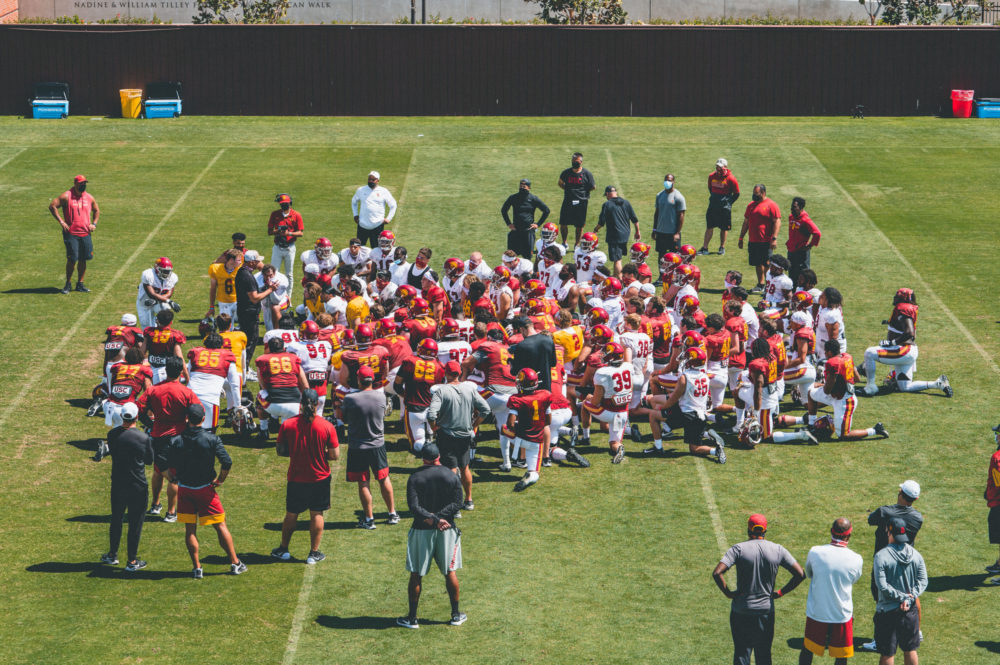 College football recruiting is back in a dead period beginning Monday but the past four weeks of the June recruiting period, which began with a bang on June 1 and didn’t slow down until Sunday night, were glorious. Recruits in the 2022, ’23, ’24 and even ’25 classes crisscrossed the country on official and unofficial visits, able to meet with coaches in person for the first time since March of 2020. USC loaded up all four weekends with official visitors and didn’t go any more than a few minutes without an important visitor on campus.

The Trojans landed three commitments from high school recruits during the month, as well as a college transfer and put themselves in great position to eventually bring more impact prospects into this 2022 class.

Here, we’ll take a position-by-position look on the offensive side of the ball, at how this 2022 class is shaping up for USC as the Trojans staff can take a quick breather from on-campus recruiting for about a month.

Four-star quarterback Devin Brown (Draper, Utah/Corner Canyon) announced his commitment to USC all the way back in September and nothing has changed there. The 6-foot-3, 190-pound prospect did transfer high schools this month, however, and now he’ll be suiting up at Corner Canyon, which produced USC 2021 quarterback signee Jaxson Dart. It will be very interesting to compare Brown’s numbers and success in that program to Dart’s last season, which were off-the-charts incredible. Brown took an unofficial visit to USC this month and was able to spend some time with the USC coaches and some recruiting targets.

With Brown seemingly locked in, attention at the position shifts to the 2023 class, where USC has to top local options in five-star Malachi Nelson (Los Alamitos, Calif./Los Alamitos) and high four-star Nico Iamaleava (Downey, Calif./Warren). Nelson is set to announce his commitment on July 18 and it sure looks like Oklahoma will be tough to beat there. USC has also gone all in on Iamaleava, a fast-rising prospect who will need to fill out a thin frame but has a smooth delivery that puts effortless zip on the ball. He took a national tour of some power programs during the month and grabbed offers from Alabama and Ohio State. He was also on the USC campus for an unofficial visit as the Trojan coaches made him a priority recruit.

USC had two running back additions here during the month of June. The first came from TCU transfer Darwin Barlow, who will join the team for the 2021 season and will look to find his way through a suddenly crowded running back depth chart. He brings some speed to the position and is a well-rounded back, able to contribute out of the backfield as a receiver and in the running game.

A few days after he announced his commitment to USC, his former high school teammate did the same, when three-star back De’Anthony Gatson (Newton, Tex./Newton) picked the Trojans over a host of other offers. Gatson was a freshman at Newton when Barlow was putting up eye-popping numbers as a senior and it’s been Gatson carrying the load at Newton the past two years.

USC isn’t done at the position in this class. The Trojans took a run at five-star back Gavin Sawchuk (Littleton, Colo./Valor Christian) but he announced his commitment to Oklahoma this month. But USC might be in an increasingly good place for four-star back Raleek Brown (Santa Ana, Calif./Mater Dei), who remains committed to Oklahoma but took both an unofficial and official visit to USC in June. The 5-foot-8, 185-pound back is very good between the tackles, but his pass catching ability makes him dynamic on the edge or even in the slot as a receiver. He can do a bit of everything as an offensive weapon. Brown is a top-50 prospect and the No. 4 running back in this class.

USC is also still in the mix for four-star running back Jovantae Barnes (Las Vegas/Desert Pines), who visited Florida State, USC, Texas A&M, Utah and Oklahoma during June. He attends the same high school that produced USC 2021 wide receiver signee Michael Jackson III and Barnes brings the complete package as a running back. He’s 6-foot, 190 pounds with good speed, vision and ability to make defenders miss and pick up extra yards through contact. The four-star back is a top-10 running back and the nation’s No. 108 overall prospect.

USC’s June recruiting run got off to a bit of a head start and it was at wide receiver, when three-star prospect Kevin Green (Mission Hills, Calif./Alemany) announced his commitment to the Trojans on May 31. Like running back, this is another spot where USC is looking help immediately and in the future. The Trojans brought in transfer receiver K.D. Nixon before spring ball and have also announced the transfer of former Memphis wide receiver Tahj Washington. USC also hosted Texas wide receiver Jake Smith on an official visit several days after he officially put his name into the transfer portal.

As far as high school prospects, USC hosted a number of wide receiver throughout June. Arguably the most important is local four-star prospect Tetairoa McMillan (Anaheim, Calif./Servite) who took an unofficial to USC as well as officials to Arizona and Oregon. He’s like to commit in the not-to-distant future and the nation’s No. 67 overall prospect has the ability to become an instant-impact player at the next level.

The other big local target is four-star receiver C.J. Williams (Santa Ana, Calif./Mater Dei) but USC’s hope in that race appears to be flickering. Williams took official visits to Notre Dame and Texas this month and saw Stanford as well. Notre Dame looks like it could be the team to beat at this point.

USC is in a two-team race for four-star wide receiver and track and field standout Isaiah Sategna (Fayetteville, Ark./Fayetteville). He took an official visit to USC this past weekend and now Oregon and USC are the two teams left standing after he initially committed to Texas A&M but backed away from that before visiting USC. Oregon seems to be building some momentum in this one.

USC hosted more wide receivers than any other position group this June. Sategna was joined by four-star prospect Kojo Antwi (Suwanee, Ga./Lambert), who will announce his commitment on July 5 with Georgia, Ohio State, Texas A&M and USC all involved for the No. 115 overall prospect.

The Trojans are on the short list for four-star receiver Chris Marshall (Missouri City, Tex./Fort Bend Marshall), but Texas A&M will be difficult to beat there. Four-star prospect Darrius Clemons (Portland, ore./Westview) has been connected to USC for a while, but he’s originally from Michigan and has some Big Ten leanings. He took an official visit to Penn State this past weekend and the Nittany Lions could ultimately be the choice. Oregon is present in this recruiting battle as well.

Four-star prospects Shazz Preston (Saint James, La./St. James), DJ Allen (Gladewater, Tex./Gladewater) and Nicholas Anderson (Katy, Tex./Katy) all took official visits to USC the first weekend of June, but Preston looks headed to LSU and Anderson potentially to Notre Dame. But it’ll be interesting to watch how Notre Dame’s receiver class fills out, because the Irish are also in on four-star Tobias Merriweather (Camas, Wash./Union). If Notre Dame does land Williams, Merriweather and Anderson, that’s a very strong haul and a pretty direct shot at USC with that position.

USC landed a hybrid receiver/tight end transfer in Malcolm Epps from Texas and the Trojans also hold a commitment from four-star prospect Keyan Burnett (Anaheim, Calif./Servite), who took an official visit to USC this past weekend. With the additions of Michael Trigg and Lake McRee in the 2021 class, grabbing Burnett brings another talented player to that group.

This is where the big questions need to be answered and USC has a number of very talented prospects on the hook. It now becomes about reeling them in. USC hosted seven offensive linemen on official visits during June and six remain uncommitted. A perfect class likely consists of five-star Devon Campbell (Arlington, Tex./Bowie), the No. 10 overall prospect who is definitely serious about his USC interest but will get pulls from Alabama, LSU, Oklahoma and Texas, among plenty of others, as well as five-star tackle Josh Conerly Jr. (Seattle/Rainier Beach), who took an unofficial visit to USC, and four-star Addison Nichols (Norcross, Ga./Greater Atlanta Christian), who is coming off an official visit to USC.

There aren’t many local offensive linemen for the Trojans to target, and the big one, four-star Earnest Greene (Bellflower, Calif./St. John Bosco) took an official visit to Ohio State that reportedly left a big impression. He also took unofficial visits to Oklahoma and Texas.

It’ll be interesting to see if other targets pop up as coaches are able to evaluate more in the months moving forward, and especially throughout the fall as senior seasons play out. USC coaches were able to evaluate three-star lineman Mark Nabou (Seattle/O’Dea) on campus and offered the 6-foot-4, 330-pounder as an athlete, either on the offensive or defensive line.