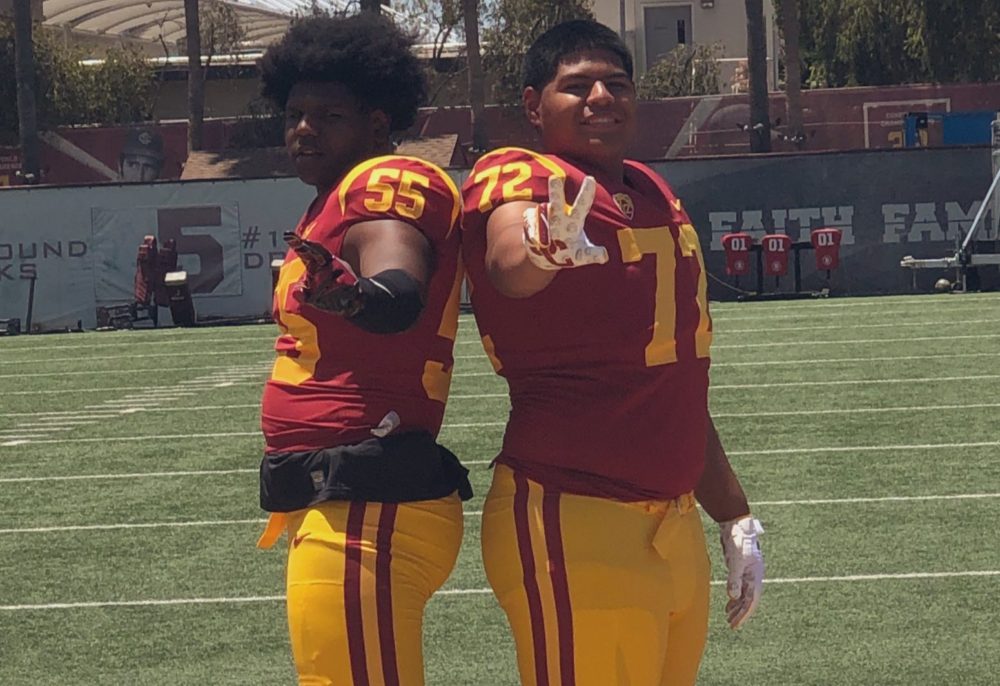 It’s not an indictment of USC’s staff or recruiting ability at this point. There is plenty of time left to put together a great group up front and no shortage of targets still on the table. But it’s a slower start than at other positions as far as tangible results go and all eyes will be on that position group as the class continues to fill out between now and both signing days.

Two notable events took place this week. Early in the week, USC got a visit from five-star offensive tackle Josh Conerly Jr. (Seattle/Rainier Beach), arguably the Trojans’ top target at the position. He’s the nation’s No. 17 overall prospect, No. 3 offensive tackle, and someone who has shown consistent interest in USC. He’ll have his choice of programs when it comes to a decision, and Alabama, Michigan, Oklahoma, Oregon and Texas are all involved as well. Getting him on campus during this June recruiting period was important.

On Thursday, USC extended an offer to three-star offensive lineman Mark Nabou (Seattle/O’Dea). The 6-foot-4, 330-pound prospect has been impressive on the camp circuit this offseason. He committed to Washington at the beginning of June, but picked up offers from Michigan, TCU and Texas A&M on recent unofficial visits. He was back at Texas A&M for an official visit this past weekend and then made the decision to decommit from Washington. He was at USC on Thursday to participate in an in-person evaluation with the USC coaches and earned the offer. The offer came as an athlete, as either an offensive or defensive lineman. USC is in need of big bodies on both lines of scrimmage in this class and it’s clear Nabou has impressed everybody he’s worked out in front of this summer.

Nabou is another Washington offensive line prospect to watch, joining Conerly as well as four-star prospect Dave Iuli (Puyallup, Wash./Puyallup), who is scheduled to take an official visit to USC this weekend. The 6-foot-5, 315-pound prospect is the nation’s No. 194 overall prospect and has already taken visits to Cal, Oregon and Oregon State. Oklahoma is in the mix as well, but Iuli has said he has a solid relationship with the USC coaches.

He’s scheduled to be joined as an official visitor this weekend by fellow four-star offensive lineman Addison Nichols (Norcross, Ga./Greater Atlanta Christian). Nichols is the nation’s No. 103 overall prospect and No. 3 interior lineman. The 6-foot-5, 318-pound prospect has been busy this June and the official visit to USC will be his fifth. Previously he’s seen Florida, Georgia, Ohio State and Tennessee. The connection between Nichols and USC hasn’t been at the same level as it was with fellow Georgia prospect Mykel Williams (Columbus, Ga./Hardaway), who developed a very strong relationship with the Trojans and ultimately committed, but there has been a longstanding back and forth and USC should have a shot if the coaches can hit a homerun on the visit.

Looking back to last weekend, USC hosted four-star offensive lineman Neto Umeozulu (Allen, Tex./Allen) on an official visit, and the Trojans hope to make this another class where they can grab an offensive lineman out of Texas.

The Trojans also saw one of their top offensive line targets head out of state for a bit, with four-star lineman Earnest Greene (Bellflower, Calif./St. John Bosco) raving about his unofficial visit to Ohio State last week and now hitting both Oklahoma and Texas at the end of this week. The big lineman has been casting glances out of state for a while and this could be turning into a tough battle for the Trojans to keep him home.

And USC got an unofficial visit from talented 2023 offensive tackle Taliafi Ta’ala (Sandy, Utah/Alta) early in the week. The 6-foot-7, 280-pound prospect will be a major Pac-12 target next year and he picked up an offer from USC this past spring, in addition to offers from BYU, Oregon State and Utah.

A few names to watch in the 2022 class might have been added to the list this week, when a few prospects who train with GiantSkillz came out from Utah to the USC campus to participate in some evaluations with the coaches.

One of the participants was three-star guard Tapuvae Amaama (Lehi, Utah/Skyridge). The 6-foot-4, 340-pound interior lineman holds offers from BYU, Colorado State, Hawaii and others, but was excited to get the opportunity to work out in front of the USC coaches, including Clay McGuire and Toa Lobendahn, who Amaama said he’s looked up to for a long time.

Amaama said the evaluation was about getting in some work and hopefully getting on the USC radar, and he took all the feedback the coaches gave him. The most interesting aspect about Amaama is that he’s only played football for two years, and he believes where he is now as a player is so different than where he was a year ago.

“I’m more comfortable with the sport and the position,” he said. “Recruiting is starting to pick up. I know I can play at that level. I just have to show them.”

Amaama’s older brother played at Utah several years ago, and before that, was often at the same recruiting camps as Lobendahn, as well as Viane Talamaivao. That connection still exists between those families.

Amaama was heading from Los Angeles down to Miami to participate in the Miami Paradise camp this weekend. He’s looking to get as much time in front of coaches as possible this summer.

It’s still too early to tell exactly where his recruitment could finish and what schools could be involved by the time his senior season is finished. But he’s doing everything he can to put himself in the best position.

“I’m going into my senior year and I want to leave with a bang,” he said. “A lot of coaches at these P5s (Power 5 schools) want me to wait it out and finish my senior year before they make a decision. They believe I could be a P5 guy.”

Amaama’s workout and unofficial visit coincided with Conerly’s trip to USC. The two met last year around this time at a GiantSkillz event in Utah and hit it off.

“We just clicked,” he said of the five-star prospect. “He’s always been helping me with the process.”

Amaama worked out at USC along with fellow Utah prospects Peter Falaniko (St. George, Utah/Pine View) and Vae Soifua (Orem, Utah/Orem). Both are three-star prospects with BYU offers, as well as some others.