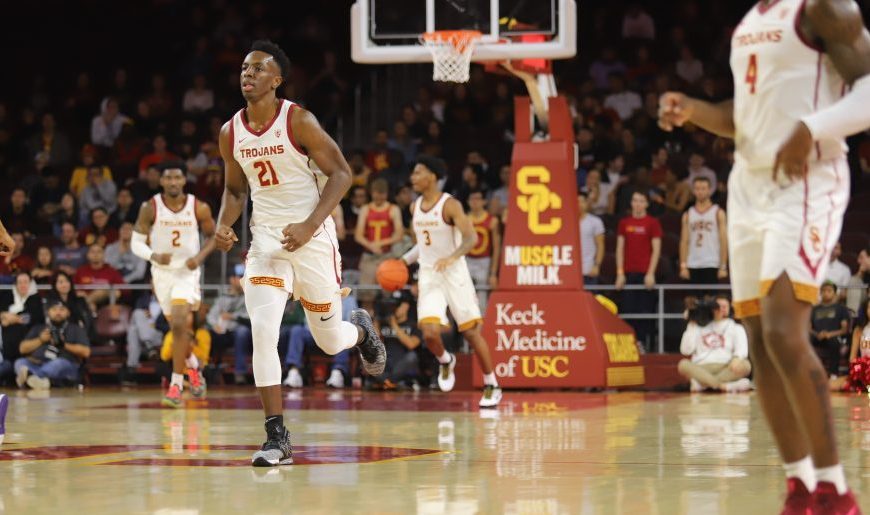 The Trojans are now 4-0, coming off a 10 point win at Nevada on Saturday night. After 4 games, SC is shooting 44.4% from the field, 32.5 % from three, and 65.1 % from the line. All of these offensive numbers need to improve as they move into the heart of the schedule; to this point, the guards are not shooting well. After this week, the Trojans play three games at the Orlando Invitational over the Thanksgiving weekend.

Six players are averaging 21 minutes per game or more, freshmen Onyeka Okongwu, Isaiah Mobley and Ethan Anderson, sophomore Elijah Weaver, and seniors Nick Rakocevic and Jonah Mathews. Grad transfers Daniel Utomi and Quintin Adlesh average just under 20 minutes. Of that group, the three bigs are making a very high percentage of their shots. Isaiah is making 2/3 of his shots (though he has taken far fewer shots) and Big O 62% and Nick 58%. These are tremendous numbers.

But it is a different story for the guards. Elijah is hitting 42% from the field, Quinton 33%, Jonah 31%, Daniel 30%, and Ethan 24%. The three point shooting percentages are worse for all of the guards except Q. This is where the biggest improvement is needed. Bigger and better teams than the four the Trojans have beaten will try to limit the inside production and force the SC guards to shoot well enough that the opposition can’t drop down to double team every time the ball goes inside. Big O is very quick with his shot and will be harder to double team. Nick and Isaiah are generally more vulnerable to double teams, but Nick is a great interior passer. All three score on quick put backs off offensive rebounds when a double team is difficult. Isaiah has a big size advantage when he is on the perimeter and should begin to take better advantage of opportunities from 12 feet and out.

The other area of major concern in the early going has been turnovers. In the first two games, SC averaged 18.5. The last two games have been much better, and the average is down to 14.0. Last year’s 11 per game was exceptional, and this team can achieve like numbers. The two freshman point guards have been tremendous in assist to turnovers. Ethan has 27 assists and only 5 turnovers, over 5-1. In far fewer minutes, Kyle Sturdivant has 6 assists and 2 TOs. Elijah Weaver has not been as good with the ball, with 12 assists and 8 turnovers, which is why he is not considered a true point guard. He plays off the point when he is in the game with one of the freshmen points.

Pepperdine and Temple are two solid teams, who each have some players that can cause problems. They both have high profile coaches. Let’s take a deep dive into them both.

Tuesday November 19 vs Pepperdine at 6:00 at Galen.

Saturday night the Waves beat Abilene Christian 73-69 on the road to move to 3-1. They lost by 16 at Cal in their opener. The margin and maybe the result were surprising, because Cal is expected to finish near the bottom of the PAC 12 this year. The Waves then bounced back and beat a strong UCI team at home by 4 and beat CSU Bakersfield on the road by 12.

Pepperdine finished 16-18 last year, in the first year of Head Coach Lorenzo Romar’s second tour with the Waves. They are picked to finish 4th in the strong West Coast Conference, behind the usual conference leaders Gonzaga, Saint Mary’s and BYU. Romar began his head coaching career with the Waves in the ‘90’s, before going on to St Louis and then beginning a 15 year run at Washington. With the Huskies, he had some good success, and some bad seasons. He won one PAC 10 title, went to 2 Sweet 16s, made the NCAA Tournament six times and the NIT 3 other seasons. But he did not lead the Huskies to the Big Dance in any of his last six seasons and was let go.

The Waves have at least four players who will catch the Trojans’ attention. 6’8” sophomore forward Kessler Edwards and 6’1” junior guard Colby Ross are preseason all WCC picks. Edwards is off to an exceptional start, averaging 17.8 points, 8.3 rebounds and shooting 58% from the field 63% from three. Ross is averaging 17 points and over 8 assists per game, but is shooting only 34% from the field and 36% from three.

The Waves are an entertaining team to watch. None of the players the Waves rely on is taller than 6’8”. The four listed above are playing heavy minutes, and as a team, they rely on their outside shooting, but are making only 32% of their threes. This game will match the Trojans size against the Waves guards.

Friday November 22 against Temple at 8:00 at Galen

The Temple Owls will travel to LA for their first game against SC since 1994. The Owls have a storied basketball history, going back several decades. One of their own, former player Aaron McKie, has taken over as head coach. The team was 23-10 last year and finished third in the very tough American Athletic Conference (AAC), which features basketball powers Memphis, Houston, Cincinnati and Wichita State. In this season’s media poll, the Owls are picked to finish seventh in the twelve team league.

McKie was an Honorable Mention All American player at Temple, and was drafted with the 13th pick in the NBA draft. He had a 13 year career, including one season named the 6th Man of the Year. He was an assistant on the 76ers staff for six years, and then moved to Temple as an assistant for the last five years. He begins his head coaching career with a good roster with some experienced offensive players. The Owls are off to a 3-0 start, beating Drexel by 5 and Morgan State by 18 at home, and then traveling across town to beat La Salle by 5.

The team is only 215th in the nation in field goal percentage at 43.7% and 251st in three point shooting percentage at 33% and is 211th in rebounds per game. None of these numbers impress, but they are undefeated. 6’8” senior guard Quinton Rose is a preseason first team All AAC selection. In the first three games he is averaging 16 points and shooting 35% from the field and 43% from three over 30 minutes per game. 6’4” junior guard Nate Pierre-Louis, a second team All AAC preseason selection, has been the best player in the early going. He is averaging 18.7 ppg, shooting 47% from the field, but is only 1-8 from three. He is averaging an amazing team leading 11 boards per game as a guard, and 4.3 assists, and has led Temple is scoring each game. He plays 32 minutes per game.

The third leading scorer is 5’10” senior guard Alani Moore II, averaging 10.3 ppg while shooting 34% and 26% from three. He also is playing 30 minutes per game. The other two starters are both 6’7” forwards, who don’t score a lot. JP Moorman II averages 6.3 rebounds per game. 6’11” senior center Damian Moore averages 5.5 rebounds but only plays 12 minutes per game. Look for Moore and 6’10” junior forward Justyn Hamilton to play more minutes to try to offset the Trojans size.

Pepperdine and Temple are solid mid major teams this year, and both have some good players. The Trojans will try to get production from their three big men, who will have a size advantage inside unless their opponents go to taller reserves who haven’t played a lot. Expect to see to double teams when the ball goes inside, or the Waves and Owls to play a zone designed to keep the hall from going inside and double team when the ball does get to one of SC’s bigs. Neither Pepperdine nor Temple shoot the ball well enough to offset the Trojan bigs  I expect two entertaining games and look for Troy to win both in hard fought games by double figures.