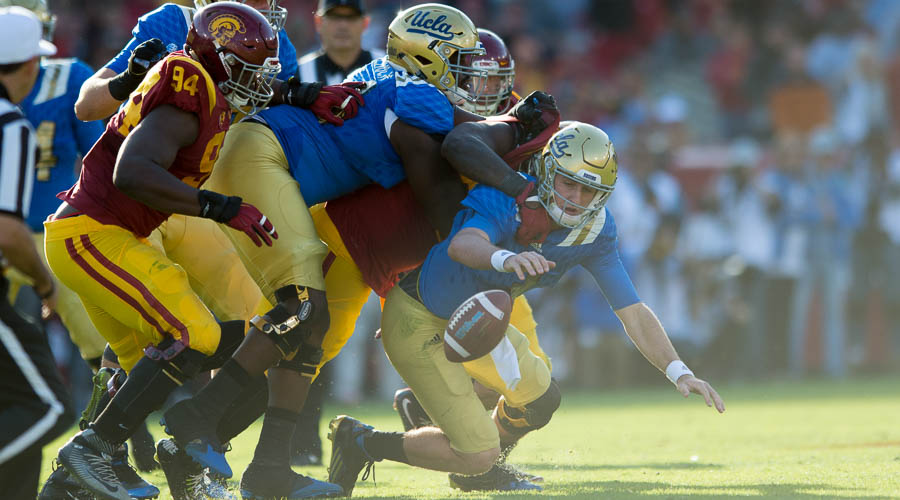 As the spring evaluation period comes to an end and we await the start of summer workouts, here are some thoughts on what stands out from each of the opponents on the USC football 2017 schedule:

A bit of an unknown considering how much change there has been with the Broncos since their impressive 13-1 record from a year ago. They have a new coach following the departure of P.J. Fleck to Minnesota, a new quarterback to replace the all-time school leader in passing yards, and a new receiver to make up for the loss of the NCAA leader in career reception yards. That’s a lot to overcome when facing a loaded USC team in the opener at the Coliseum.

No sense messing around, let’s go ahead and find out right away where this Trojan team stands by taking on the team that has caused a lot of early season troubles in recent years. It’s nice to have this game at home, it’s nice that there is a bit of uncertainty at quarterback for the Cardinal and it’s going to be hard for them to easily replace the talents of Christian McCaffrey (although I think they will have a good run game) but this game isn’t really about any of that. This is a big-man on big-man game as Marv Goux used to say, and USC can make quite the statement (to others and to themselves) if they come away with a physical win.

I want no part of this game. Let me re-phrase that, I want no part of the build-up the week coming into this game. It’s not that I’m overly worried about the Horns under first-year coach Tom Herman, what I’m dreading is the focus that so many media will put on the game that was played between the two schools 11 years ago. I haven’t wanted to watch any replays of that game since but you can be sure the shot of Vince Young dashing around the right end for the score will be shown about a zillion times as we get ready for this one. Ugh.

The first road trip of the season is a short one to face a Cal team that is also transitioning to a new coach, a new quarterback, etc. It figures to be a game the Trojans should handle, and not one that Clay Helton will be looking to mess around with. There is so much good momentum going on with Helton’s program these days and one of the things that could bring some fan unrest would be a loss to former Trojans DC Justin Wilcox, USC fans would not look kindly upon that.

I’m not going to use the word “trap-game” because that can mean so many things. But….the thought of going to Pullman on a Friday night to face Mike Leach and a veteran quarterback in Luke Falk, well, I’ll be glad when this one is over if the Trojans are able to come away with the win. The QB match-up between Sam Darnold and Falk should be one of the best of the year.

After two weeks on the road the Trojans will come home to face the Beavers in another game that will be viewed as one USC should win. Oregon State has been off the Trojans schedule for a couple years and in that time there has been a coaching transition to Gary Andersen that hasn’t really taken hold yet. Will the home fans be treated to the kind of win that allows for extended reps to the reserves?

This next two week stretch is a pivotal one in the middle of the season and it starts with a Coliseum visit from a Utah team that knows they can match-up with the Trojans. The Utes will have a senior quarterback in Troy Williams who hails from Narbonne HS and will be playing his final college game in the Los Angeles area, he’s also coming off a dramatic victory over USC last season.

The last time USC traveled to South Bend it was with an interim coach in Clay Helton who had only taken controls of the program earlier in the week after Steve Sarkisian couldn’t function at a team meeting and was eventually fired. There was a lot of turmoil surrounding the Trojans at the time and they fell short in that game when the Irish physically controlled the fourth quarter. Things are much more settled in the Land of Troy these days, to put it mildly, while Notre Dame and Brian Kelly are dealing with plenty of drama of their own. Beat the Irish.

It wasn’t too long ago that the Sun Devils looked like a program ready to challenge the upper levels of the Pac-12 but they’ve had some upheaval too and it’s hard to know what to expect from them. There are some proven running backs in Demario Richard and Kalen Ballage but things aren’t clear at quarterback, and there are other holes as well.

You can pretty much put the same outlook on Arizona as on Arizona State. There was a recent time when Rich Rod had his program trending up with a young quarterback but it’s hard to imagine this is the same program now. The Wildcats will pin a lot of hopes on talented young quarterback Khalil Tate, and he certainly brings a lot of skills to the table, but it probably won’t be enough against the Trojans in the Coliseum as they prepare for another November run.

The Buffaloes were one of the biggest turnarounds of the 2016 season, unfortunately they lost a ton of seniors and the outlook isn’t quite as bright for the coming year. Among the losses were three defensive backs selected in the NFL draft, not exactly a recipe for success when getting ready to face Darnold and company.

The final regular-season game of the year with so much potentially on the line and a chance to continue to rivalry with the Bruins. It doesn’t take much to get the blood pumping for this one but consider the scenario of all that could be at stake for USC after running the gauntlet of 12 straight game weeks. It will also be a chance to cheerfully welcome Josh Rosen back to the Coliseum!